Negative coverage has done little to dissuade investment in vaping. Are these latest headlines any different?

One need only look at recent headlines to know that the vaping industry is facing a barrage of criticism on a number of fronts. At least six people have died and hundreds sickened from a mysterious lung disease reportedly linked to vaping, and officials—including the Trump administration—have ramped up calls for outright bans on many popular flavored products to curb teen abuse.

Recent news aside, a Quid analysis revealed that public perception of the industry has been shifting over the last few years from vaping as a smoking cessation tool to an “epidemic” trending among teenagers. At the same time, despite this shift, sales have skyrocketed and investment in 2019 has already eclipsed the previous year’s total.

Negative press hasn’t visibly impacted investment to date, but how does recent coverage compare to larger trends seen over the past few years? Quid looked at nearly 2,500 articles on vaping from the past 3 years, as well as 782 companies in the industry to better understand the evolution of the industry and its public narrative.

If you look at the total volume of coverage around vaping from the past three years, teen use represents the largest topic area (34%), followed by vaping as a smoking cessation tool (28%), regulations around the industry (23%), and associated health risks (13%). 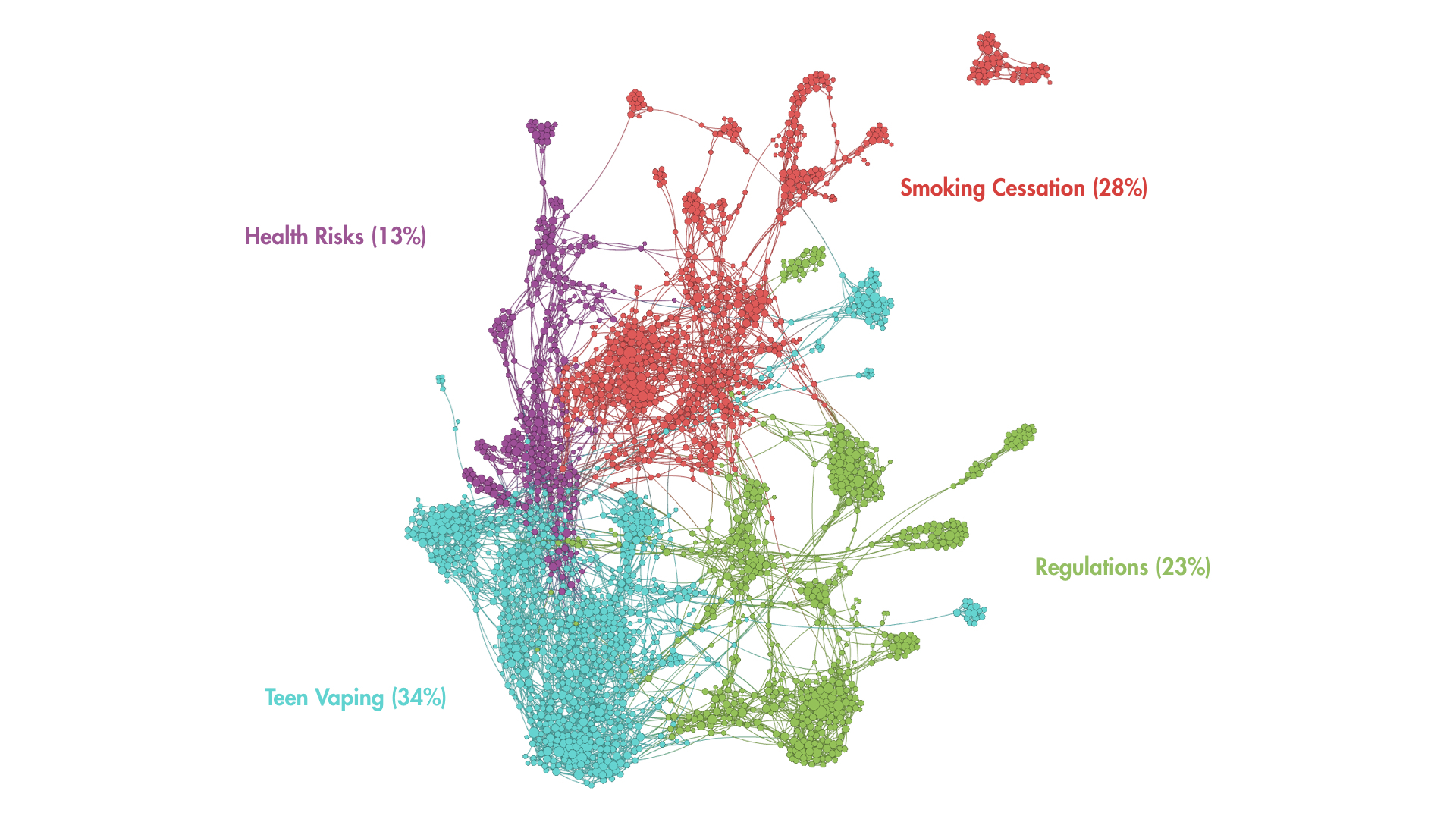 News network showing 2,437 articles on vaping from the past 3 years. Colored by tag.

Negative coverage outpaced positive coverage 4:1, with health risks emerging as the most damaging topic area for the industry’s public image.

During the entire three-year period, only 11% of stories written received a positive sentiment score, compared to 44% negative and 46% neutral. Broken down into specific topic clusters, the only one to receive a distinct area of positive coverage was the debate about vaping versus smoking (9.7%). Articles here discuss some of the benefits of e-juice, how vaping can help long-term smokers kick the habit, and even save smokers in the UK nearly £350 per year. 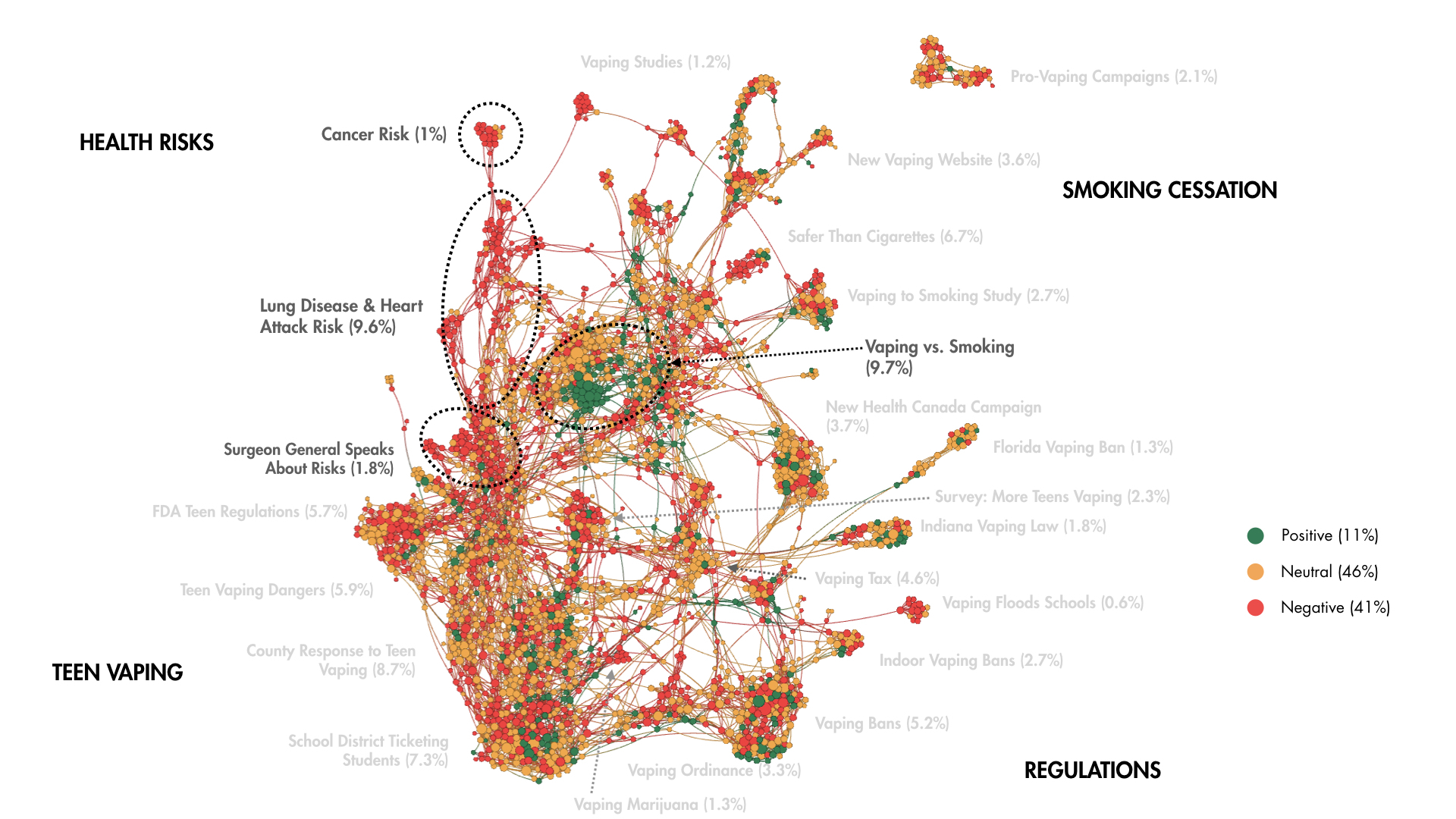 News network showing 2,437 articles on vaping from the past 3 years. Colored by sentiment with top positive and negative clusters highlighted.

But when it comes to health risks, negative coverage shot up to 64% overall and even higher for specific cluster areas like cancer risks (84% negative), the Surgeon General’s comments about vaping as a “major public health concern” (80% negative), and lung disease and heart attack risks (63% negative). Health risks, though comparatively smaller than other topic areas in terms of the volume of coverage, also received the highest social engagement from online readers, followed by efforts by officials to ban, tax, or regulate products. Areas that drew higher media interest—such as smoking cessation—received lower engagement rates online, showing a disconnect between media coverage and reader interest. 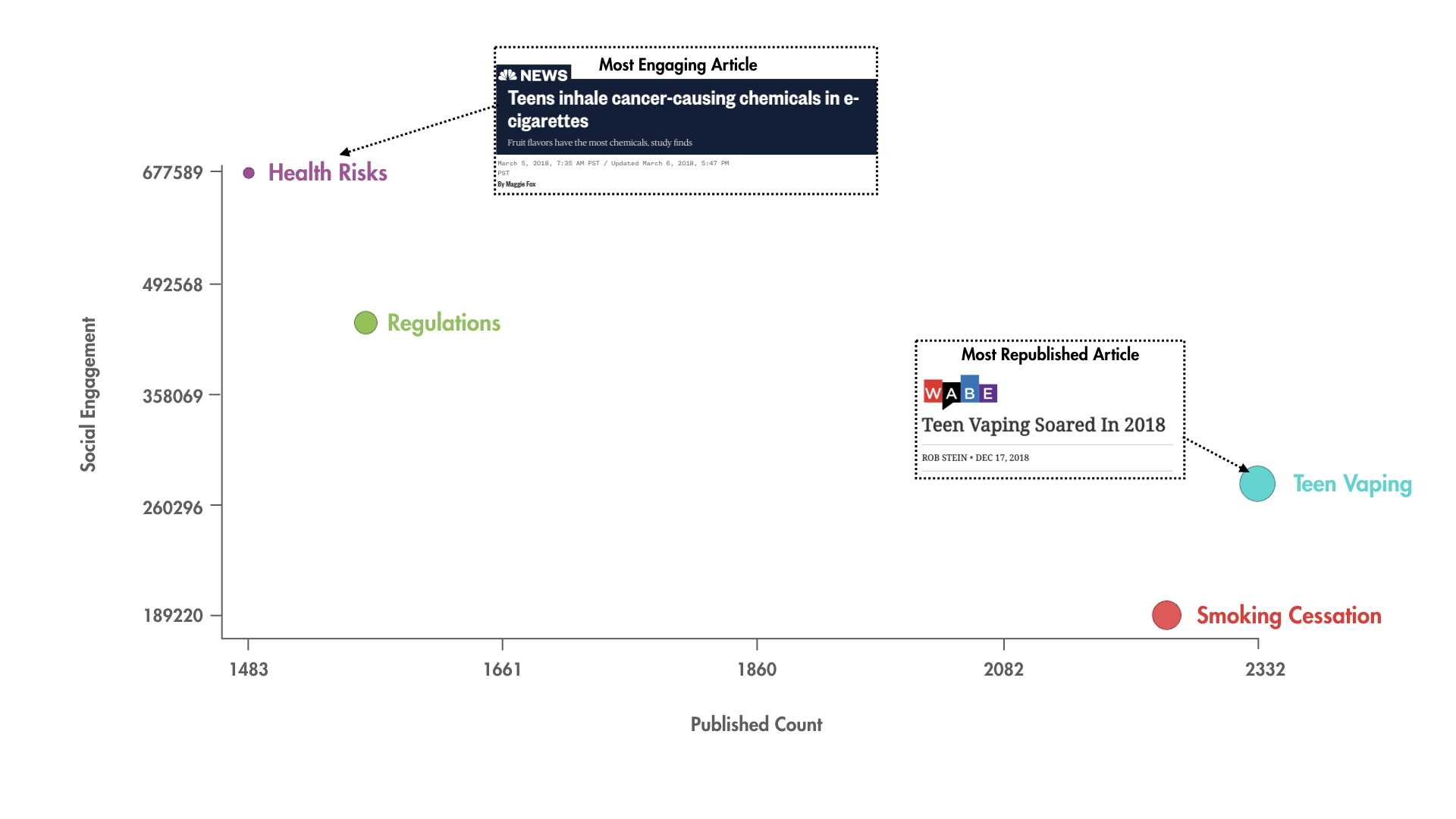 Analysis shows a distinct narrative shift from more positive coverage of vaping as a less-harmful smoking alternative, to criticism around the explosion of teen users and health risks posed from products.

When viewing the percentage of coverage received by each topic area by quarter, you can see a decline in the rate of stories focused on the smoking cessation theme (seen in red), while teen vaping (light blue) has risen.

Meanwhile, in the most recent quarter, health risk coverage rose to its highest rate during our three-year period and will likely continue to rise given the news of a six death tied to product use. 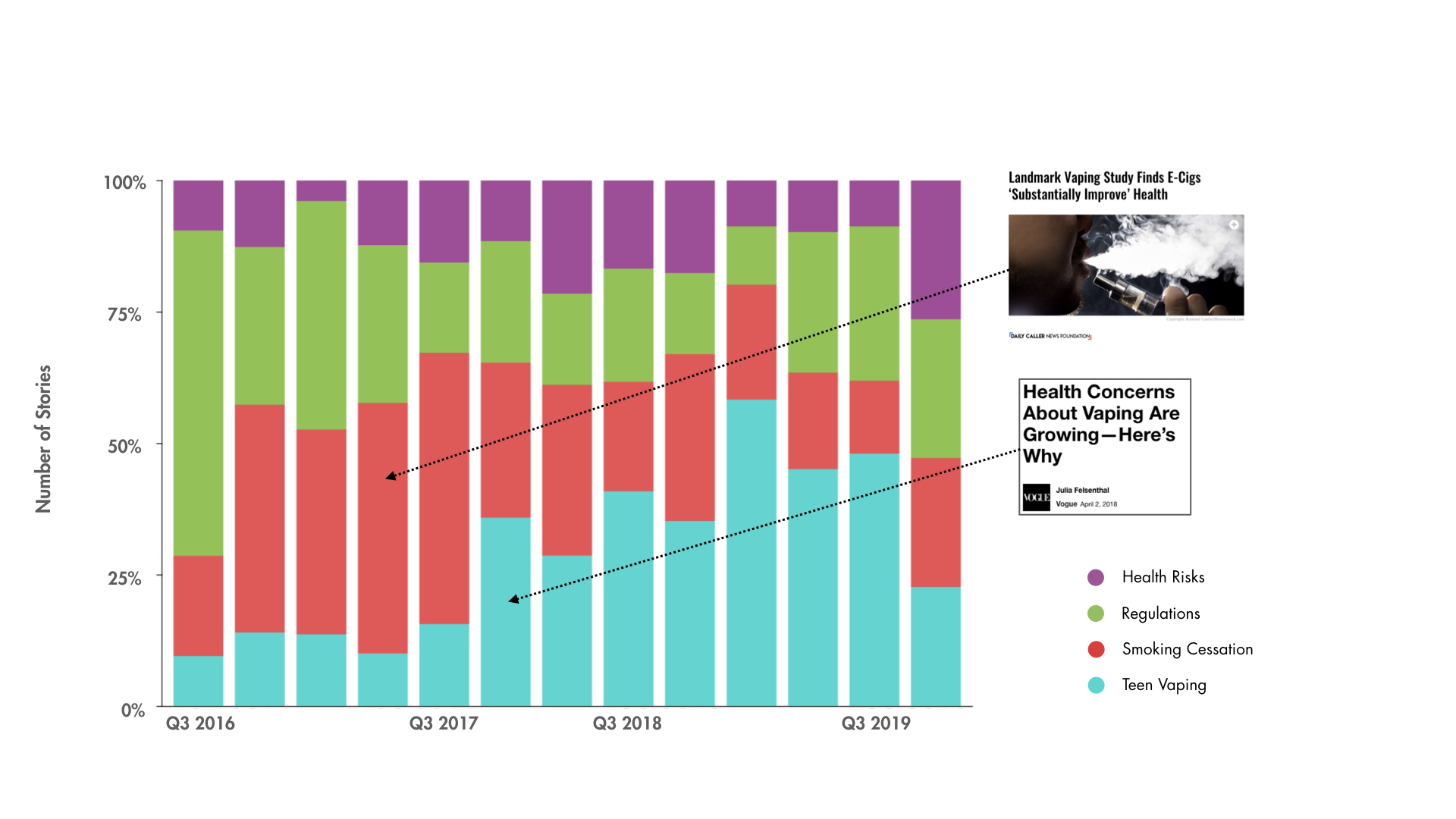 A deeper dive into health risks coverage reveals that customers are highly engaged with news about risks from lung disease, heart attack, and cancer.

Stories about lung and heart risks received higher online engagement rates than news of the Surgeon General’s warning about the dangers of youth vaping, though the latter captured a greater share of media attention. Public interest in this highly negative topic area should be especially concerning to the industry, given that they are currently facing backlash for deaths linked to a mysterious lung disease.

Articles from the past few weeks cover recent hospitalizations and deaths from both local and national perspectives (“Doctor weighs in on vaping after local man nearly dies,” KMOV), and look at the potential impact of recent health scares on the industry (“Milwaukee vape shop sees dramatic decrease in sales amid outbreak,” WTMJ).

One topic that is engaging online readers but hasn’t received much media attention is cancer risk. As seen in an earlier graph, the NBC article “Teens inhale cancer-causing chemicals in e-cigarettes” was the most widely shared of any article in our data set. 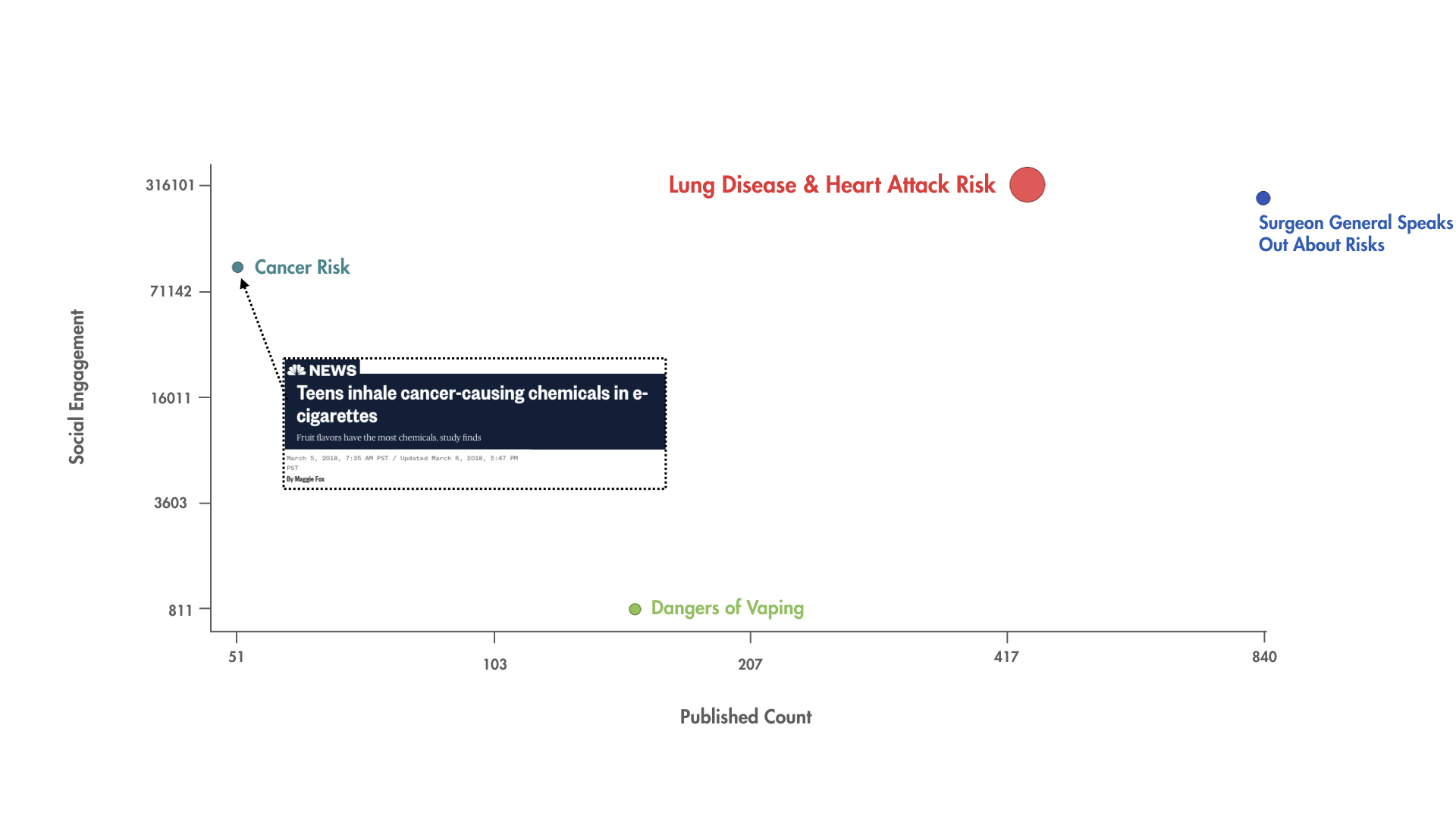 Prior to 2010, companies focused more on packaging and big retailer distribution. Since then, the industry has diversified in terms of products and retailers. High growth areas include e-juice manufacturers—particularly those who produce flavored products—cannabis devices, and online retailers.

Two of these high growth areas have received mounting criticism in the press and face potential bans at the city, state, and federal levels: flavored e-juice manufacturers for their appeal to teen users, and those producing cannabis vape products for their perceived link to the current outbreak of hospitalizations and deaths.

Despite negative headlines, coverage around health risks and regulation have not threatened skyrocketing investment to date.

Investment peaked to record highs in 2018 when JUUL received $14.1 billion, including $12.8 billion from  Altria Group, the owners of Philip Morris USA and makers of Marlboro cigarettes. For easy viewing, there are two charts below (for comparison, the inset includes the Juul investment). Even without Juul’s industry-record investment, growth remains impressive. So far, the rest of the industry has raised over 250% more in 2019 than in 2018. 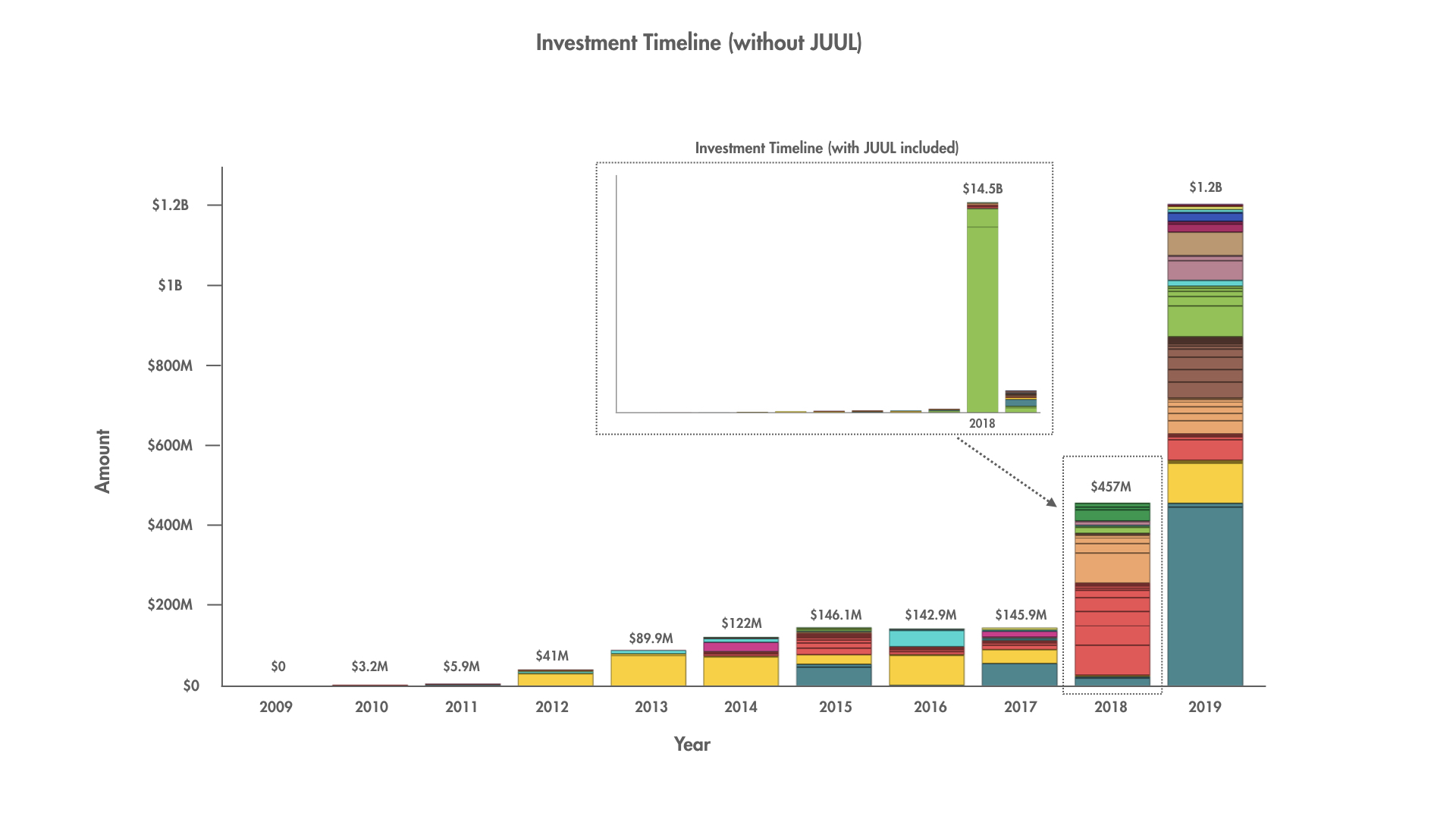 When comparing the investment timeline with the timeline of news coverage around topics that might threaten industry growth—health risks (purple) and regulation (green)—investment actually spiked after news coverage of these topics reached their peak. Combined, these topics were most visible in the public narrative from February to April 2018. Just six months later, JUUL received $1.3 billion in private investment and then another $12.8 in December 2018. 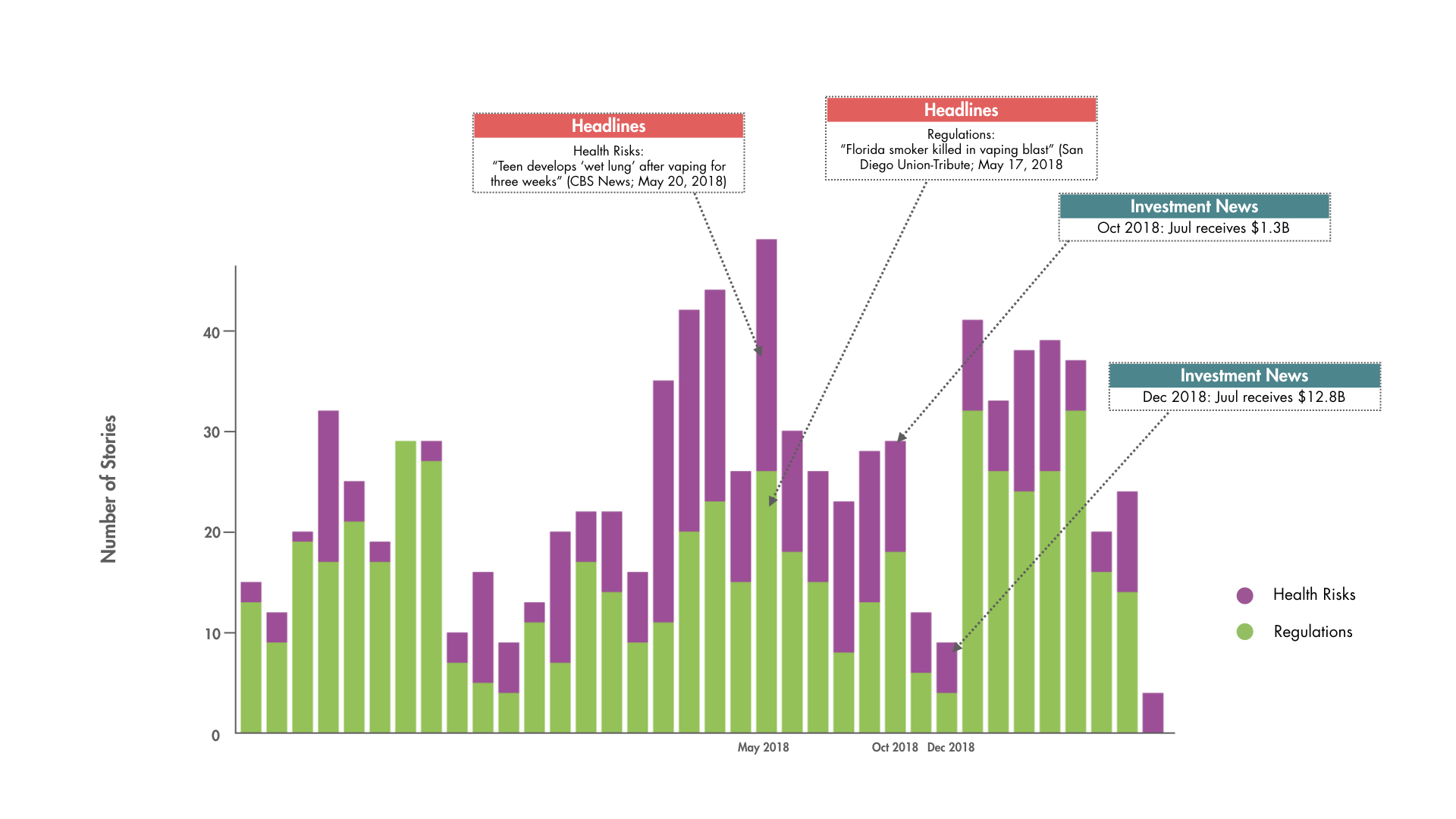 In addition to the billion dollar investment in JUUL from the owners of Philip Morris USA, large tobacco companies represent three of the four top acquirers in the industry.

Top acquirer, British American Tobacco (maker of Dunhill and Lucky Strike) absorbed a number of manufacturing and distribution companies, including e-cigarette and flavored refill maker Ten Motives in 2016. Similarly, Imperial Brands (Winston and KOOL) picked up Blu Cigs in a 2014 deal with Reynolds American (also a big tobacco company, but the brand was initially started by an Australian entrepreneur in 2009). Blu makes vaping devices with flavors such as vanilla, java jolt, and pina colada.

Just ahead of Standard Diversified is Namaste Technologies, a cannabis-related tech company that sells vaporizers in more than 20 countries. The company acquired URT1 Limited, an online smoke shop that sells bongs and pipes, in 2016.

So far, negative headlines around vaping have done little to dissuade investment and expansion within the industry. Though coverage of health risks, identified as a particularly harmful narrative for the industry, have increased with the recent news of deaths and hospitalizations tied to vaping, it remains to be seen if this will negatively impact industry growth in the longer term.

Potentially more concerning are discussions around regulation—particularly around flavored products, which have been a leading focus area for investors, new companies, and big tobacco acquisitions. Cannabis-related vaping products may also face similar bans or regulations, given potential ties between these products and the mysterious lung disease affecting users around the country. Like flavored e-juice retailers and manufacturers, cannabis vape products have been a huge growth area in the industry.

If you’d like to learn more about how Quid can help you get smarter on an industry, reach out to us at hi@quid.com.