In the month since the presidential election, fake news has dominated the actual news cycle, prompting everything from an alien takeover of Google searches to a showdown with real guns.

If you looked closely, you’d see that most stories about the fake news controversy were actually about Facebook’s role in it.

To understand the stakeholders and events shaping the issue, we turned to the Quid news dataset. That’s right, we analyzed the news coverage about fake news. (How meta.)

Mark Zuckerberg is the most mentioned non-politician in the fake news debate.

Quid software can look at news data in a variety of ways. In the visual below, each node represents a person mentioned in the news about fake news, published by U.S-based media within the past year. Larger nodes indicate more mentions.

While most people shown here are the subjects of fake news, a few individuals stick out as perpetrators. In the top right quadrant, Zuckerberg is the only person who is largely being blamed for perpetuating fake stories. 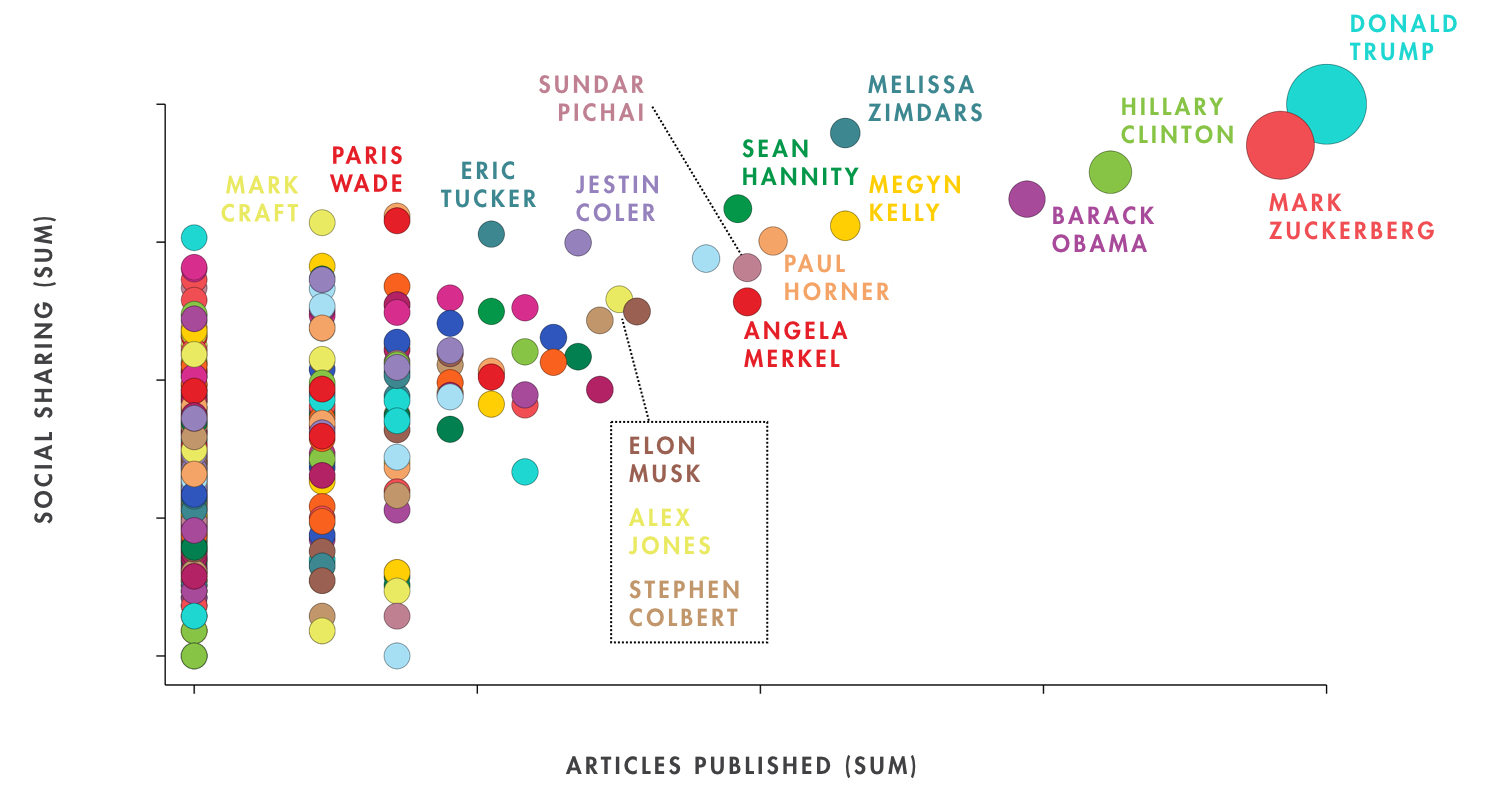 News articles about fake news, aggregated by most mentioned person, sized by article count and plotted by social sharing metrics.

Facebook is dragged into almost every sub-narrative about fake news.

Seventy-nine percent of the articles mention Facebook, the most-mentioned company within the Quid network, followed by Google at 41% and Twitter at 30%. The network is also predominantly negative, with only 5% of the network showing positive sentiment.

In the network visual below, each node represents one article, and each colored cluster represents a sub-narrative within the larger topic of fake news. We’ve shown the largest 23 subtopics, everything from a study proving that young people are more vulnerable to believing fake news to claims that fake news on Facebook swayed the election.

7 of the top 24 narratives focus solely on Facebook controversies.

The timeline of events related to Facebook plays out like a chain of falling dominos. In late August, when Facebook replaced its human news editors with algorithms, the company got flack for accidentally promoting a fake Megyn Kelly story. After the election, there was a second wave of backlash blaming Facebook for swaying the vote, soon followed by Zuckerberg refuting those claims, calling it ‘crazy’ to think Facebook had that amount of clout.

"Personally I think the idea that fake news on Facebook...influenced the election in any way is a pretty crazy idea."

As news coverage on the topic crescendoed, both Google and Facebook announced changes to their advertising policies, taking aim at fake news sites.. Then, Buzzfeed got word of a ‘renegade task force’ of Facebook employees who disagreed with Zuckerberg’s ducking responsibility, and Gizmodo found that pre-election attempts to fix the fake news problem were shut down for fear of conservative backlash. Finally, without apologizing, Zuckerberg announced that Facebook would take action to mitigate fake news.

How do we really solve the fake news problem?

Within the network, we found a few articles proposing solutions. Quartz suggests improving technology design, while a Business Insider opinion piece calls for more investment in research first. Some have taken fake news-hunting into their own hands, from this group of students at a Princeton hackathon to Internet crowdsourcers organizing on open Google docs. There’s even a Chrome extension available to download.

Whatever the solutions, more information will help if managed right. Tools like Quid are essential for sorting through massive amounts of content, helping us to see the full picture instead of finding ourselves stuck in a filter bubble. With more clarity-- and more sophisticated tools --we are more likely to find informed insights in all the noise.