With access to high-speed internet making tremendous leaps over the last 20 years, it’s only natural that we’d hit an inflection point in the way we consume movies and television shows.

From 1998 to 2008, access to broadband internet in the United States increased nearly 9700%, which meant more and more people would have the ability to access rich media on the internet - but who understood the shifting market landscape best and took advantage of the opportunity first? 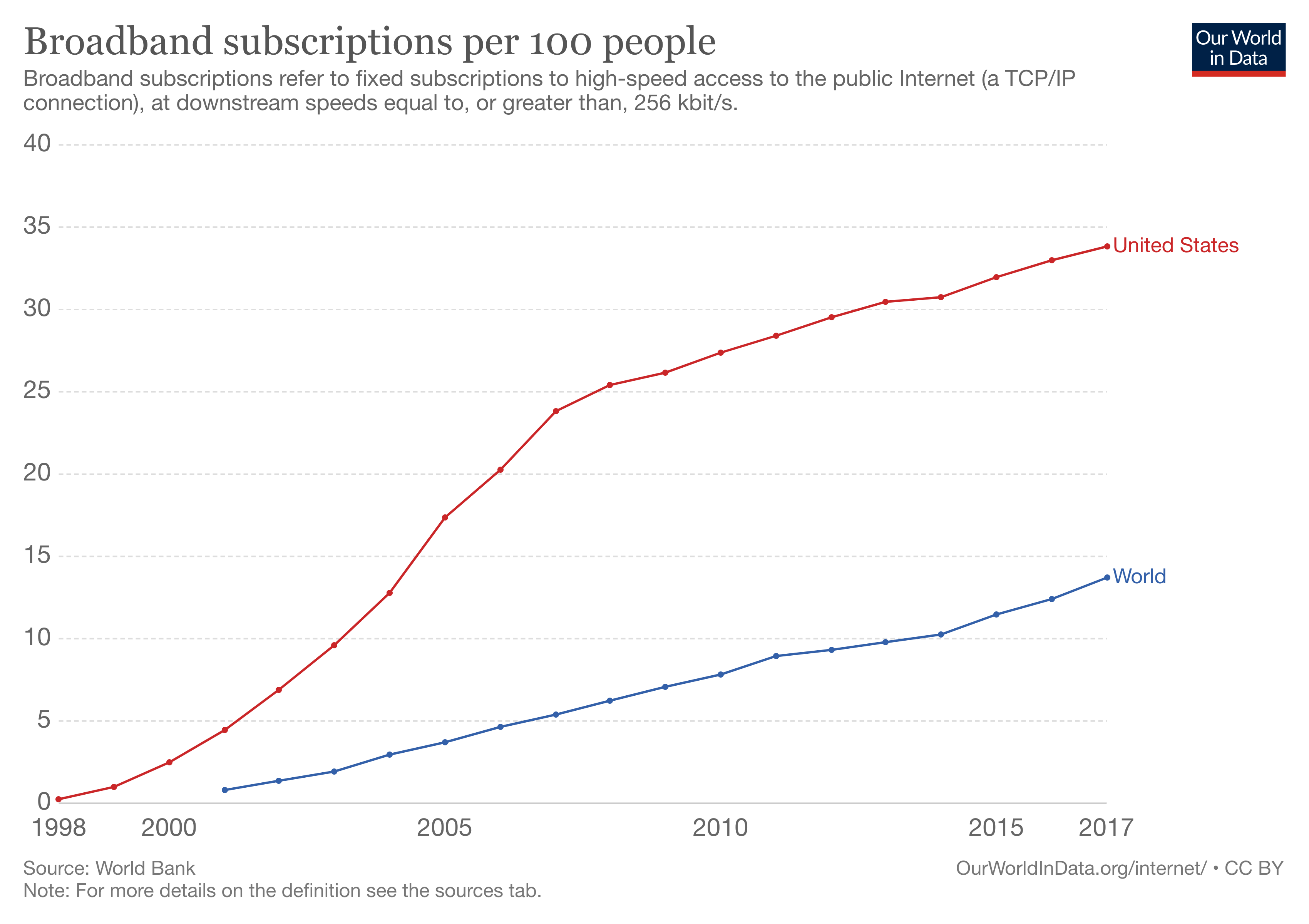 Running nearly parallel to this timeline was Netflix’s shift from a DVD rental service (which had been its business model since its inception in 1997), to launching an online streaming platform at the beginning of 2007 - roughly one year before Hulu launched its service in 2008.

To date, Netflix and Hulu are at the top of the charts when it comes to the number of subscribers, and were only recently joined by Disney+ (the latter two of which fall under The Walt Disney Company umbrella), but what has recent media coverage looked like for streaming services, and what did our market intelligence platform help uncover when analyzing services and topics that are being included in conversation?

What Drove Media Coverage in the Past 2 Years?

When running a simple query for coverage of streaming TV platforms over the last 2 years, conversations regarding shows that were launching on these platforms drove the bulk of the conversation, and was the most consistently talked about topic over the time frame we analyzed. This goes hand in hand with why streaming services are spending significantly in original content, with tens of billions being invested in licensing or creating shows and movies that are exclusive to their platforms.

The one thing that did break through and disrupt the constant stream of original content coverage was Apple’s announcement and launch of Apple TV Plus, which drew significant spikes not just in media interest..

...but also in the amount of social engagement compared to the other clusters, thanks to a number of articles referencing both the launch of Apple TV Plus, and pricing on their new iPhones during their annual fall event:

A look at the network also shows that Apple’s announcement was closely linked to conversations regarding Netflix and Roku’s stock due to the Apple TV’s name being attached to both the hardware and subscription service. 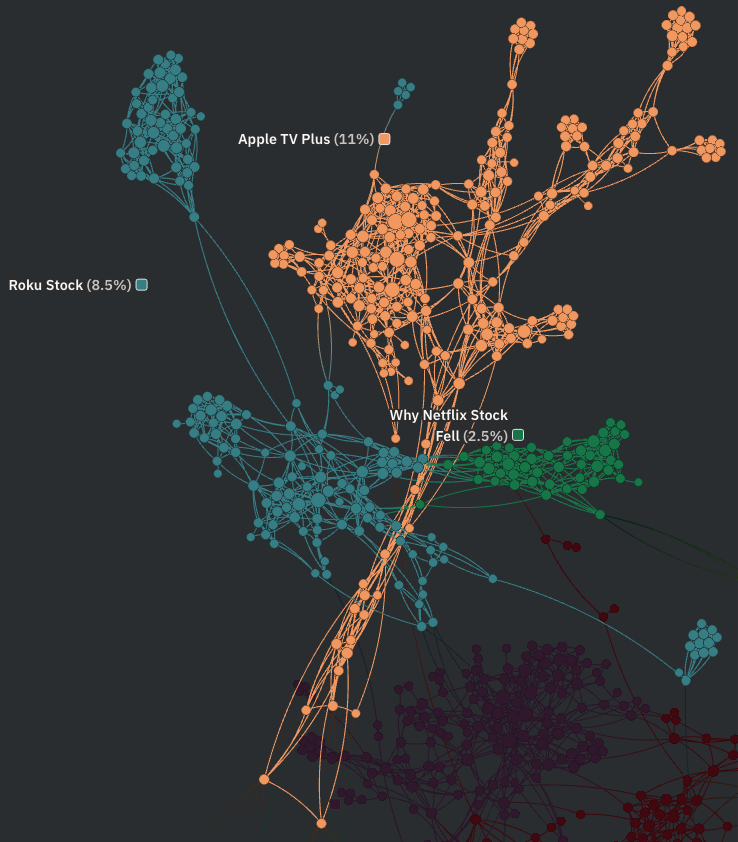 But as we can see when looking back through two years of data, it’s Netflix that has demonstrated the most consistency among the top companies in the conversation, and they did it through creating and investing heavily in original content:

What About Live TV Specifically?

After more than 10-years of going head-to-head, the two giants of streaming video have evolved significantly with Netflix focusing on creating original content, and Hulu going back to its network TV roots by entering the live TV race, and our analysis gives us insights into this recent shift. 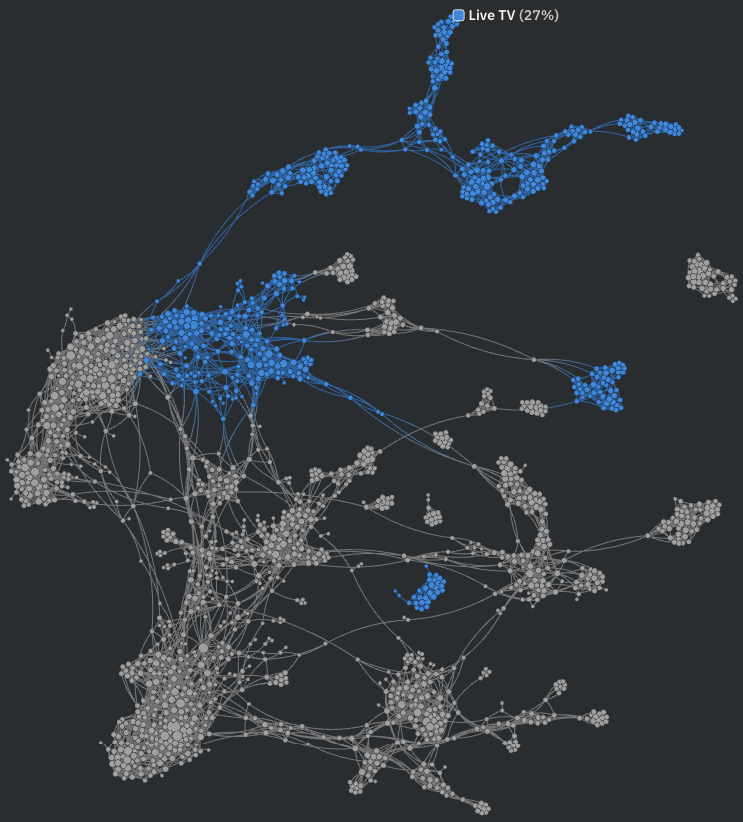 A deeper dive into analyzing more than 2,100 stories published over the course of the last 2 years on live TV streaming services shows that the service with the largest share of voice was not surprisingly Hulu (of which Disney is a Majority shareholder) at 42%, and it’s no surprise that they’re now the largest live streaming service, with more than 3.4 million paid subscribers at the close of 2019 Q4.

When looking at the last 2 years, the top 3’s share of voice is even more apparent, with these services being the primary company mentioned in roughly 63% of articles about streaming TV services published every month.

In the months when the top 3 didn’t dominate media coverage, it was Fubo TV’s additions to their executive team in August of 2018, and Playstation Vue’s price hike in July 2019, two months prior to the announcement in October 2019 that the service was shutting down that stole the headlines.

What's Next for the Streaming Services Market?

Netflix and The Walt Disney Company’s properties have generated the lion’s share of media coverage, both on the original content and live TV fronts, but with product launches like Apple’s demonstrating their ability to move the needle in media coverage and social engagement, there’s room for contenders (namely established brands) to insert themselves into the conversation.

Our market intelligence platform was able to discover how these brands are maintaining their lead over the competition, and you can too, starting with a personalized demo of Quid. See how you can disrupt the conversation, or build an even larger gap over your competition by signing up today.