In recent years, the conversation around climate change has gotten louder and evolved beyond environmental circles to become part of larger business, policy and societal narratives. With such an extensive topic, it can be helpful to cut through the noise to understand which people, companies, and institutions are truly central to the conversation. These types of insights are valuable when thinking about partnerships, initiating discussions, and getting smart on a topic of interest by identifying voices with impact.

Our Key Opinion Leaders App has been designed to do just that - look across the news coverage for a particular topic to surface the most important players in the space. Enter any topic and the KOL app searches through all relevant articles from the given timeframe to pull the top people, companies, and institutions and rank them across various metrics.

Below, we’ve leveraged the KOL app to highlight the key voices within the climate change narrative. Among individuals (seen below), Donald Trump, Barack Obama, Greta Thunberg, António Guterres, and Al Gore are all highly prominent. To the right of each name, Quid also displays the number of article mentions and their Quid-generated scores for Relevance, Resonance, and Reach. 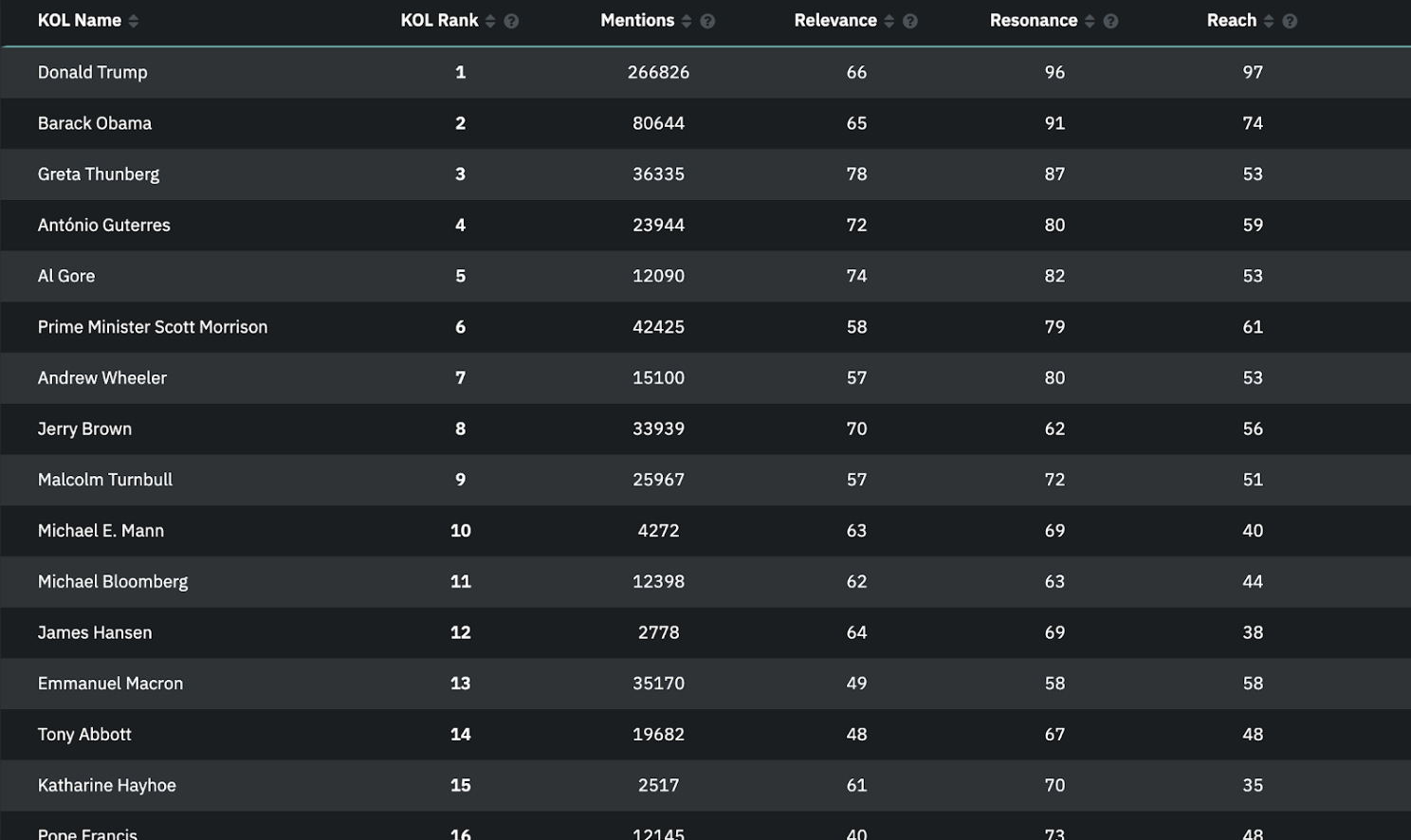 By looking through each of these metrics, we can determine that Donald Trump has the highest number of mentions, and highest score in terms of reach and resonance (determined based on source rank and social media sharing), while Greta Thunberg is the most relevant influencer (calculated on her number of mentions in the news compared to her number of mentions within articles on this specific topic), despite her lower scores in other categories. What this means is that whenever Greta Thunberg is mentioned in the news, it almost always is because of climate change and her work as an activist.

The KOL app also provides important context for each influential party on the list. Clicking on Donald Trump gives us more information about his involvement in the climate change conversation, including representative article headlines, a brief description on who he is, and other entities (companies and people) that typically show up in the same articles. We can see from the graphic below that he is frequently mentioned alongside oil & gas companies and other politicians.

In the traction view, Quid automatically generates several important callouts that we can leverage. To start, EPA head Andrew Wheeler has the highest average social engagement with a pretty high publication count, largely for recent rollbacks of Obama-era climate policies and very public criticisms of the media. In contrast, Lesley Stahl also has high average social engagement—the second most in the group—but appears in a much smaller pool of articles on the subject. Going back to the Table view, we can see that this hidden influencer is an American television journalist that frequently covers the subject.

In addition to individuals, the KOL app also looks at the relevance, resonance, and reach of companies and organizations. On climate change, five of the top 10 companies mentioned are oil companies (Exxon, Chevron, Royal Dutch Shell, BP, Conocophillips). Digging in further, we see one story driving much of the coverage: the filing and eventual dismissal of a lawsuit by the State of Rhode Island against a number of oil firms in the summer of 2018.

Learn how your company can get smarter, faster with Quid Apps by reaching out to hi@quid.com, or visit home.quid.com with your Quid login to get started today.