With more than a year to go before the next U.S. presidential election, prominent narratives are already emerging in the media around the candidates, their policy stances, and popular talking points. As part of the fourth installment of their Election Index, Epsilon Theory used Quid to look at the volume of media coverage around the 2020 elections to understand the issues driving public debate, the cohesiveness of candidate messaging, and the attention received. 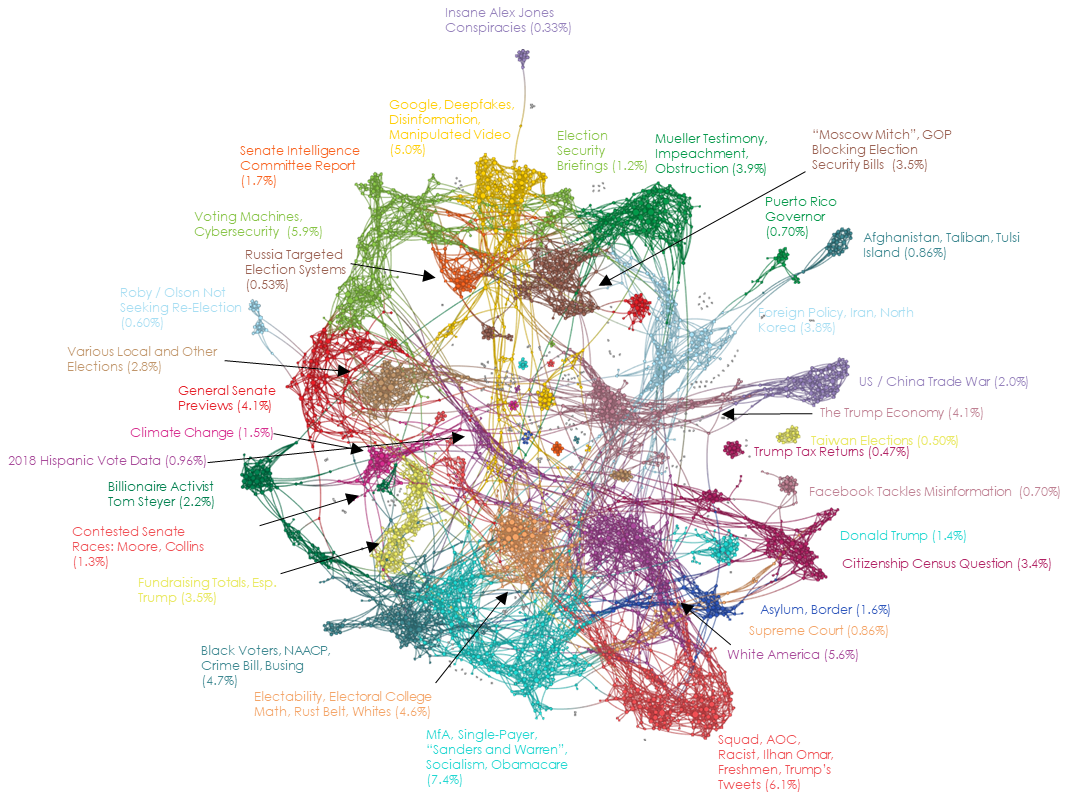 A few key takeaways from their analysis:

Messaging around the election is acutely focused on race, gender, and identity

From asylum seekers to black voters, white America, and female candidates, the media narrative around the 2020 election is focused on identity politics. Nearly every highly connected cluster in the network above contains one or more such qualifiers. Surprisingly, Donald Trump has very low visibility and is quite isolated from the rest of the discussion.

Coverage around Kamala Harris and Joe Biden has been most consistent

The media narrative around Kamala Harris has been the most cohesive following the last Democratic debate. However, the language used to discuss her candidacy has been quite negative, particularly around issues like her background as an attorney and her tense exchanges with Joe Biden on the stage.

Joe Biden has also received consistent coverage, but mostly from outlets questioning whether he has the ability to overcome a less than progressive background to actually win the election.

Bernie Sanders and Elizabeth Warren have received the most positive coverage

While Bernie Sanders has attracted positive coverage since 2019, Elizabeth Warren only recently saw a boost this past month. Some of this might be due to an emphasis on healthcare in general policy discussion.

To contrast, negative coverage continues to plague Tulsi Gabbard and Joe Biden. Both have placed in the bottom of the group, sentiment-wise, since January.

Kamala Harris and Bernie Sanders are currently the two most visible candidates, with Harris receiving a boost in July

Currently the most widely coverage candidate, Kamala Harris has recently jumped into the top slot for all the wrong reasons. Following her exchange with Joe Biden on the last debate stage, articles have focused on her hypocrisy given her background in law enforcement and expressed concerns about her electability.

Meanwhile, Beto O’Rourke has all but faded away from the central media narratives around race, gender, and identity. He previously held the second highest slot and now sits in last place.

Click here to read Epsilon Theory’s full analysis and be sure to follow their Election Index for more outstanding coverage of the evolving media narrative. If you’d like to learn more about how Quid can get you up to speed on any large media topic, reach out at hi@quid.com.

Examining the News Quid reveals dueling narratives around confrontation at Indigenous People’s March
Quid Staff
The budget deficit that no one is talking about
Ben Hunt, Salient Partners
From our Clients The Narrative Giveth and The Narrative Taketh Away: An Epsilon Theory Blog
Quid Staff