Consumers—particularly Millennials—are increasingly on the lookout for companies and brands that make environmental stewardship a priority. So, which brands have had the most success in communicating their environmental and sustainability initiatives? To answer this question, Quid analyzed nearly 2,500 articles that mentioned specific brands with keywords such as “sustainability,” “environment,” “reusable plastics,” and “climate change” since 2017.

Food and beverage brands most visible on sustainability coverage

Quid mapped each article by topic to provide a bird’s eye view of major themes across the entire set of articles. Seen below, food and beverage brands (in blue) capture nearly a third of all media coverage on sustainability during our two-year period. Announcements of plans by companies like Starbucks and McDonald’s to remove plastic straws from their stores and similar efforts by big grocers to transition away from plastic bags helped to attract attention.

Although products like electric cars have a direct connection to reducing carbon emissions, they surprisingly received only a small portion of the media coverage around sustainability. Only 4.3% of articles covered topics around the Industrials and Automotive industries. 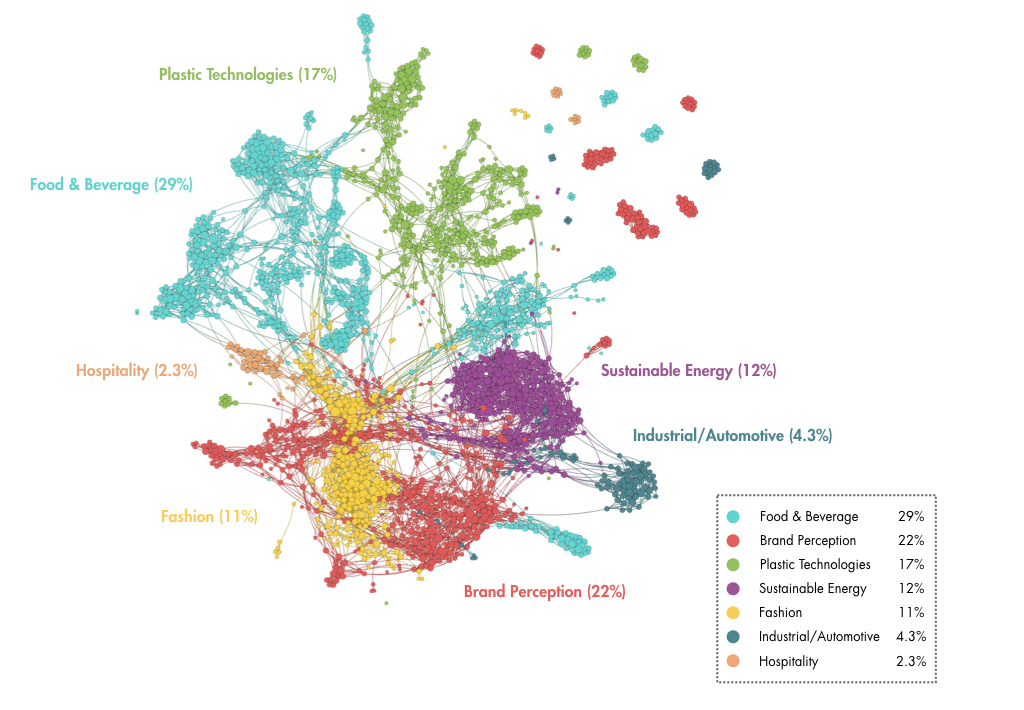 From the Quid timeline view, we can see that the volume of coverage around brands and sustainability has been on the rise over the last two years. Heineken drew some early attention by releasing a viral ad that targeted climate change deniers in 2017. By January 2018, announcements around a number of sustainability initiatives, including renewable packaging solutions from major companies like Budweiser, Danone, and Unilever, drove higher coverage around these issues.

A steady stream of announcements around plastic reduction kept the topic in the news in 2018. In July, Starbucks released plans to ditch all plastic straws by 2020. A month later, Kroger announced that it would discontinue single-use plastic bags by 2025. Later in the year, a number of major CPG brands, including Johnson & Johnson signed the New Plastics Economy Global Commitment for sustainable packaging.

In early 2019, Samsung became one of the first electronics companies to announce plans to eliminate plastic packaging for their products, while British supermarket chain Waitrose joined similar efforts to increase the use of reusable packaging for take home products like meat, fish, and poultry. 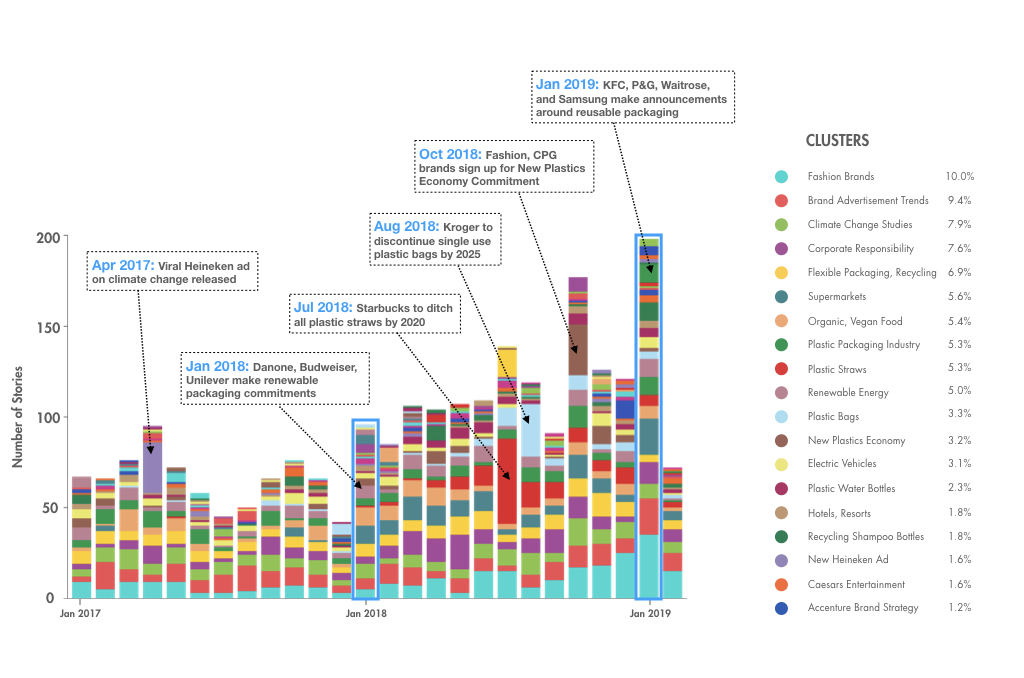 Looking at highly shared content can help provide signal on the themes that are gaining traction with the public. Loop, a zero-waste platform from U.S.-based recycling company TerraCycle generated more social engagement (via likes, comments, and shares) than any other during the two-year period. Backed by a coalition of giant consumer product companies, including Unilever, Procter & Gamble, and PepsiCo, the platform utilizes a deposit system to incentivize customers to return empty containers from products like Tide and Haagen-Dazs for re-use.

Two other news events that generated high levels of social engagement include plans from toy company LEGO to sell sustainable, plant-based blocks, and an announcement that cereal brand Cheerios will give away free wildflower seeds to help boost ailing bee populations. 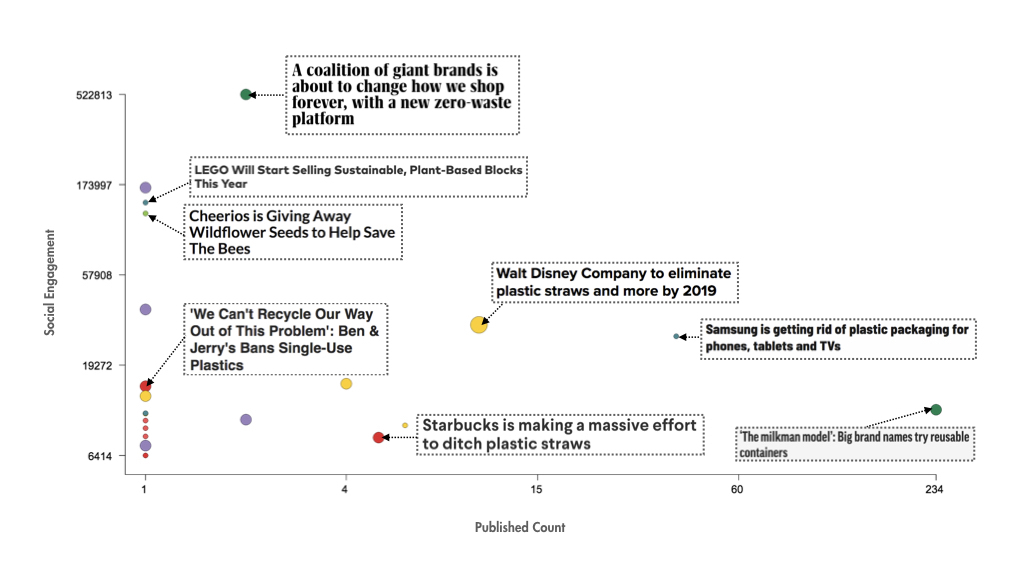 The good, the bad, and the innovative: Unilever, PepsiCo, and fashion brands lead on visibility

When looking at visibility by company or brand, Unilever leads both in terms of the number of articles published on the company and social engagement around those articles. Not only they are the major collaborators on the Loop program mentioned above, Unilever also reaps favorable coverage for its plans to convert to recyclable packaging by 2025. The decision largely comes from internal research: in 2017, the company found that a third of its customers now seek to buy products deemed socially- or environmentally-conscious. In fact, Unilever’s Sustainable Living brands saw 30% faster growth compared to the rest of the company’s products.

PepsiCo is also highly visible, however, the beverages company saw lower rates of positive coverage compared to other large players in the media narrative. Both PepsiCo and Coca-Cola received a lot of criticism for their roles as two of the world’s worst plastic polluters. Research found that in an audit of over 187,000 pieces of plastic trash, Coca-Coca and Pepsi products were most prevalent.

Beyond giant food and beverage companies like Unilever and Pepsi, Quid found that fashion brands’ investment in sustainable fabrics generated a lot of interest online, even if they didn’t receive as much mention in the media. H&M, Adidas, and Nike all received high social engagement for innovations in materials, including Nike’s Flyleather technology that uses recyclable materials for lower carbon emissions and water use. 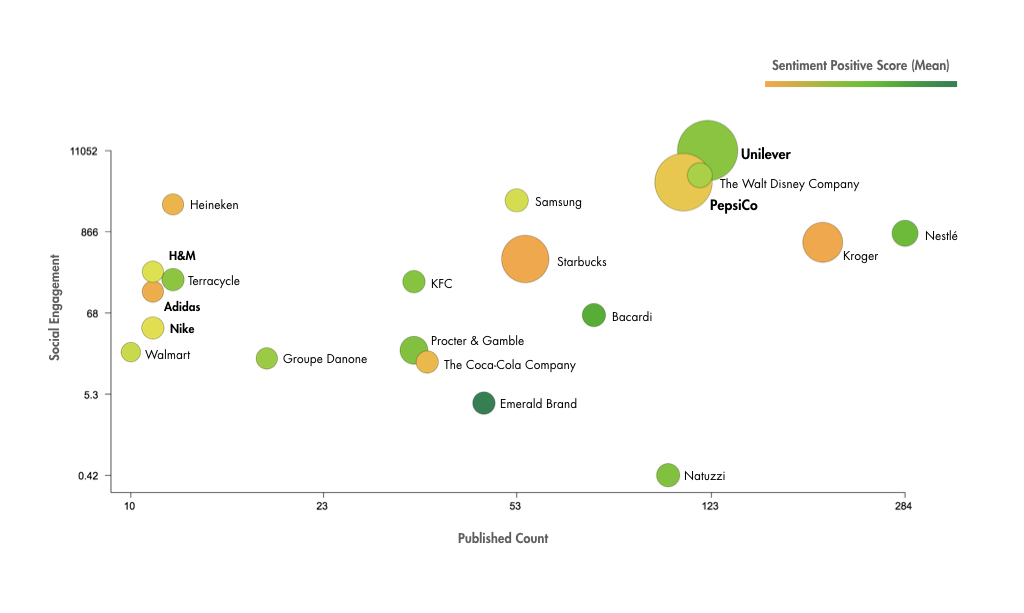 Very quickly, brands can get a sense of how they fit into the public narrative around any issue or topic, with the ability to go deeper into the data with Quid. Want to see if your brand positioning strategy is working? Reach out at hi@quid.com or visit our website for more information.

Examining the News What is the future of sustainable packaging?
Quid Staff
How To Our Top Blogs from 2019
Quid Staff
Tech Trends European "Techlash" is coming, according to new Atomico report
Quid Staff