No longer just a food item for a niche market, plant-based meat has become a global trend. Menu items like meatless burgers and plant-based chicken are so popular that industry heavyweight Impossible Foods has been experiencing short term ramp-up challenges and Beyond Meat debuted as the first vegan burger maker on the New York Stock Exchange in May 2019. Another sign that it’s gone mainstream? Fast food giants such as Burger King and KFC have both embraced the trend by launching plant-based menu options.

With all the hype surrounding the fledgling industry, we turned to Quid Apps to better understand the competitive landscape and top media narratives tied to fast food brands who have explored plant-based menus: Burger King, McDonald’s, KFC, Del Taco, and Little Caesars.

Across all five restaurants, Burger King had the highest share of voice for articles on plant-based food options, followed by Del Taco and KFC

From nearly 3,000 articles on plant-based protein over the past year, Burger King leads as the fast food chain with the most mentions and greatest brand visibility. The company captured more than a third of all coverage related to meatless menu items — a remarkable 1066% increase compared to the previous year — due to the high publicity it received for testing and launching a plant-based Whopper.

Del Taco also captured more than a quarter of all coverage for its introduction of Beyond Meat burritos and tacos, followed by KFC for its meatless chicken patty. McDonald’s, who has taken a comparatively cautious approach, had the lowest share of voice (5%). A meatless burger, dubbed the “McVegan,” had a limited release in Europe late last year, but was closer to a typical veggie burger (made from potatoes and peas) than one made from beef. Since then, McDonald’s has released the “Big Vegan TS,” made with Nestle's plant-based Incredible patty,  in Germany.

Impossible Whopper, Impossible Sausage, and the “Imposter Burger” lead as top storylines for the past year 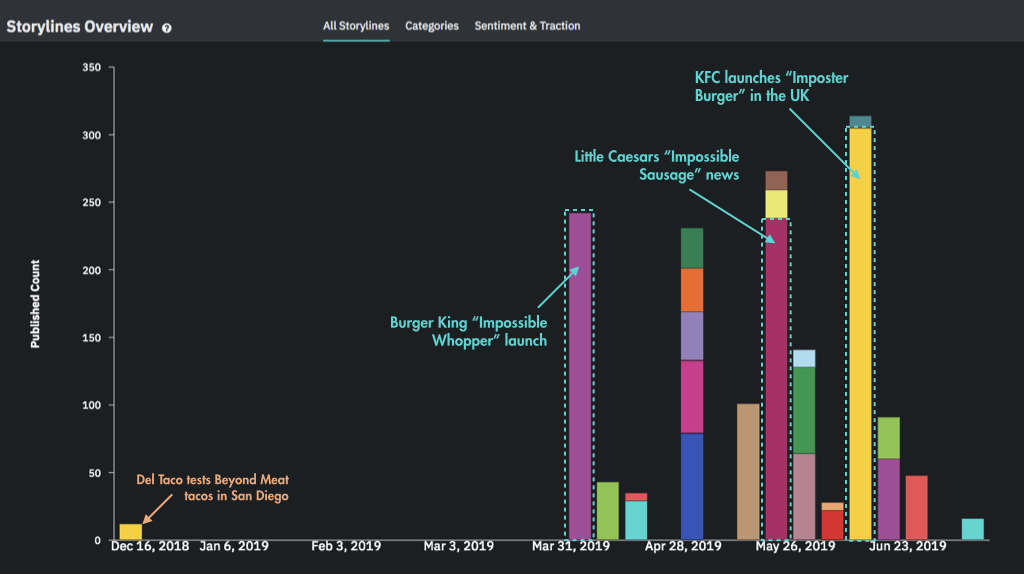 Top storylines for the year include news of Burger King’s meatless patty launch (in purple), Little Caesars’ plans for meatless sausage (in magenta), and KFC’s “Imposter Burger” (in yellow)

Seen above, the media paid little interest in the plant-based menu options offered at fast food restaurants until March 31st of this year, when news broke that Burger King had been testing a vegetarian Whopper with Impossible Foods. Less than a month later, the company announced plans to launch the meatless Whopper across the US market later that year. Coverage of another Impossible Foods partnership — this time with Little Caesars — also drew coverage in late May, with news that the pizza chain planned to offer meatless sausage in some locations.

Another major spike occurred when KFC announced plans for a limited launch of a meatless “chicken” burger in early June. Billed as the “Imposter Burger,” the patty is made from Quorn, a popular meat alternative, and is currently available in the UK.

No coverage of Burger King prior to Impossible Whopper 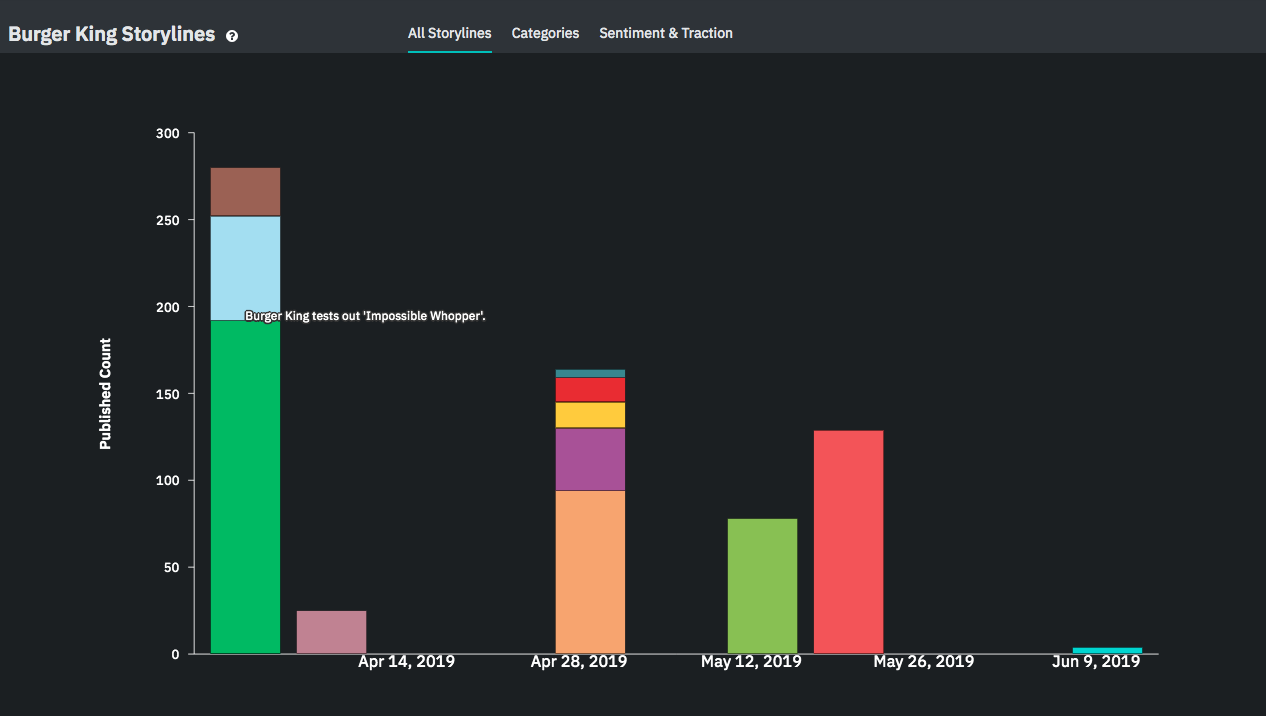 Though news of Burger King’s Impossible Whopper dominated coverage of plant-based protein menu options over the past year (in green), the company earned no other coverage prior to May 31st.

From Burger King’s storylines, we learned that the company had not been present in the plant-based protein narrative prior to news of its partnership with Impossible Foods on March 31st. That being said, the event drew widespread attention and preceded major announcements by all other competitors in our dataset. The only exception was a relatively quiet story from late last year that Del Taco had been testing plant-based menu options on the San Diego market (see previous chart, in yellow). 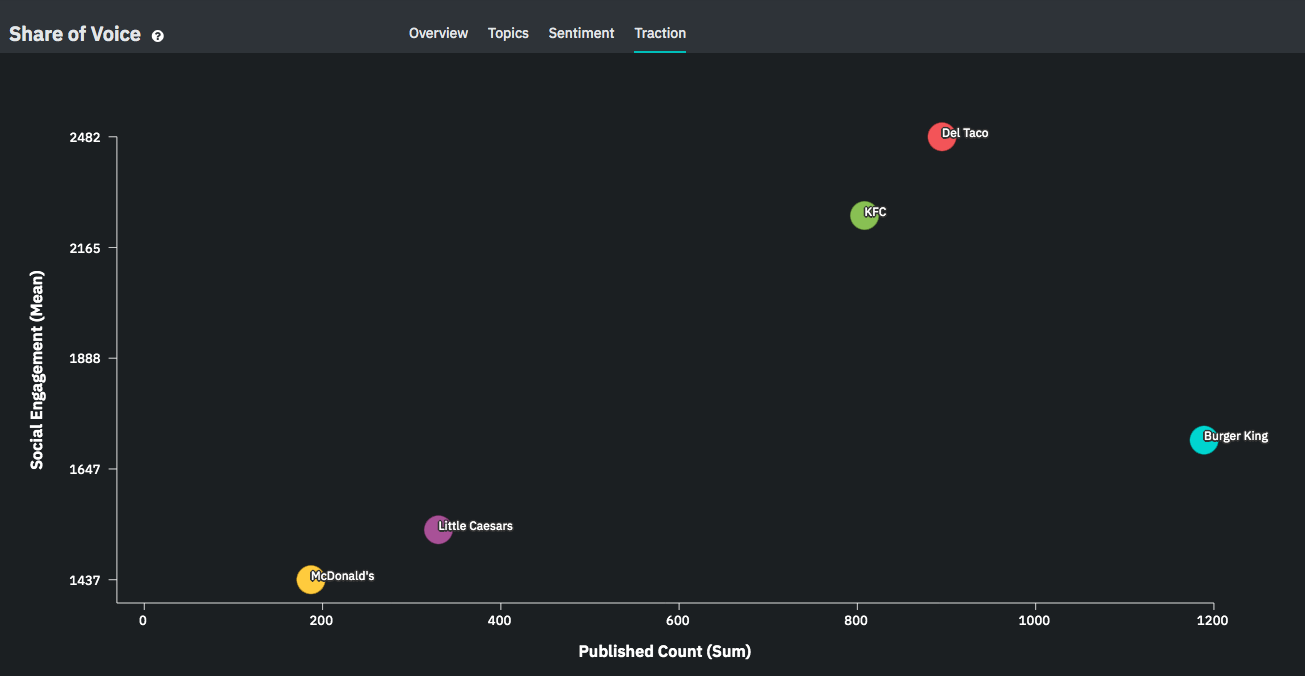 Despite high coverage rates in the media, Burger King drew less interest online than second and third placed Del Taco and KFC. The burger chain had a mean rate of 1,707 shares per article for its Impossible Whopper, compared to 2,482 for Del Taco’s Beyond Taco and 2,252 for KFC’s plant-based chicken burger. And with less than a third and a sixth of the coverage of Burger King, Little Caesars and McDonald’s captured similar rates of social interest (1,528 and 1,437 shares per article, respectively).

Many fast food chains have rushed to adopt plant-based protein options on their menus, with Burger King leading the way in terms of capturing media coverage. But with industry players like McDonald’s, Subway, and Wendy’s all rumored to be considering meat alternatives in the near future, this landscape is likely to change.

Want to learn more about competitors in your industry? Reach out to hi@quid.com or visit our website to learn more.