Regardless of whom you wanted to win the presidential election, it is now abundantly clear that numbers failed us all over the past six months. The image below captures the point perfectly.

Numbers are, of course, important, but it’s context that matters most. And it’s language that is able to add that crucial context. Language better communicates the nuances and allows for a fuller picture of what’s really going on. It’s far too easy to take comfort (or panic) in looking at a set of numbers or blue and red lines heading up or down. But understanding at scale what was actually being said would have given us the alternate perspectives that often seemed lacking.

We also were failed by the filter bubble that is much of the Internet. It’s clear from the shock so many experienced last night that a majority of Americans did not see this result coming (on either the Democrat or the Republican sides). Journalists largely appeared to be reading each other and building off each other in a giant echo chamber that broadcast the idea of one, and only one, potential outcome.

But there were signals in the noise (though not, ironically, from Nate Silver).

If you look in Quid at everything written about who would win the election, you actually see a few areas that predict a win for Trump. But they are on the outskirts of the network and not well connected to the primary narrative, which is of Clinton cruising to victory. 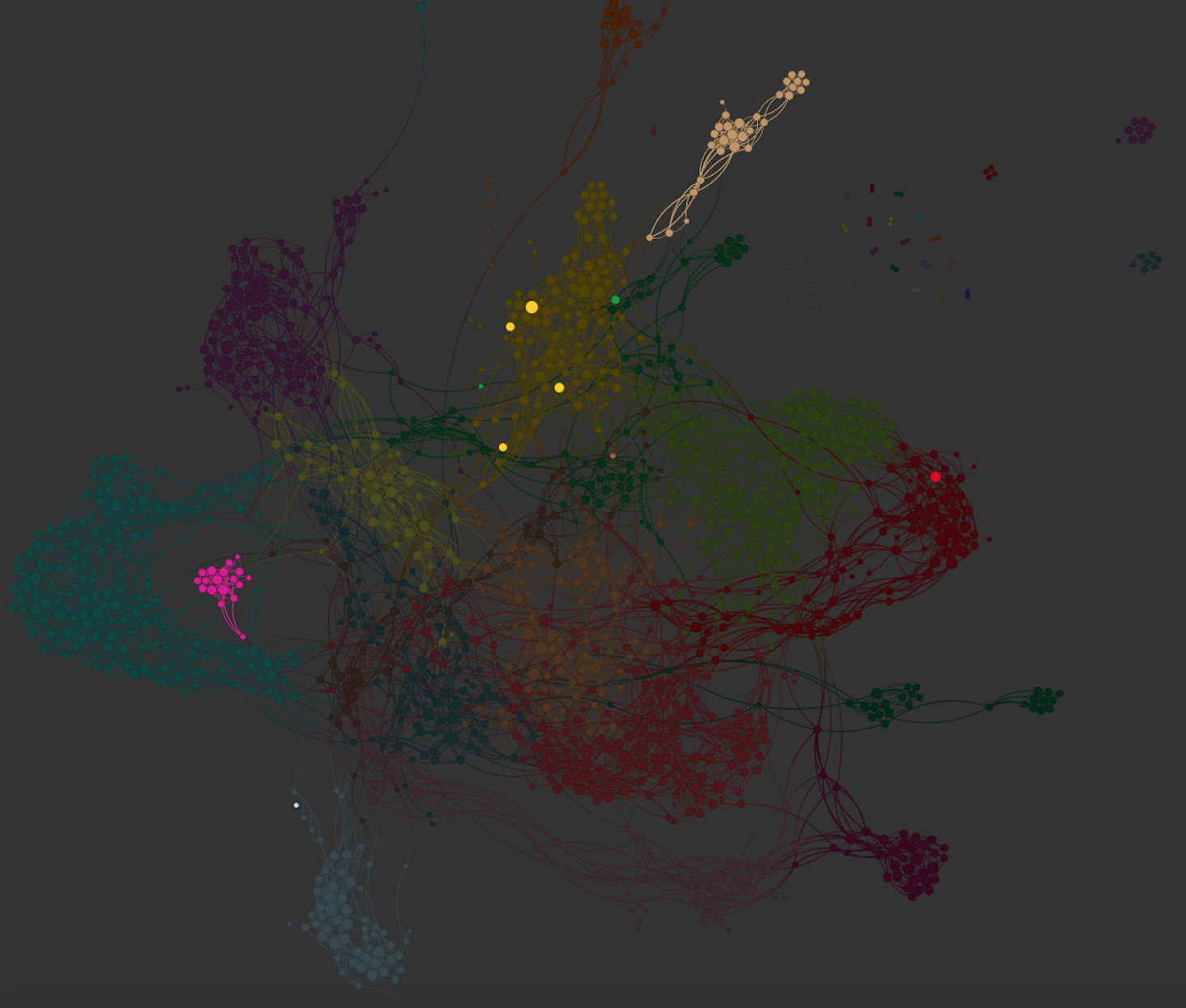 A Quid network showing 1,805 news stories about who would win the election, with predictions of a Trump win highlighted. 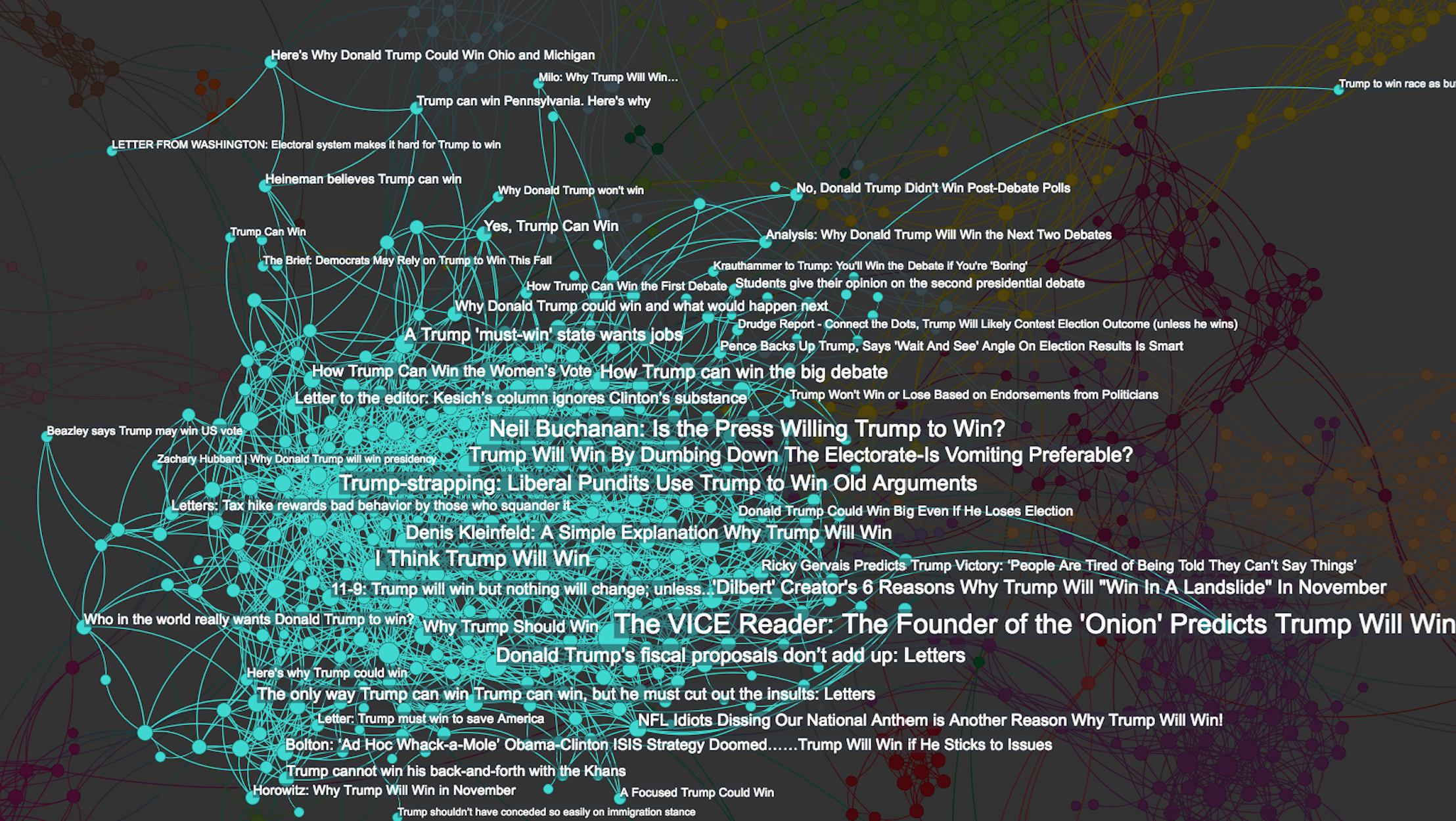 But when looking specifically at a network of content predicting a Trump win (up until the day before the election), you find all sorts of people making a correct prediction.

Some, of course, are alt-right bloggers propelled as much by ideology as analysis. Others are monkeys (literally). But there are other categories as well.

Below is a map of every article and blog post predicting Trump will win written from the end of the primaries through Monday, November 7th. Quid software clusters the content by topic.

Some of the pockets that were predicting a Trump victory:

- Those who create satirical comedy seemed to get it better than most – the founder of The Onion , the creator of Dilbert , and Ricky Gervais all called it. Michael Moore actually nailed the specifics.

- Professors and analysts employed a range of different models beyond simply polls to get to an answer.

- Plenty of people warned of faulty polling on both the left and right. And there were warnings everywhere of misunderstanding just like Brexit (especially from Trump, who took to calling himself “Mr. Brexit”).

- People saw this coming based on social media – both based on simple human counts and employing AI.

- There were certainly some reporters who saw the movement shaping up.

- The S&P 500 stayed consistent in signaling the true winner.

So what do we take away from all of this? We need to use tools (like Quid) that can visualize language at scale – what’s being written and said across mainstream media, blogs, social media, Reddit pages, and town hall meetings –  so that we can seek to understand context and learn to stop relying on simple shorthand cues that fuel the horse race but offer limited meaningful insight.