There’s a good chance that you ran into White Claw during this past summer. The relatively unknown hard seltzer brand skyrocketed in popularity in 2019, leading to shortages, nationwide debates over flavors, and proclamations of a hangover-free drinking experience.

To better understand the American public’s obsession with spiked seltzer this year, Quid analyzed 1,529 news articles on the subject, as well as 7,843 tweets that either mentioned “White Claw” or tagged @WhiteClaw to see what reporters and consumers were saying about the brand. We also took a look at the 542 tweets sent by the company’s Twitter account to see if promoted content resonated with popular topics generating interest among the public.

When discussing the hard seltzer industry, the media frequently reported on consumption trends, cocktail recipes, and connections to popular culture.

Recipes for spiked seltzer-based cocktails and event announcements with hard seltzer on offer led media coverage with 12% and 11% of the narrative, respectively. The industry’s affiliation with well-liked Bachelorette contestant Tyler Cameron, a marketing and sales coordinator for Spiked Seltzer, also captured headlines and more deeply connected the product to popular culture (10%).

Topics like the White Claw shortage in America (3.6%), the announcement of Four Loko’s hard seltzer product (7.3%) and Super Bowl commercials (4.1%) generated buzz, but remained distinct, which means that coverage would spike and then fade. Top headlines for these clusters included: Don’t panic, but the country is running out of White Claw (Mashable, 9/16/19), Four Loko announces powerful hard seltzer line and livers are already crying (NBCNews, 8/14/19), and The Super Bowl ads you will remember (CNN Wire, 2/3/19) that described a commercial by Bon & Viv Spiked Seltzer as “seemingly meaningless” and “[not] particularly well done.” 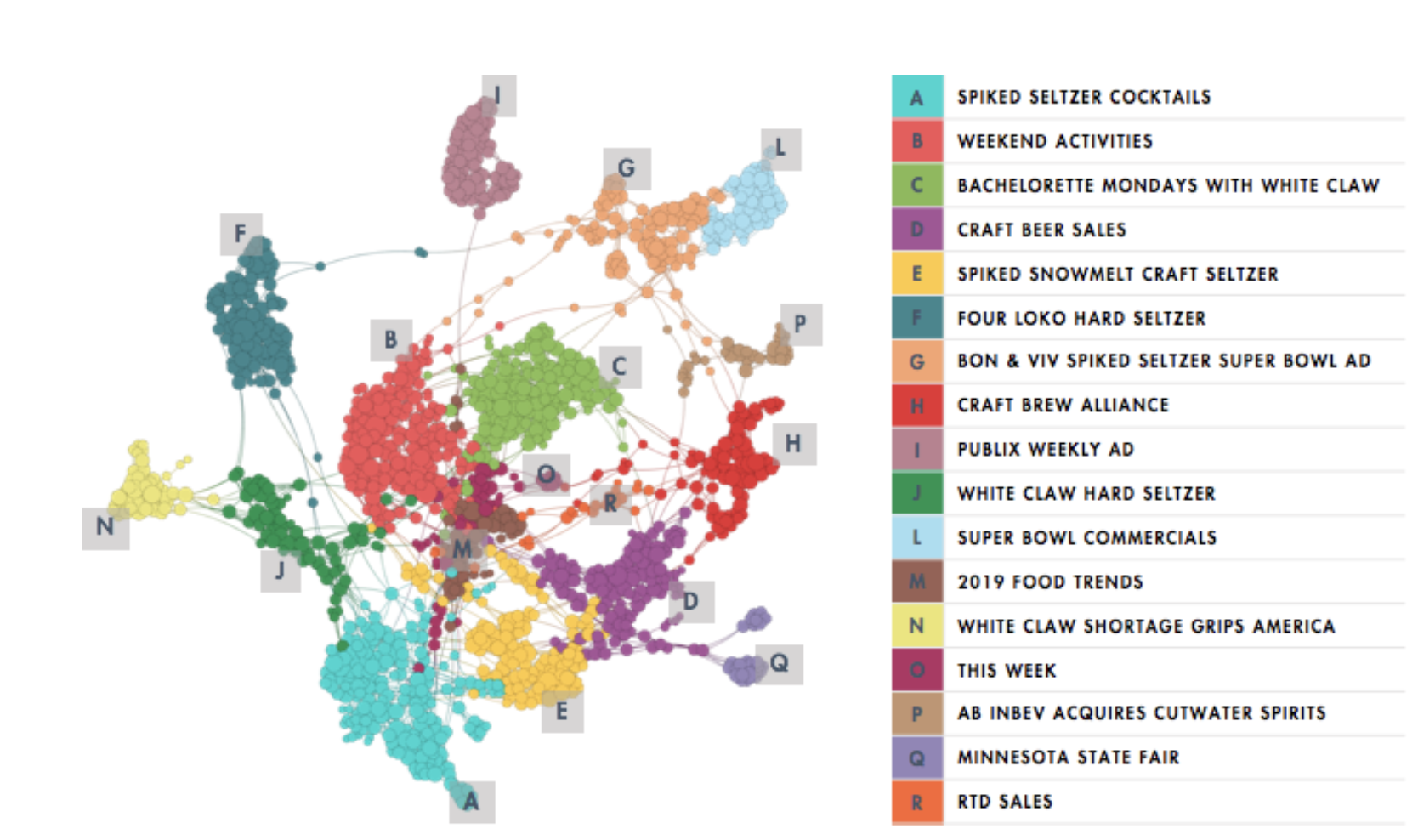 It seemed difficult for reporters to cover the hard seltzer industry without mentioning White Claw. The brand is largely synonymous with the hard seltzer industry in the United States and appeared across a wide spectrum of topic areas, including general affiliation with upcoming weekend activities, cocktail recipes, and news of a nationwide shortage. It even had an entire Quid cluster dedicated exclusively to brand coverage: Why are people obsessed with White Claw? (Life Hacker, 7/26/19), DC drinkers are shotgunning White Claw and buying the seltzer by the bucket (Eater DC, 8/16/19), It’s a White Claw summer, like it or not (Salon, 7/11/19), and How healthy (or not healthy) is White Claw? (GQ, 8/9/19).

Bon & Viv Spiked Seltzer came in second, primarily due to coverage of its Super Bowl ad. A first for spiked seltzer (or any kind of malt-flavored beverage), the Anheuser-Busch InBev brand released a 30 second commercial shot by the Oscar-nominated cinematographer for The Shape of Water that featured the logo’s two mermaids.

Bar chart showing the number of stories for each prominent brand within the narrative. Colored by cluster.

Despite a relatively late emergence during our one year period—news peaked on August 14th—coverage of new hard seltzer offerings by Four Loko, Natural Light, and PBR captured the second highest rate of social interest.

Scatterplot comparing social traction with publication counts for each cluster. Colored by cluster. 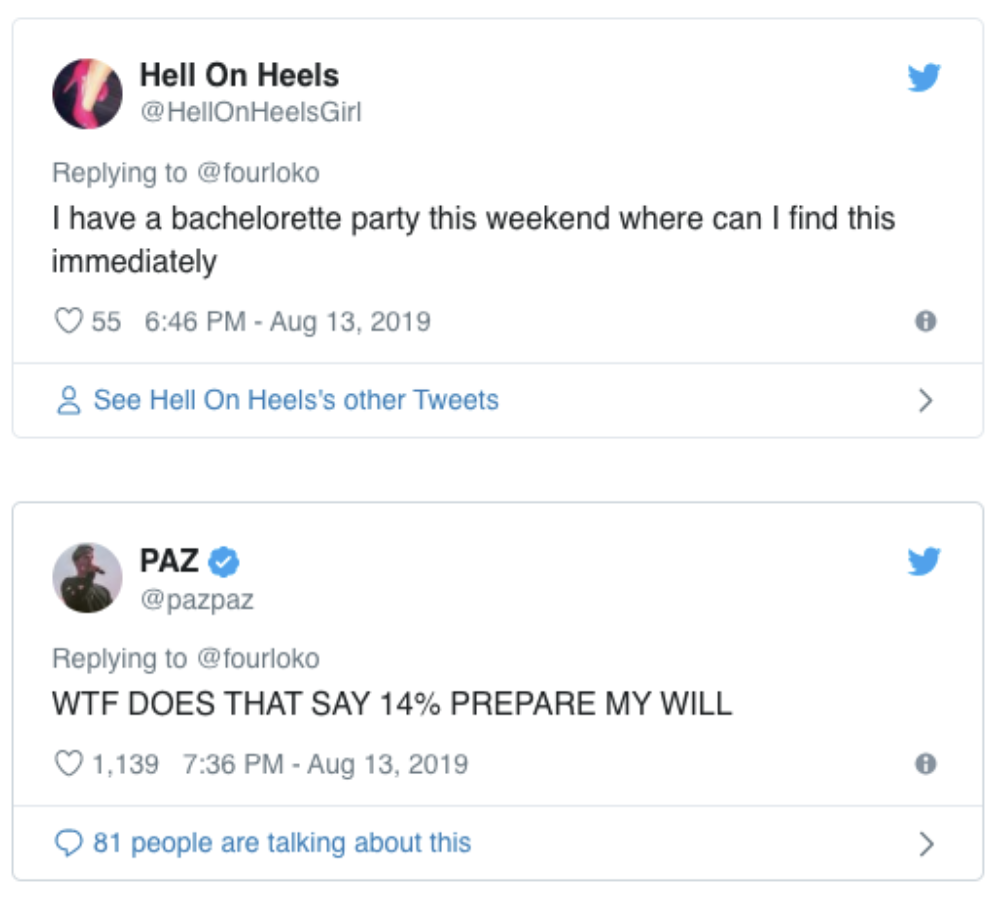 One highly engaged topic that received little to no media coverage? Hard coffee from PBR.

Aside from seasonal coverage, corporate marketing events were other large drivers of media buzz. Spikes in January and February 2019 occured due to Bon & Viv’s Super Bowl exposure, and another in August 2019 centered around product releases from new entrants.

The popularity of White Claw memes like “No laws when drinking claws” have spawned t-shirts and headlines alike (Cops want you to know: ‘There are still laws when you’re drinking claws’). Nearly 5% of all tweets referenced the phrase or its hashtag equivalent. 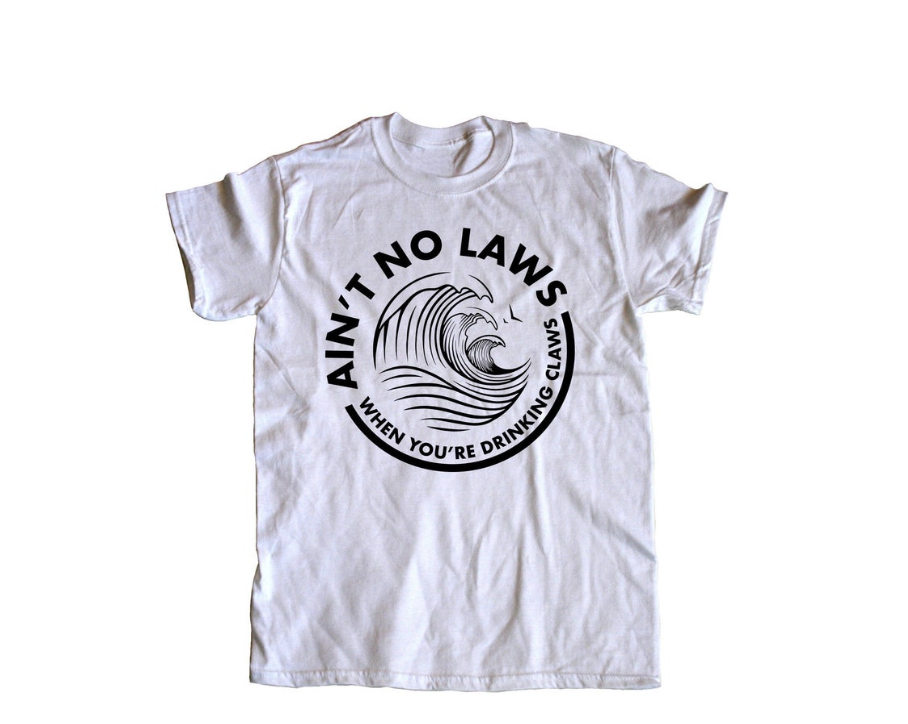 Consumers also frequently tweeted about viral activities or accounts associated with the brand, including being drunk at Disney (made popular by the account @DrunkAtDisney), “Fridays with White Claw”, and “White Claw during the day.” Sample tweets include “I invoke the @WhiteClaw white clause, you see, there are no laws when you’re drinkin’ Claws,” “IT’S A FRIDAY MIRACLE!! I’ve been blessed to find the elusive Mango @WhiteClaw,” ”Hmm, should I do a @WhiteClaw pool day tomorrow or a mimosa one?”

The largest topic areas, however, centered around potential brand selling points, including “tastes like water” (10% of all tweets), “it’s a lifestyle” (6.2%), and “hangover cure” (6.1%). 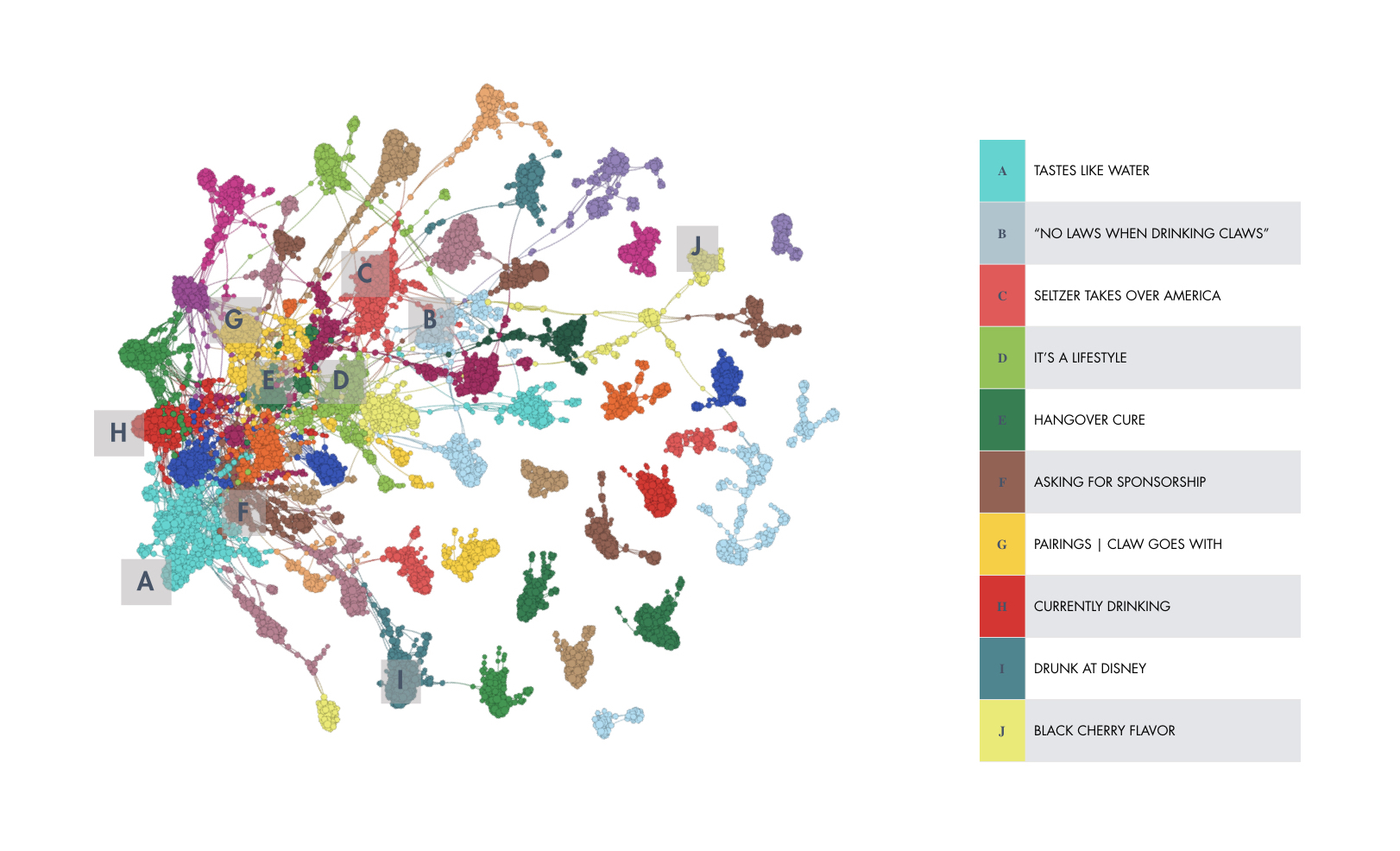 Powered by a few viral tweets, the topic “Seltzer takes over America” had the most likes from online consumers. Popular tweeters may provide opportunities for partnership.

A tweet from sports reporter Darren Rovell (@darrenrovell) that detailed the massive sales numbers for hard seltzer in the United States generated 3,257 likes - the most of any single tweet in the group. Rovell has 2.05 million followers and frequently discusses betting analytics and sports merchandise.

Crooked Media’s Ira thee Third (@ira) has also tweeted about White Claw a number of times to his 181,000 followers. Both tweets seen below ranked among the top 5 most liked tweets about White Claw from the past year. White Claw could consider buying a sponsorship spot for Keep It, his podcast on popular culture. 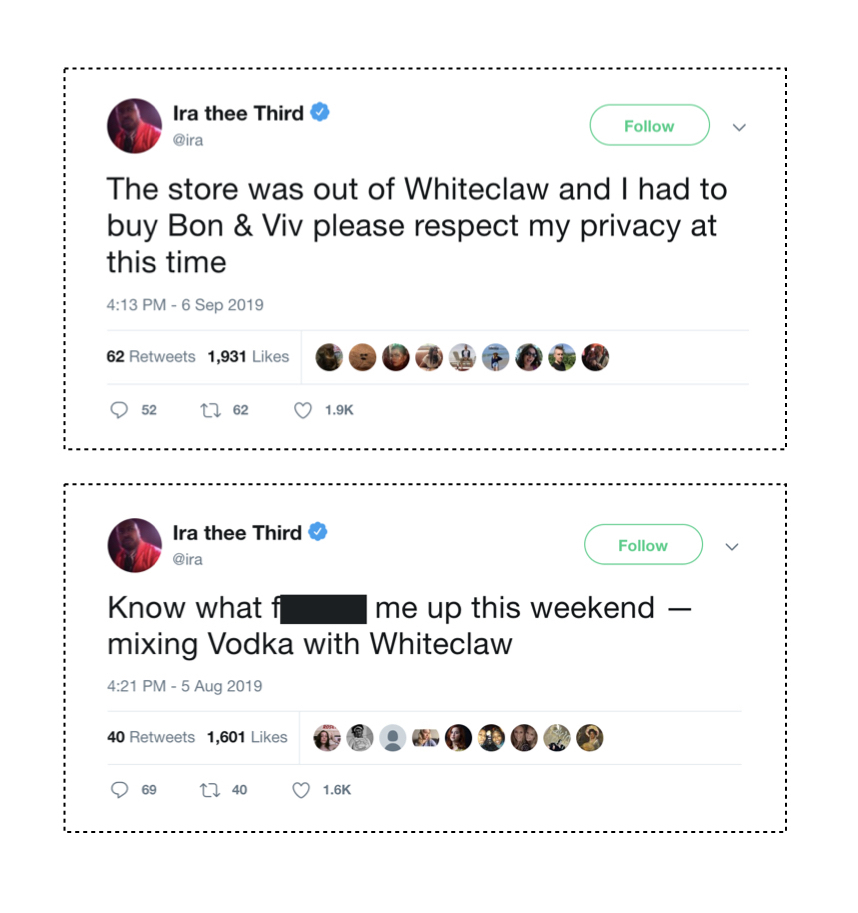 Chicago, far and away the most frequent location for Twitter activity on hard seltzer, is actually White Claw headquarters. But tweets covered a wide spectrum of topics. Meanwhile, the popular trend of drinking at Disney World, buoyed by the Twitter account @DrunkAt Disney catapulted Orlando to #4, while rising demand from Ohio State University drove Columbus to the #5 spot.

Negative comments about White Claw’s black cherry flavor indicate that some consumers do not like the taste, which presents opportunities for further analysis or product updates.

Only 28% of tweets about White Claw used negative language, compared to 68% when discussing specifically the Black Cherry flavor. Some posters said that it tasted “like medicine,” or that it was the only flavor they didn’t like. 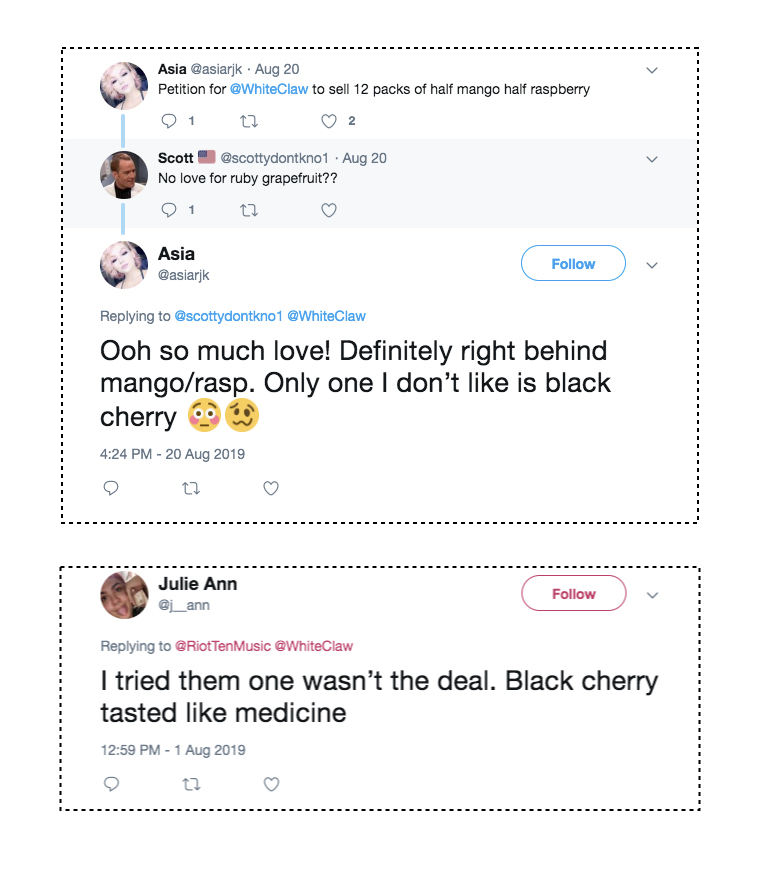 But closer inspection revealed that the flavor is quite polarizing, with some consumers fiercely defending against negative comments. 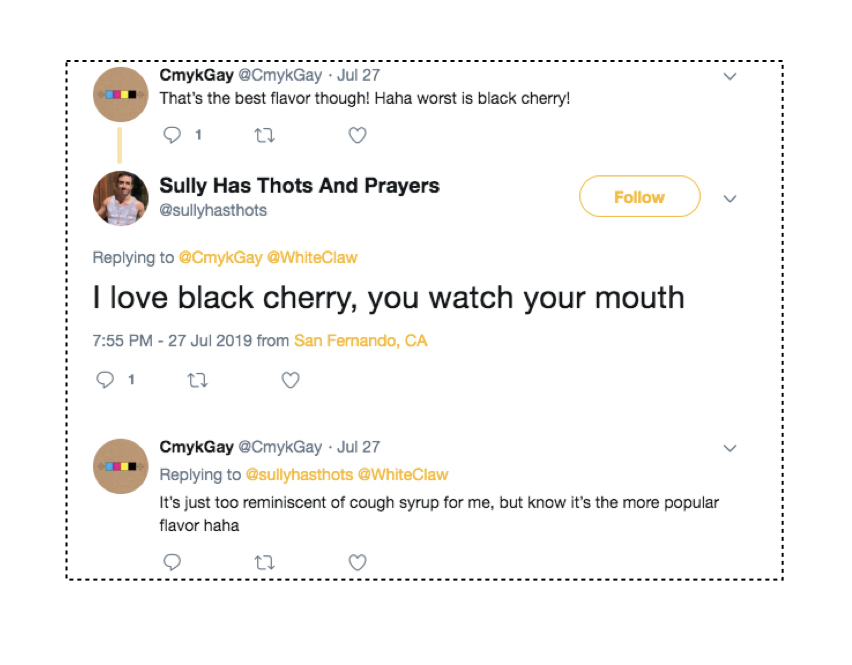 A number of consumers offered advice on packaging favorite flavors together, something that White Claw may want to consider in the future. Currently the brand only sells variety packs that feature four flavors. 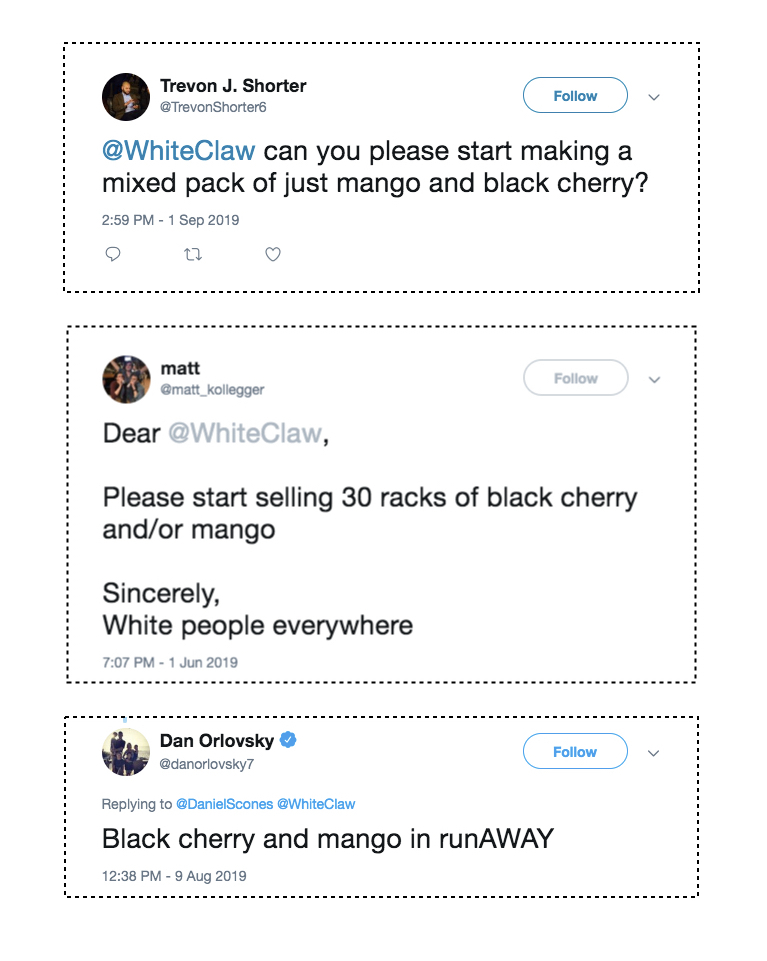 When comparing social and media buzz to messaging sent out by White Claw’s own Twitter account, Quid found opportunities to connect more deeply with consumers.

As seen below, the Twitter account @WhiteClaw generally tweets about distinct topics with no real central narrative. Tweets about the upcoming weekend or parties captured nearly 8% of all messaging, which syncs well with user and media content, but other key terms that resonated with consumers—healthier, hangover cure, water—were absent from the brand’s content. 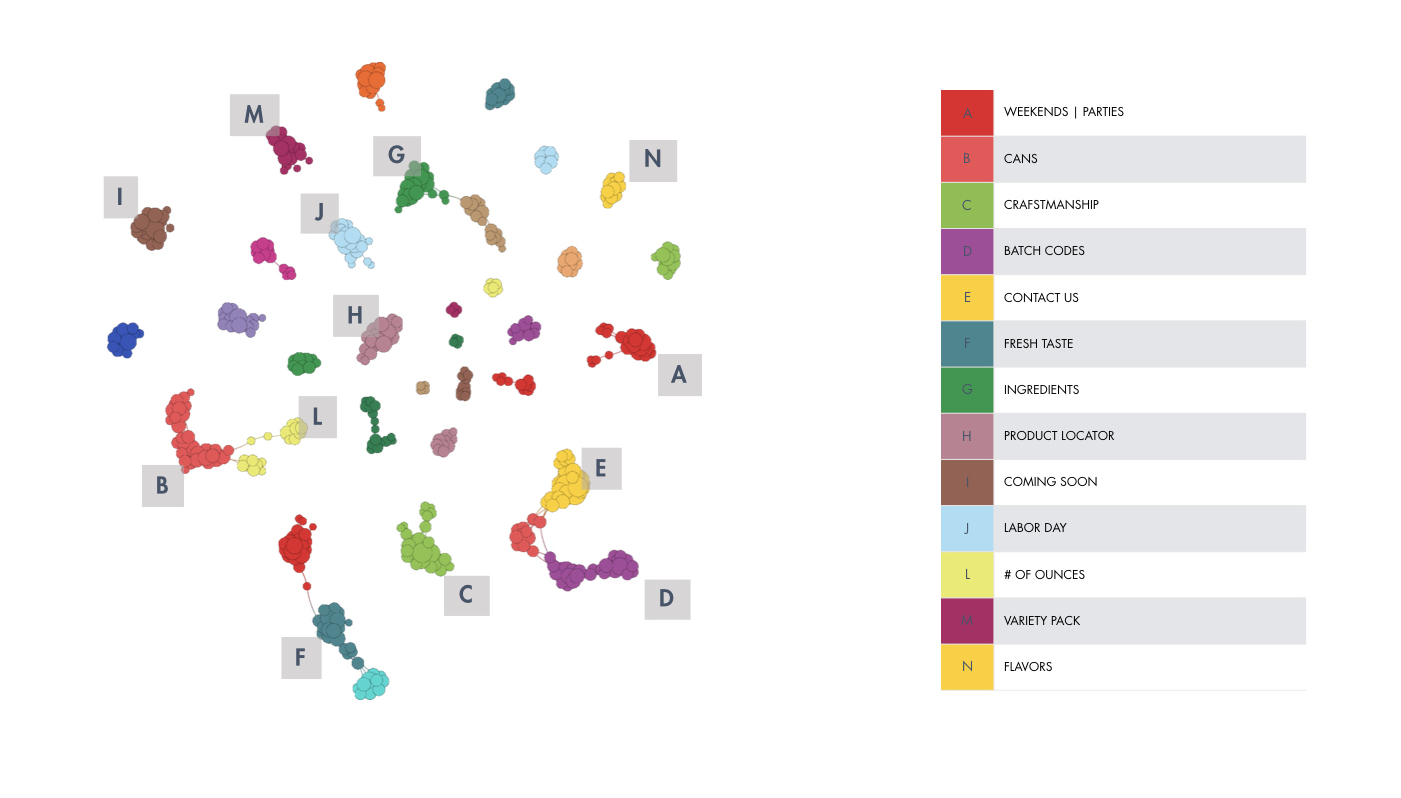 For instance, more than 6% of all tweets discussed the shape of the White Claw cans, an issue that only showed up in 0.5% of all consumer tweets. By getting a better understanding of how their customers talk about their products, White Claw can better align its outreach strategy to connect with them.

Want to learn more about how Quid can help you understand public narratives around an industry or brand so you can better align your market strategy? Reach out at hi@quid.com today.

How To Our Top 10 Blogs from 2019
Quid Staff
Examining the News What is on the minds of parent shoppers this holiday season?
Oliver Bloom
Quid Talk How Maria Ressa uses data to fight disinformation in the Philippines
Quid Staff