Over the course of the last month, New Delhi has made national and international headlines for an air pollution emergency that has deeply impacted the city’s 20 million residents. Air quality levels spiked to “severe,” the highest level possible on the country’s Air Quality Index (AQI), in several places across the city. And a rise in reports of breathlessness, chest congestion, fatigue, and weakness are just a few of the health-related side effects being blamed on the crisis.

But when it comes to these types of news events, there can be an unexpected impact for companies and industries that find themselves indirectly linked to the story. In this case, a number of companies not directly blamed for causing the air pollution emergency were caught up in the resulting coverage. To better understand how the media narrative around New Delhi’s hazardous air quality has impacted public perception of these companies and industries, both positively or negatively, we used Quid software to analyze more than 3,000 global articles written on the topic between October 10 and November 10, 2019.

Quid algorithms organized all coverage around the crisis into the network map seen below, where each dot represents a single article. Articles using similar language are grouped together to form clusters. Below, we can see that the most popular topic across the network is the impact of Diwali, the festival of lights, on air pollution (representing 16% of all articles). Hundreds of thousands of fireworks are set off during the annual celebration, which are often blamed for poor air quality during this time of year. 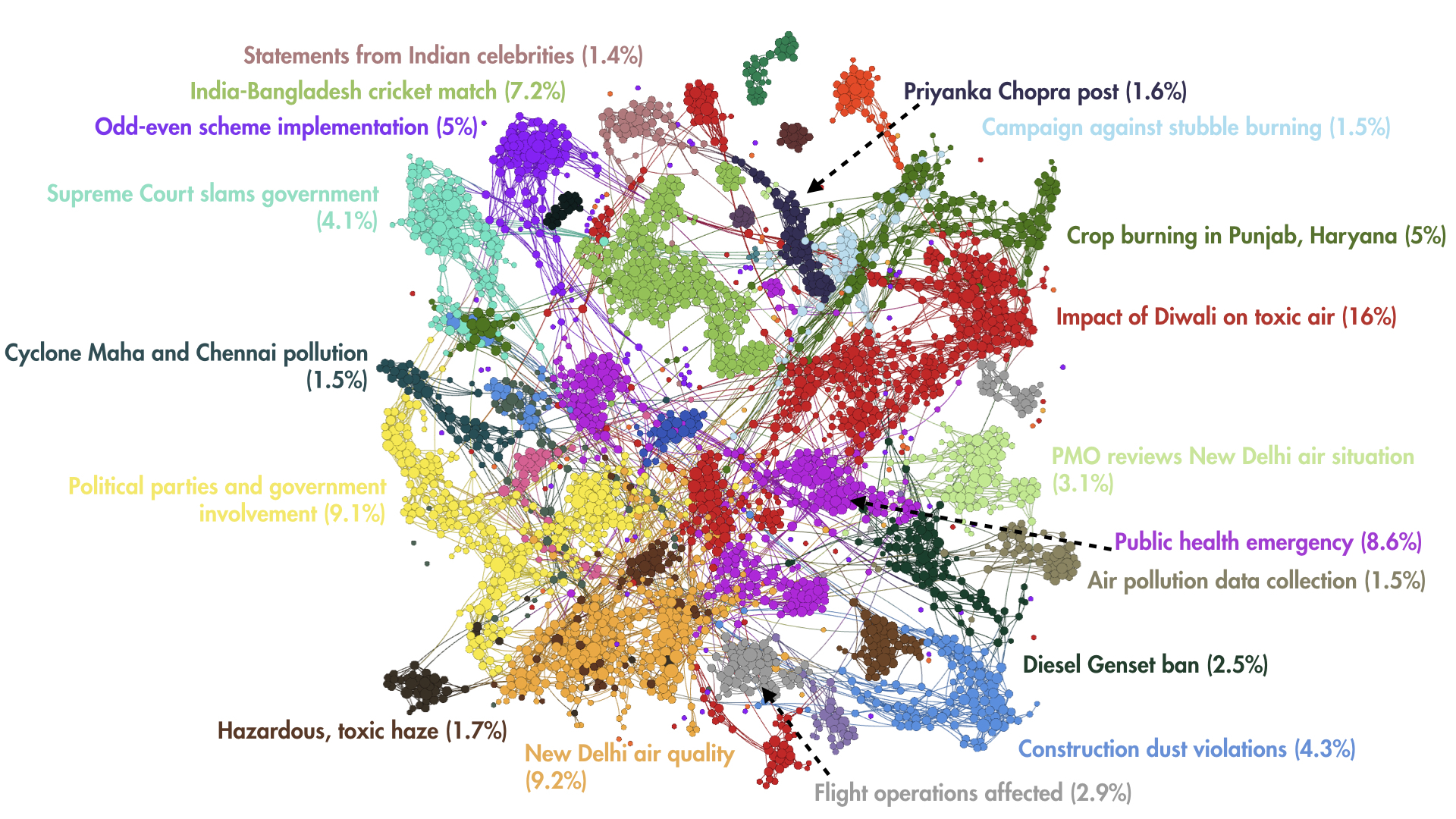 Normally a draw for tourists, the hospitality industry in New Delhi saw a drop in travel to the capital on and following Diwali

Within the Diwali cluster, Quid surfaced news about the drop in tourism and travel to the area due to the toxic air. One Bloomberg article noted that bookings and travel searches for New Delhi from Singapore, Thailand, and Qatar fell by 44%, whereas bookings and queries from New Delhi to other destinations shot up by 25% in the week after pollution hit record levels on October 27th. According to the article, many business travellers with existing travel plans wanted to reschedule for later in the year, while tourists explored other Indian destinations such as Rajasthan and the Thar desert.

In nearby Jaipur, tourism boards claim that lowered hotel tariffs helped to attract more tourists than the previous year, helping to stave off any major losses to their hospitality industry during the emergency in the capital. Local officials cited also cited a number of last minute bookings, likely from people looking to avoid the toxic smog nearby.

Despite having no direct connection to the cause of the air pollution, India’s national carrier, Air India, received the second highest number of company mentions across our news network, and articles that referenced the company were overwhelmingly negative (80% of all coverage). The company had to divert, reschedule, and even cancel flights because of the visibility issues caused by smog and a number of flights were instead re-routed to the Jaipur, Amritsar, and Lucknow airports. Information directly coming from Air India (via their spokesperson) appeared in less than 20% of all coverage, revealing an opportunity for the company to assert greater control over the news narrative.

Private airline IndiGo, which controls nearly 50% of India’s domestic market, received the lion’s share of negative coverage (100% of all articles) among the group. Though the low-cost carrier similarly wasn’t being blamed for the pollution, they did suffer a system outage that led to dozens of flight delays and cancellations in addition to those caused by visibility issues.

Below are the top 12 companies that appeared in media narrative around New Delhi’s air pollution emergency. The number of times that the company appeared in news articles can be found on the right side of the chart and bars are colored by the relative percentages of positive, negative, and neutral coverage. Both Air India and IndiGo are highlighted for direct comparison. 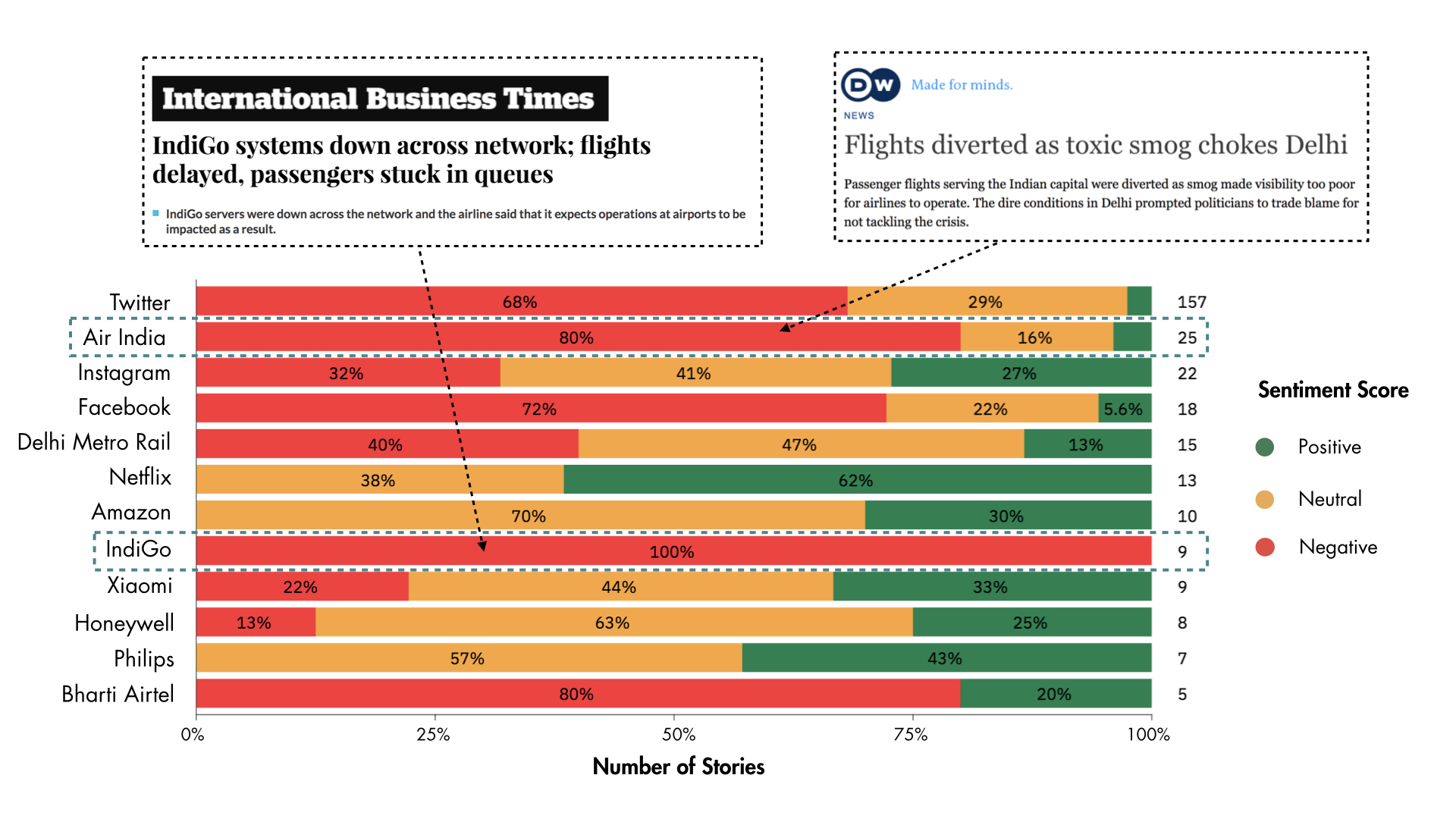 Figure 2: Stacked bar chart showing top companies mentioned in the news network. Colored by article sentiment with labels on the left showing the total number of articles that mentioned each company.

When comparing coverage timelines for the two air carriers, the public response was acute but short-lived

Both Air India and IndiGo were only in the press for three days before mentions of the companies dropped off entirely. While Air India’s coverage both appeared and spiked on November 3rd with no prior warning, news around IndiGo didn’t peak until a day later, revealing a potential missed opportunity to get ahead of the story.

On November 3rd, articles mentioned the company's reported systems delay, but mostly focused on passenger tweets (“chaos”, “huge queues”) rather than the IndiGo’s official statement. In fact, the only voices heard in subsequent stories about the airport delays were passengers; the airline both neglected to comment about the ongoing problem and did not release any other official statements that were picked up by the media.

In the chart below, you can see the number of stories for each day and for each company (green for Air India and red for IndiGo). While news coverage of Air India quickly tapered off after the first day, IndiGo saw a delayed spike in coverage. 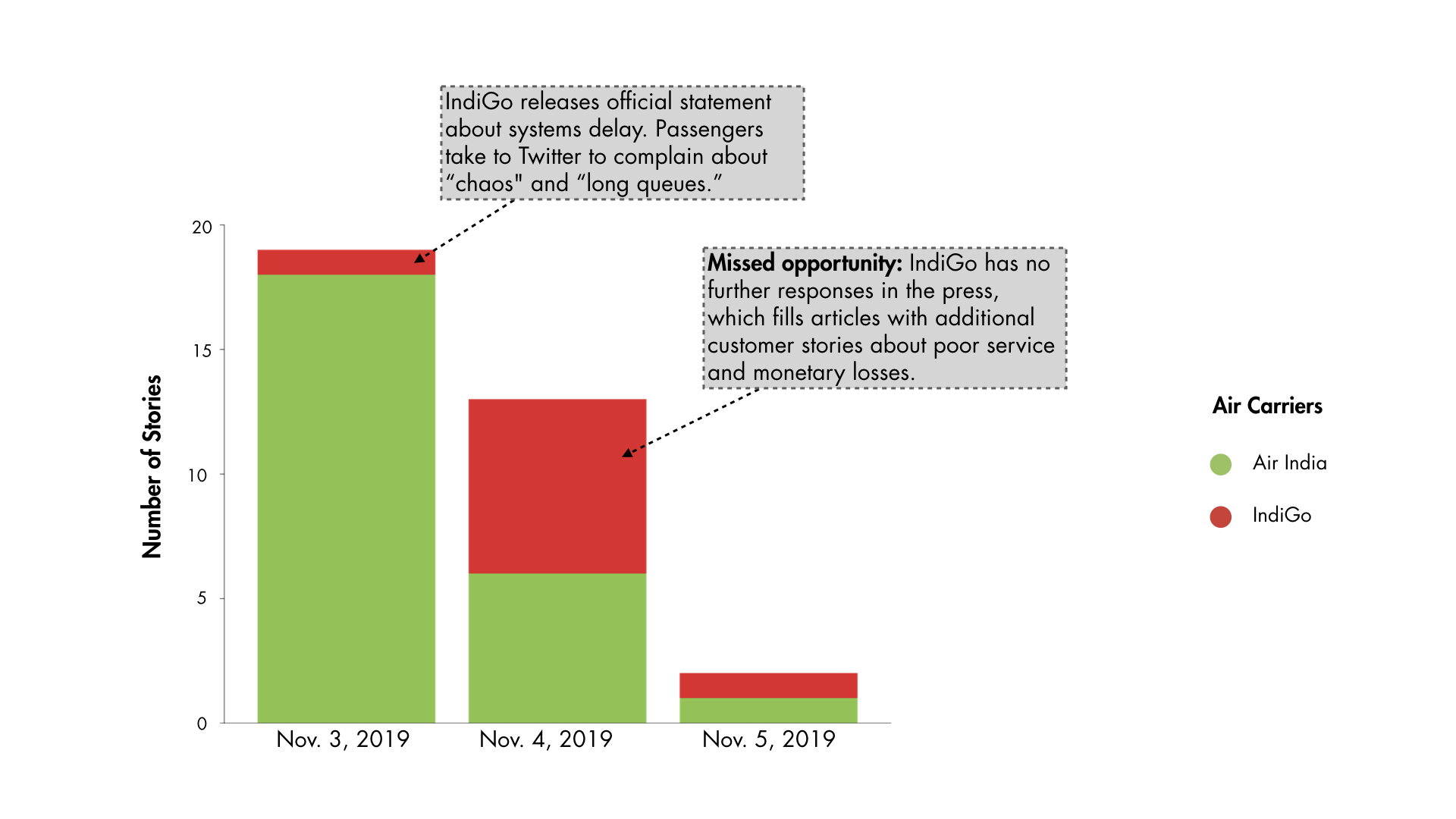 Companies with sponsorship deals see little to no impact

Telecommunications company, Bharti Airtel, which sponsors the Delhi marathon, was also swept up in negative coverage around the city’s air quality. Despite moving up the date to avoid any pollution from Diwali, air quality levels spiked to “very poor” levels in the days leading up to the race from farmers burning crop stubble north of the capital. Though the company was not the direct focus of any article, headlines referenced health concerns and “gas chamber”-like conditions that awaited some 40,000 runners that had signed up for the October 20th event—not the ideal scenario for any corporate sponsor.

Though the majority of coverage that mentioned Bharti Airtel was negative (80% in Figure 1, above), air quality levels saw some improvement ahead of the race and the story stayed largely under the radar (both in the press and with online readers) compared to other companies on our list.

The scatterplot below compares the visibility of top companies in the New Delhi media narrative both in the media and online. Seen in the bottom left corner, Bharti Airtel received comparatively little media coverage and online interest relative to other companies on that list. 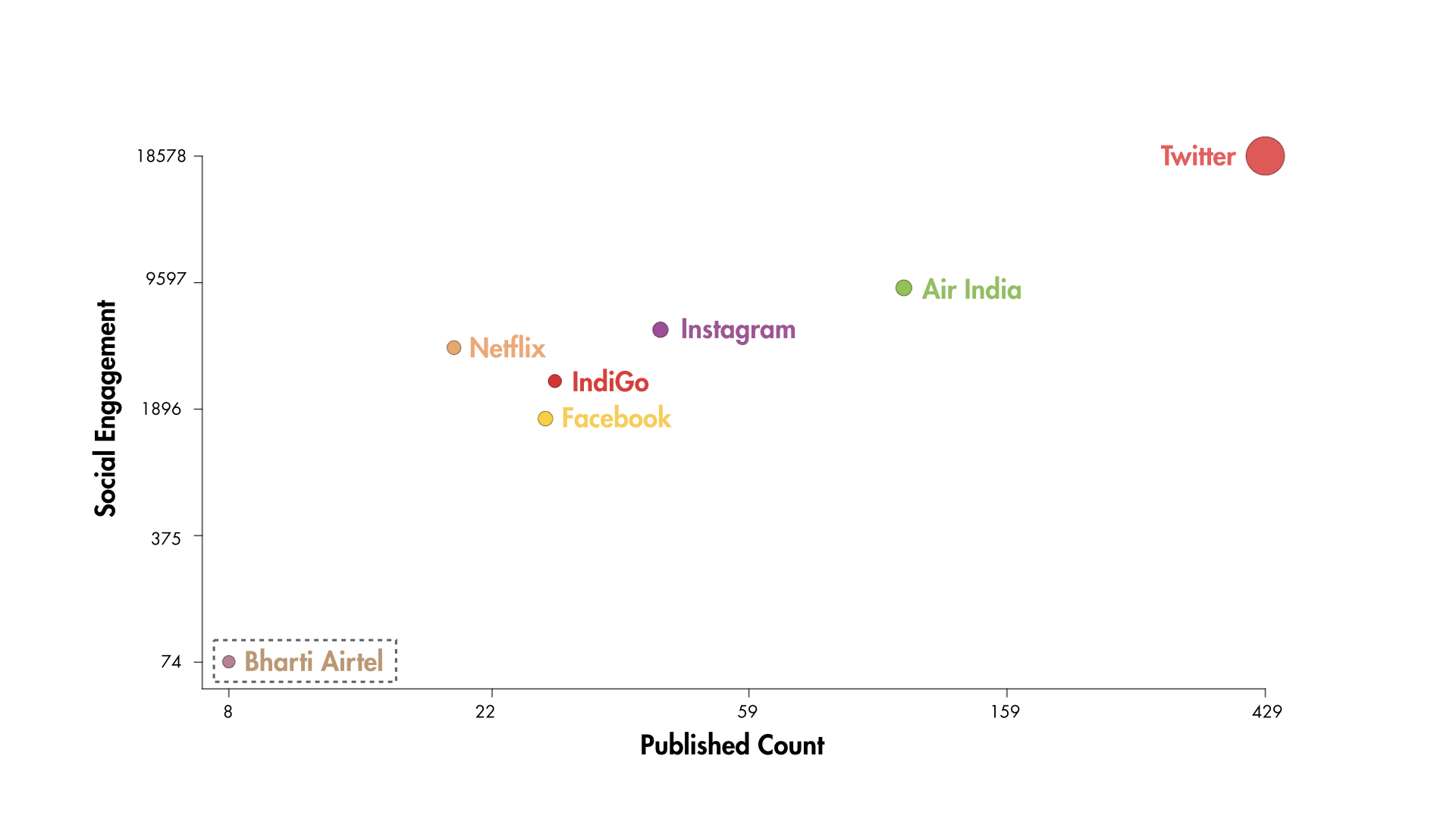 Elsewhere, a scheduled T20 international cricket match between India and Bangladesh reaped widespread criticism after top players were photographed practicing in protective face masks. Despite the outcry from environmentalists, who urged the Board of Control for Cricket in India to reschedule the match, it went on as planned on November 3rd. Though articles on the match represented 7.2% of all coverage on Delhi air quality from the past month, we found no mention of any of the official company sponsors for either team: the learning app Byju’s (India), and consumer goods company Unilever and its Lifebuoy soap product (Bangladesh).

The graphic below shows representative headlines from articles covering the upcoming match. Though this topic generated a lot of interest with readers, company sponsors for both teams were absent from the discussion. 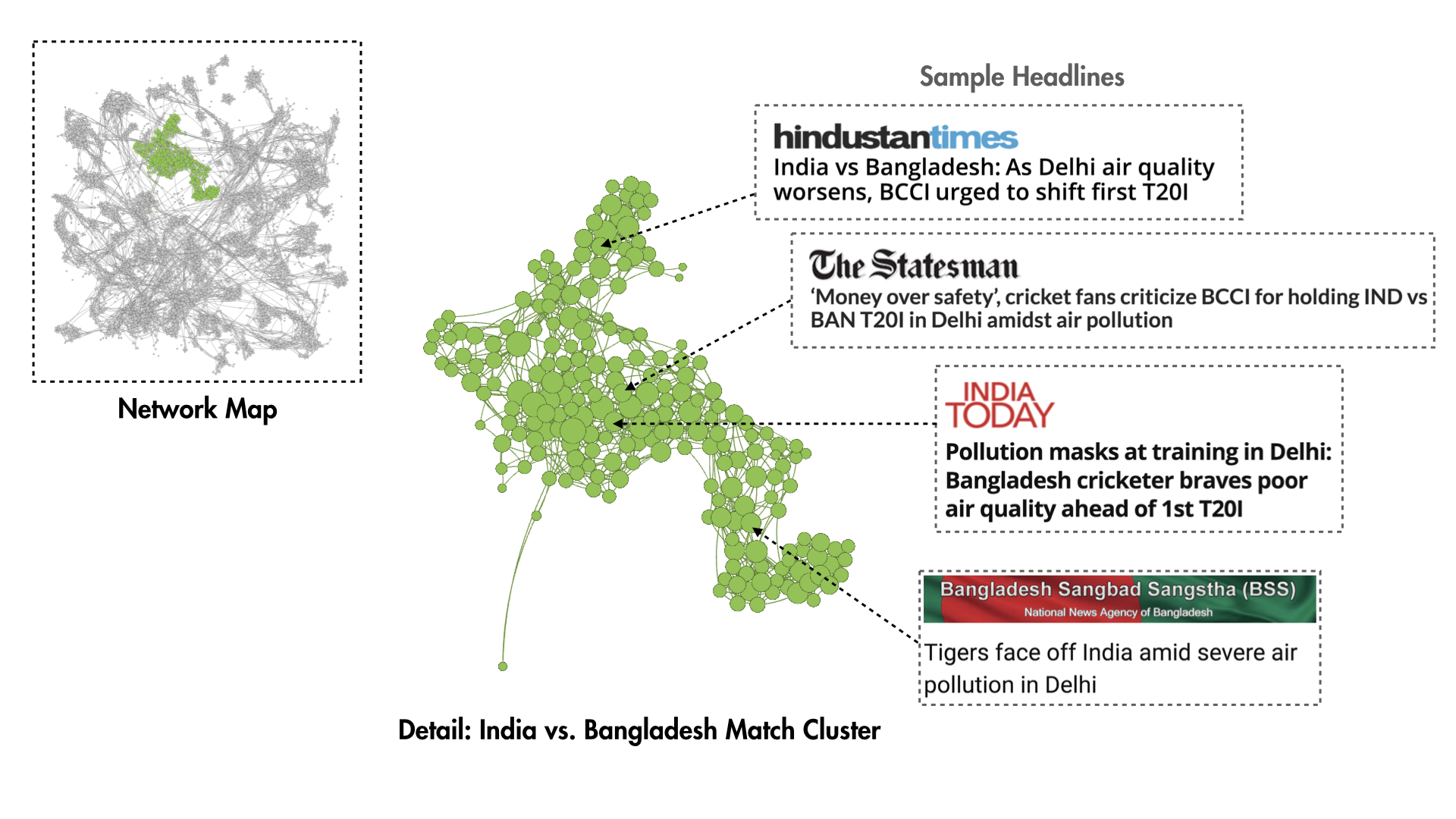 Figure 5: Detail of the India vs. Bangladesh cricket match cluster with sample article headlines. We found no mention of either team’s company sponsors in the narrative.

Producers of air purifiers, Amazon, and Netflix saw a boost in positive coverage

It’s not all bad news. One notable group saw a spike in sales and positive coverage during the air quality emergency—the air purifier industry. Air purifier sales reportedly jumped 25-30% following the Diwali celebrations. In the linked article, an Amazon India spokesperson revealed that the company saw three times as many air purifiers sold from October 31 to November 3, compared to last year. Popular brands like Honeywell, Philips, and Xiaomi represent some of the few top mentioned companies within the news network to earn higher rates of positive and neutral coverage. Purifiers that offer High Efficiency Particulate Arrestance (HEPA) have been particularly well-received.

Streaming media service Netflix also received some unexpected, but positive press for its connection to Priyanka Chopra Jonas, who posted a picture of herself wearing a mask to Instagram to protest the hazardous conditions. Jonas had been shooting the upcoming Netflix series, The White Tiger, in the Indian capital. Her #righttobreathe post and the resulting coverage generated enough buzz online that she received greater mention in the press than even Indian Prime Minister Nahendra Modi and pushed Netflix’s brand visibility to near parity with social media giants Facebook and Instagram. 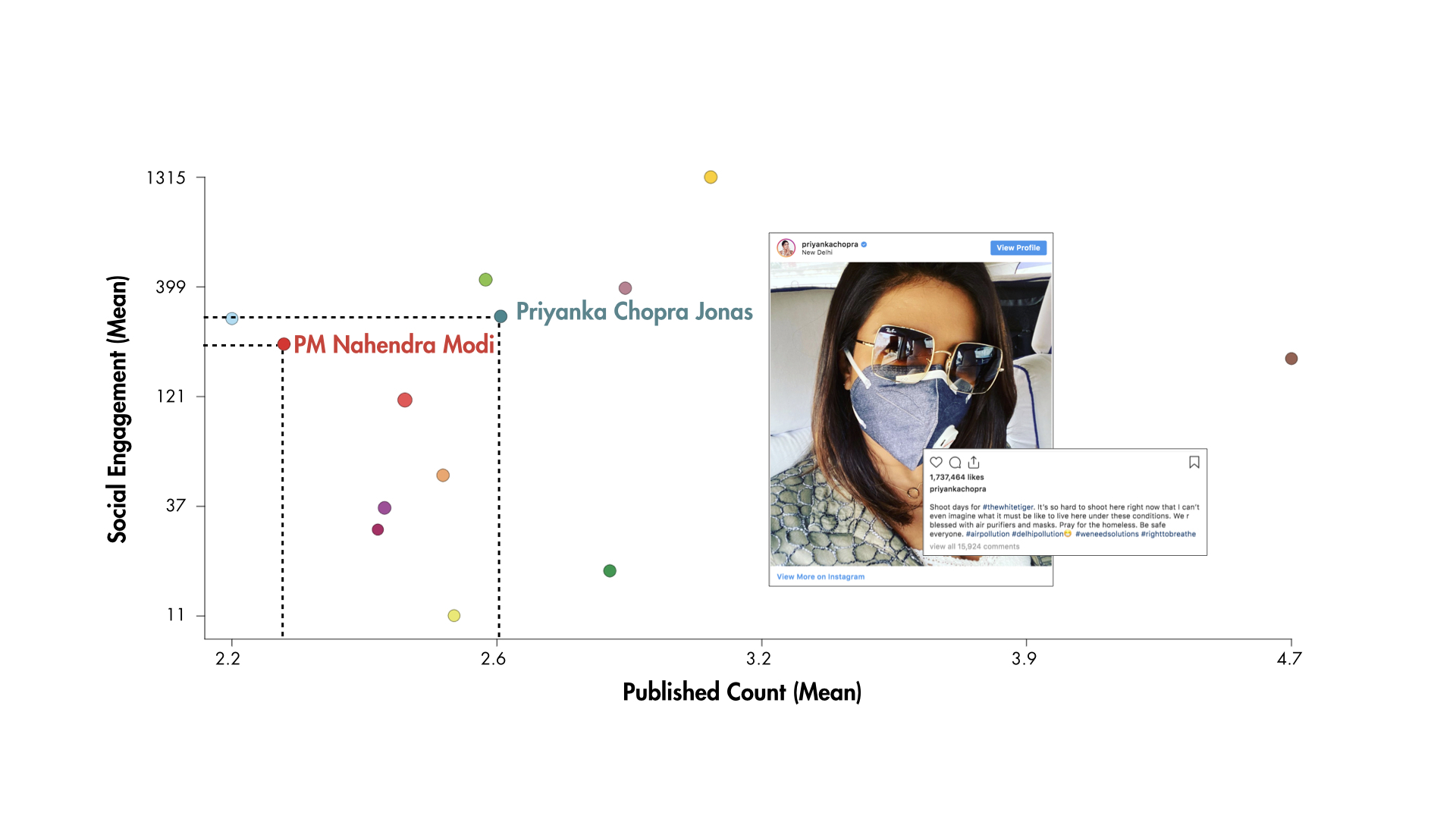 In general, Twitter, Instagram, and Facebook played an outsized role the conversation as they became the go-to mediums through which celebrities, politicians, various organizations, and ordinary citizens could voice their thoughts on the air quality emergency. Though Instagram got a boost from Jonas’ aforementioned post, Twitter saw widespread mention across the entire news narrative with stories of Delhi Chief Minister Arvind Kejriwal using it to encourage citizens to carpool in order to help alleviate the city’s pollution levels, Bollywood actor Arjun Rampal expressing his dismay about the situation and urging citizens to wake up, and the Union Minister for Health using the platform to share tips on how to avoid away from pollution-related health risks.

As we can see from the analysis, companies can quickly get caught up in news events outside of their control or to which they have no direct connection. That’s why monitoring coverage of your company, industry, or brand is the first step in any successful outreach or crisis management campaign.

Want to learn more about how Quid can help your company assess and respond to the unexpected news events? Reach out at hi@quid.com.

Examining the News How your company can avoid becoming the next Equifax
Vishesh Mehta
Market Landscape Comparing the media narrative and industry landscape for facial recognition technology
Maggie Mazzetti & Tejas Sirohi
Examining the News Coverage of YouTube’s policies has spiked. This is what it means for the company.
Quid Staff