As part of Atomico's annual State of European Tech report, Netbase Quid helped visualize the techlash conversation in the media. Julie Kim, Netbase Quid’s data analyst in London, also analyzed the Series A ecosystem as part of our initial research for the report. This research was not included in the final report, and appeared in a Medium post by Atomico, which you can read here.

Who are the Series A startups in Europe? Where are they headquartered, what are they focused on, who is investing in them, and how is money flowing from one country to another? Netbase Quid used our embedded organization dataset and the explicit network analysis to paint a comprehensive landscape of European Series A startups.

Among European-headquartered companies founded since 2014, there are 709 companies that have received funding amounts between $7 million and $15 million. The largest number of them are developing Big Data and AI/Machine Learning technology (10%), followed by Energy and Renewables (9.2%), Medical and Healthcare (7.6%), and Blockchain and Fintech (7.3%). While BioTech and Medical startups are building up their own area by using unique language to describe their businesses, Big Data and AI, Blockchain and Fintech, Automotive and Transportation were consistently used similar language. 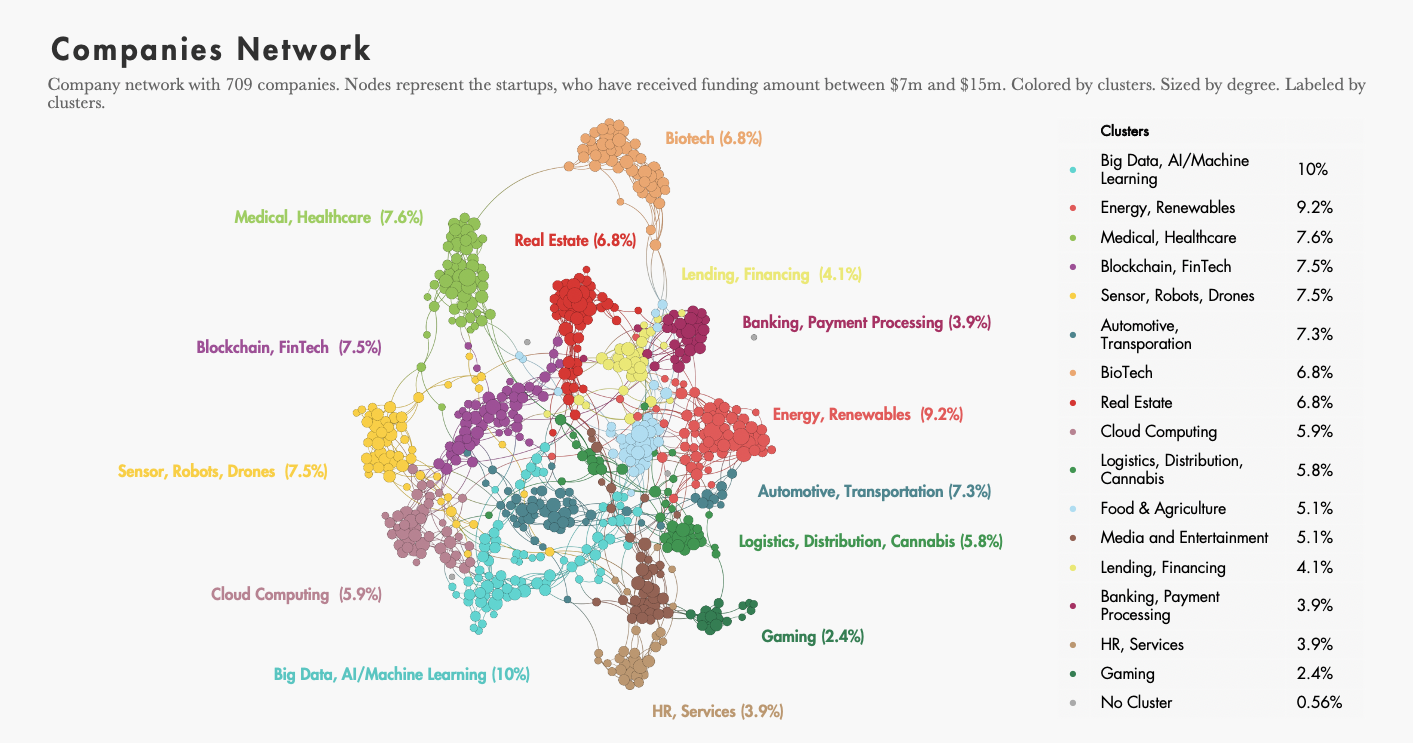 35% of the companies were based in the UK, followed by the 16% in France. While the UK, France and Germany showed large variety in startups’ focus, other countries were more homogenous in terms of sector. Almost one third of the funded startups in the Netherlands focused on Automation and Transportation while one third of the ones in Finland focused on Sensor, Robotics and Drones. 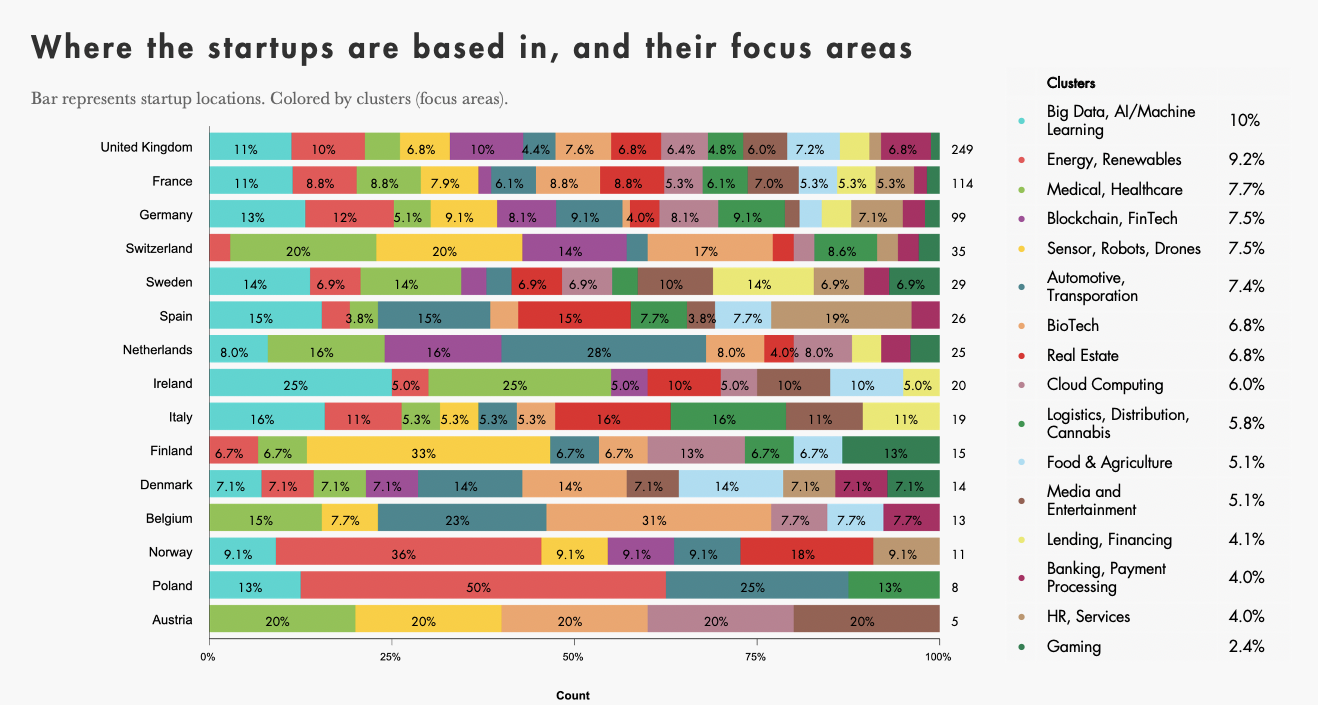 Netbase Quid then scripted an explicit network to show the explicit relationship between these startups and their investors. Each node represents either an investor or a targeted startup and the nodes are connected if the investor has invested in the companies. 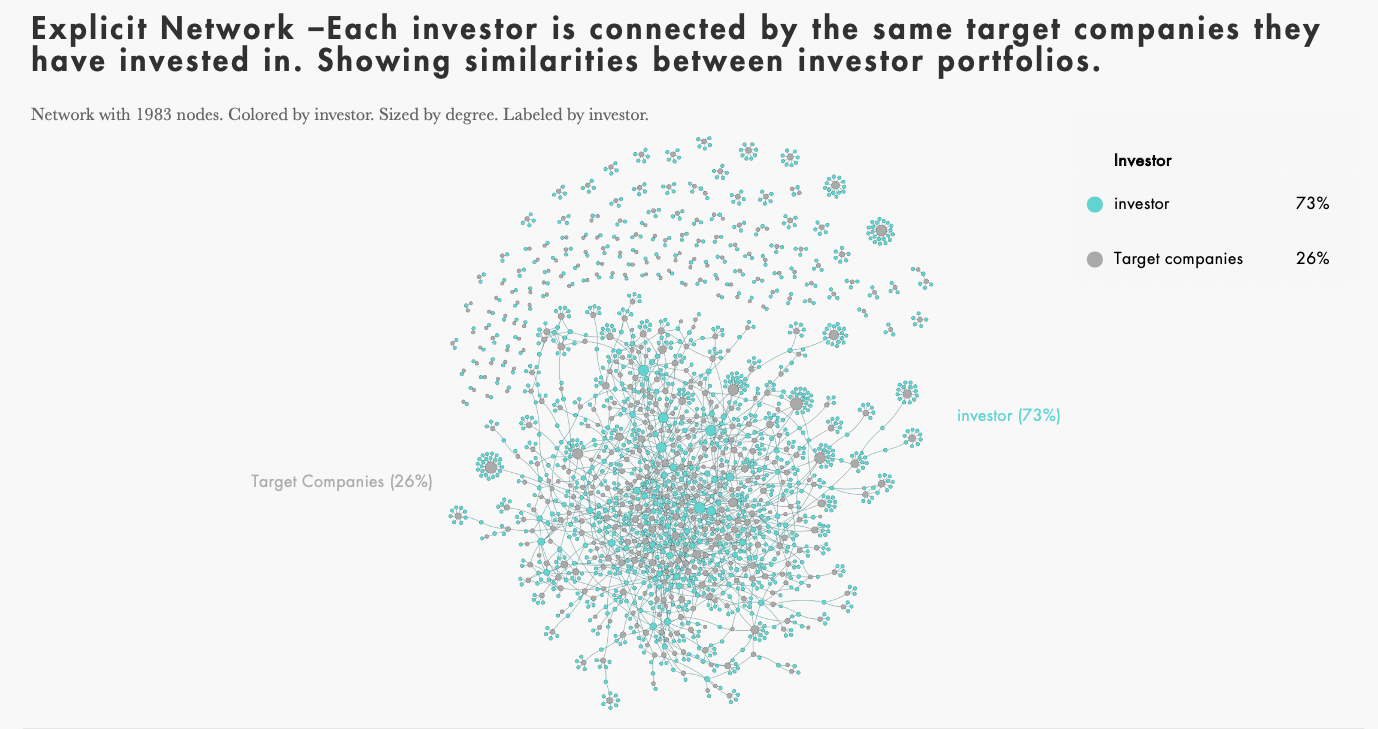 The explicit network allowed us to conduct a deep-dive analysis on the investors. We found that European investors tend to invest in companies from the same countries, especially investors from France, Spain, and Germany. Investors based in the Netherlands and Luxembourg were some of the most diversified while Swiss investors’ investments were divided between Switzerland and German startups. 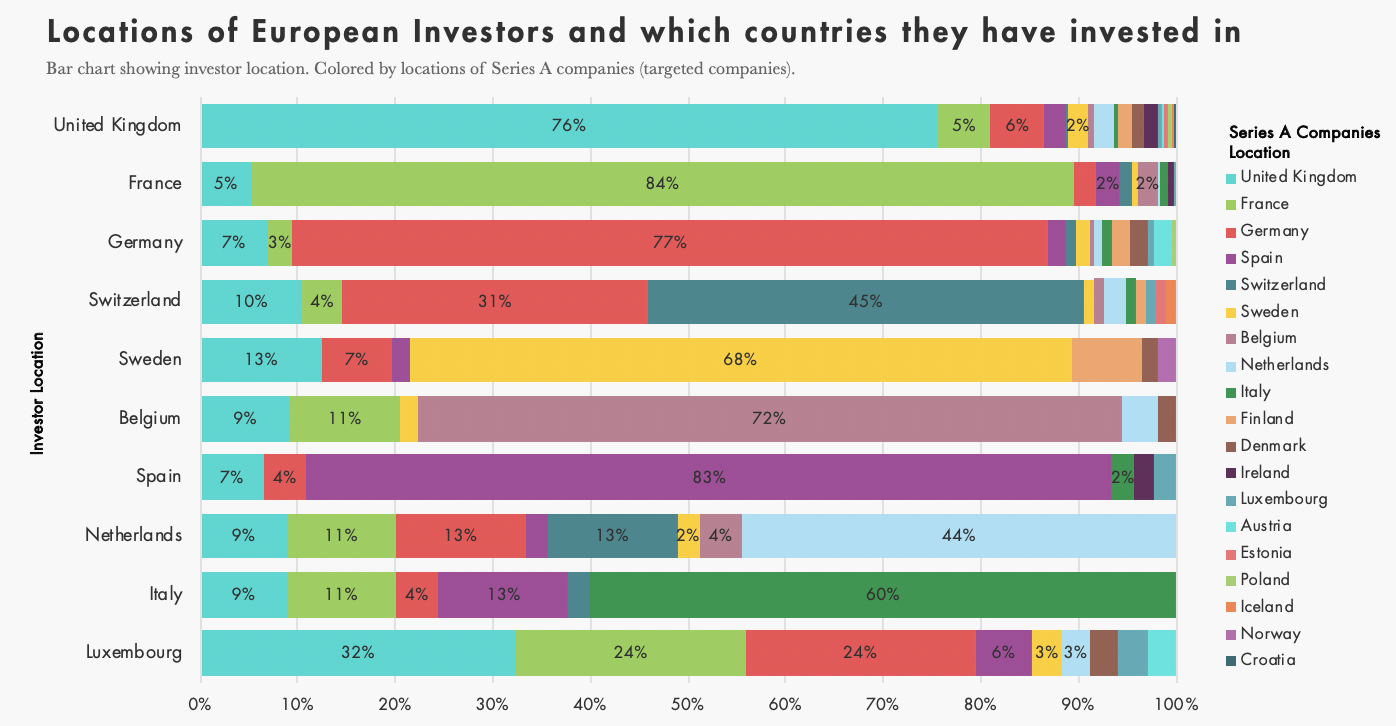 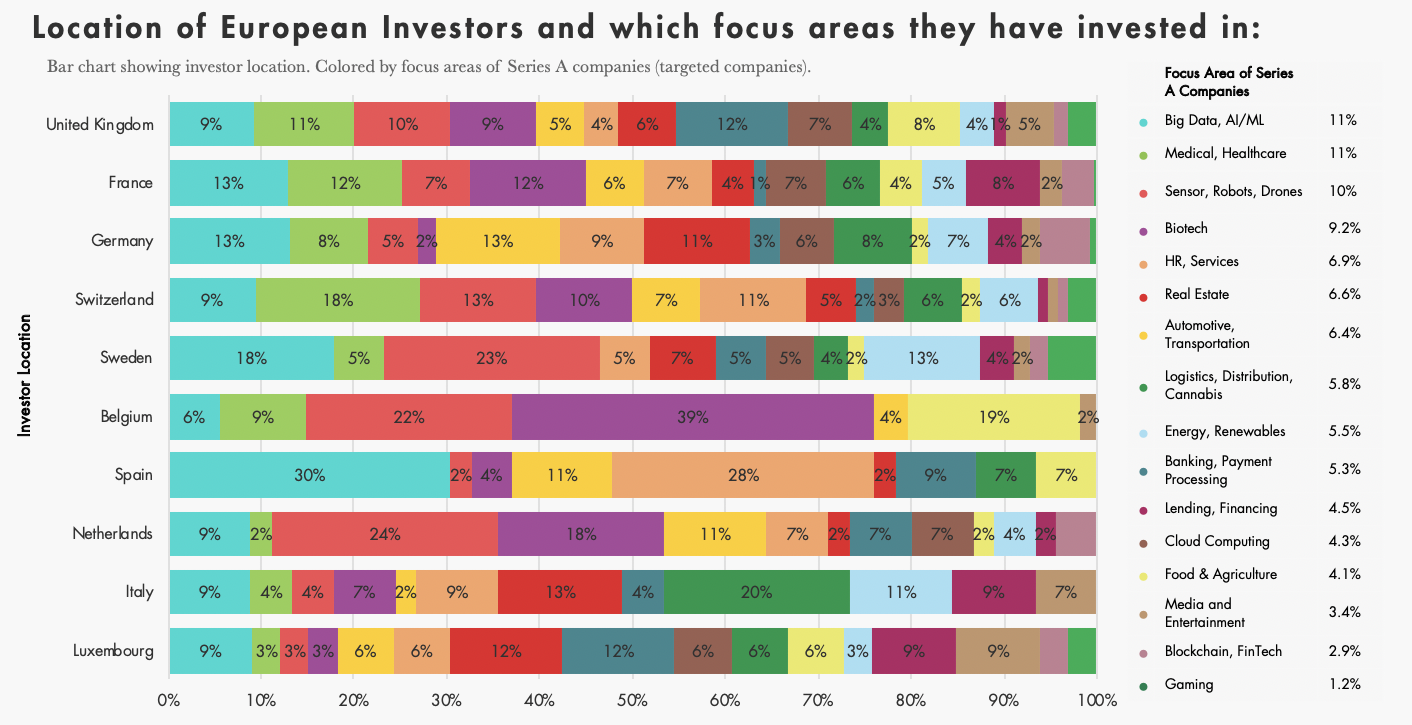 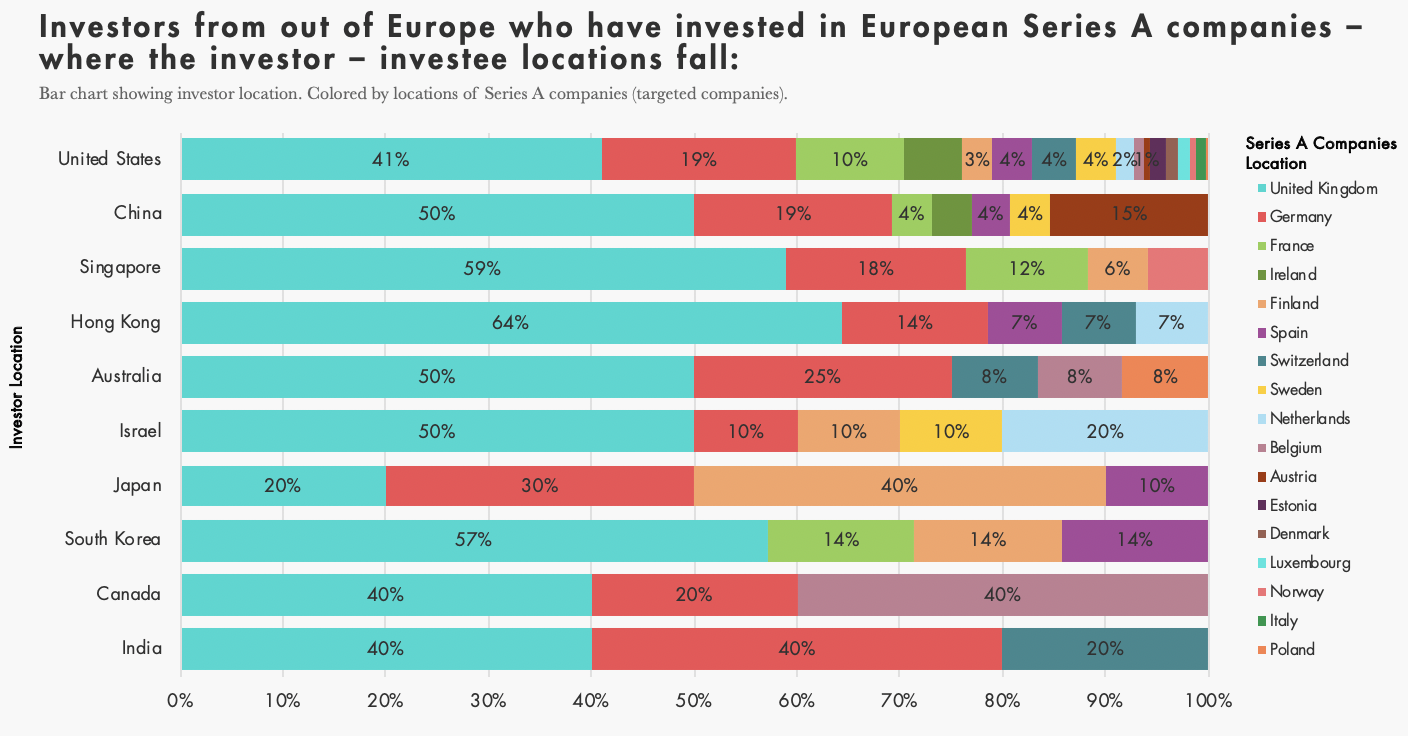 Non-European investors tend to be more focused on specific areas compared to Europeans. While US and Chinese investors were the most diversified, Hong Kong had the highest focus on Real Estate and Properties, Israel on Media, and Canada and Japan on Auto, Insurance and Transportation companies. 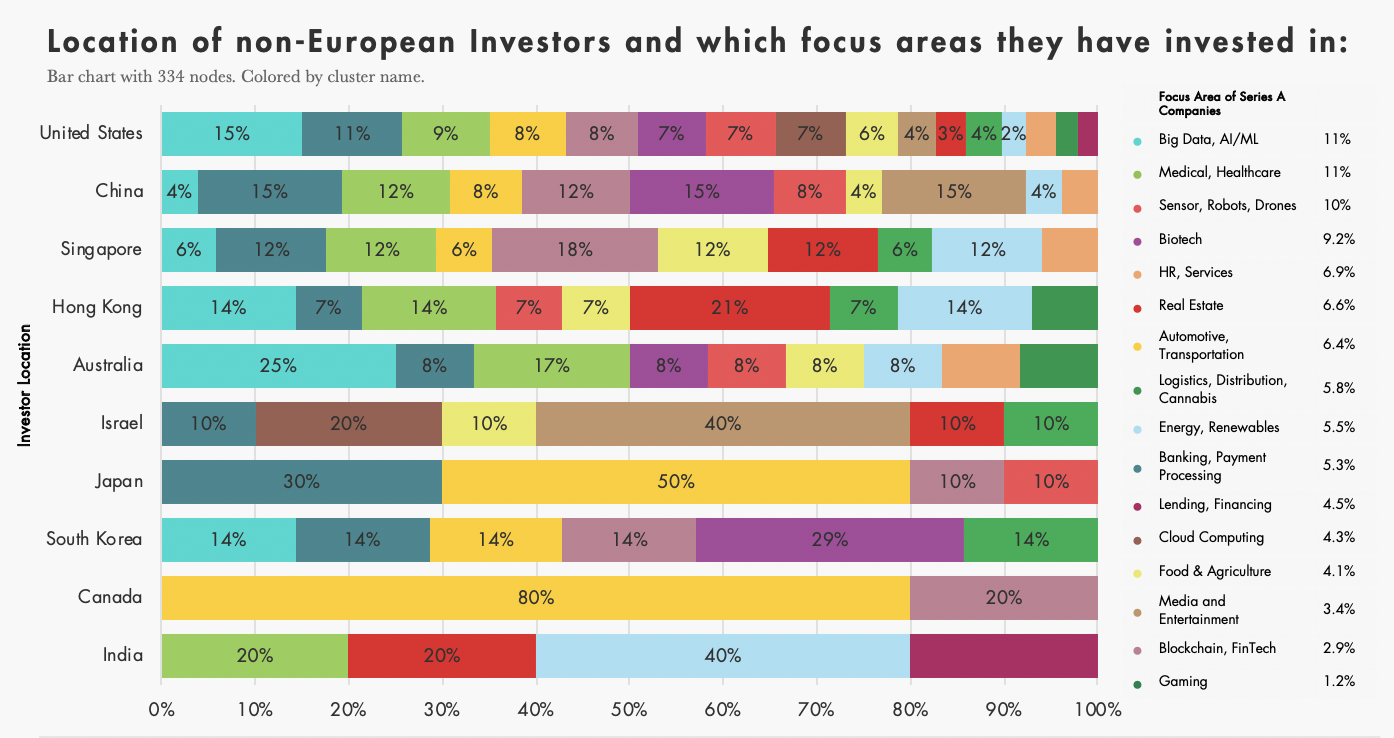 Top Investors in terms of the number of companies they have invested in were as following: 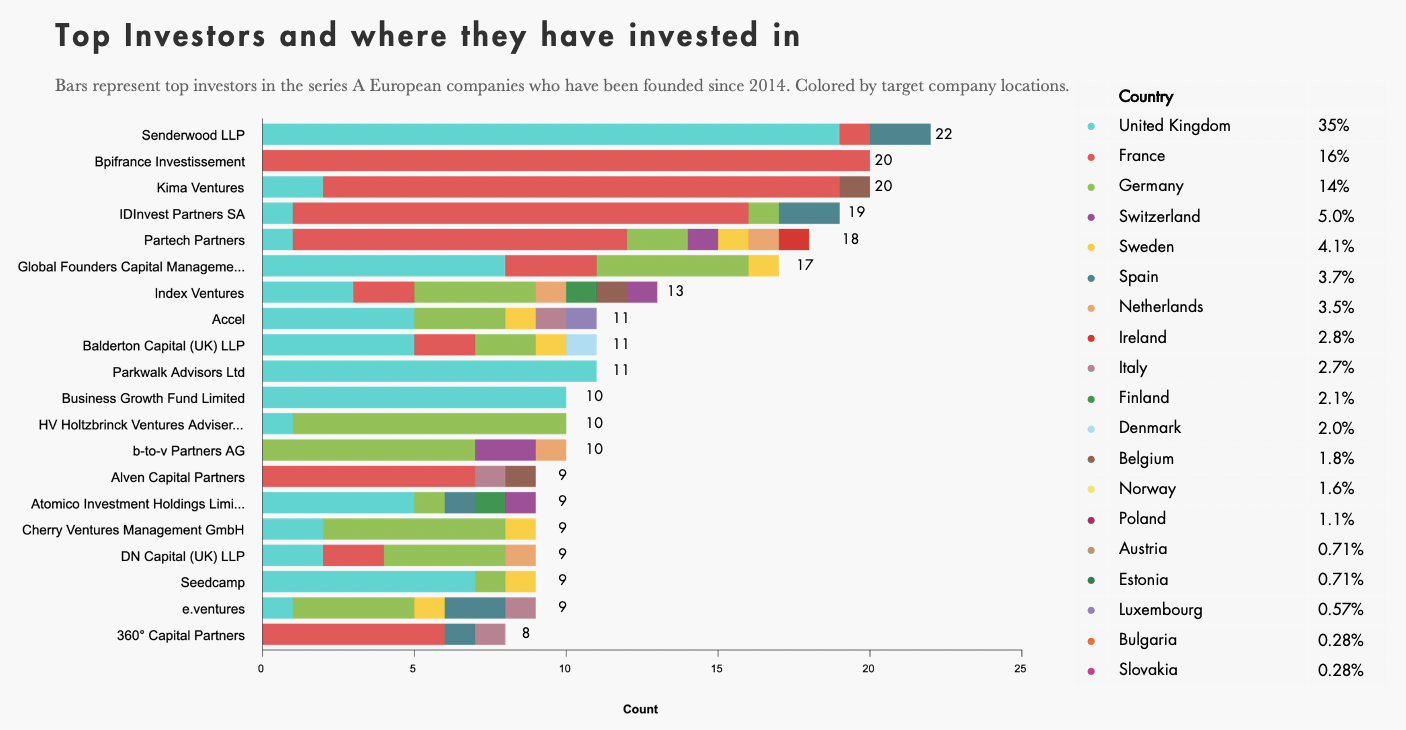