Unless you count the Apple Watch, Apple hasn’t taken any game-changing leaps recently. But there are plenty of signs that it will.

As CEO Tim Cook hinted last year, there’s a lot percolating behind the scenes. “There is quite a bit of investment in [R&D] and in products and services that are not currently shipping or derivations of what is currently shipping,” he said during an earnings call. “... But you can look at the growth rate and conclude that there’s a lot of stuff that we’re doing beyond the current products.”

So what are the new products? And could they be in dramatically different industries than Apple’s current offerings?

Using Quid, software that uses machine intelligence to visualize massive amounts of text-based data, we made our most informed predictions about what Apple has in the works.

In the three-part analysis below, we’ll use news data to better understand the rumors around Apple’s secret projects and then compare those findings to Apple activities in acquisitions, investments, and filed patents. Tying all three pieces of analysis together gives a unique multi-layered view into roughly a decade of research and development strategy at the world’s most valuable company.

Apple in the news

In Quid, we ran a quick high-relevance news search that produced the network below in under a minute. 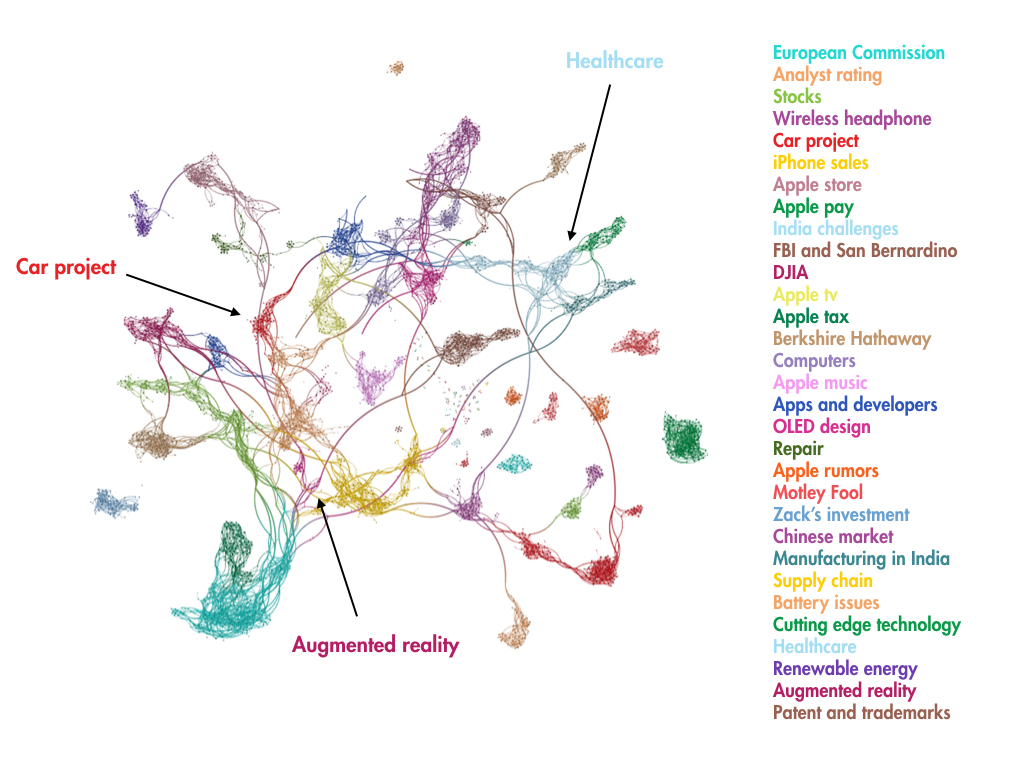 Quid broke out the 4,180 news stories from the past year into unique themes based on colored sections. In a Quid network, each node represents a body of text, in this case a news article or blog post. Links between nodes represent semantic similarity between the stories. The stronger the similarity, the closer they get pulled in together.

A few clusters stood out, mainly because they generated significant news volume but Apple has not made its plans for them public: the car project, augmented reality/virtual reality, and healthcare.

Let’s first look at the car project cluster. Of the three main focus areas we’re examining, this cluster has the most traction, accounting for 4 percent of the network or 154 stories. While a number of articles dismiss the car project as a rumor, others suggest it's in full swing. One such report, citing an Apple letter to NHTSA, says: “The Company [Apple] is investing heavily in the study of machine learning and automation, and is excited about the potential of automated systems in many areas, including transportation.”

The latest development, just last week, was a widely circulated report that Apple has been cleared for road tests of self-driving cars in California — fairly definitive proof that Apple is indeed moving ahead in this area. 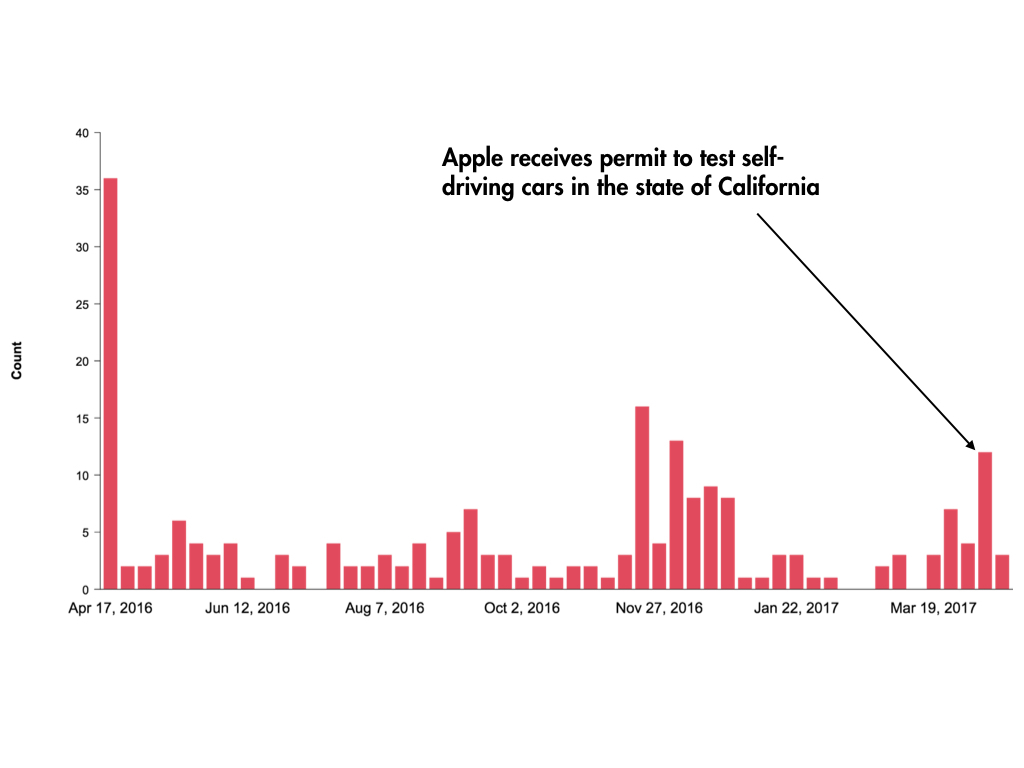 After the media overview, we switched into the timeline view to understand current discussions around the Apple car. The image here shows that the bulk of the conversation took place between April and December of 2016. After a lull, however, there was another spike last week when the California DMV granted Apple a permit for self-driving cars.

In health, we found two distinct clusters: Healthcare and Smartwatches, which collectively account for 4.4%, or 226 stories. By zooming in to the sub-cluster level in Quid, we can see that the focus area has four unique sections — health and medical research, Apple Watch accessories, fitness, and the Watch itself.

The sub-clusters show that the conversation is largely speculation around improvements to the Apple Watch’s vital sign tracking features. A few things to note: Last summer, Apple acquired Gliimpse, an electronic medical health records company that makes sharing electronic medical records safer and easier. And finally, according to a report, Apple seems to be aiding in the fight against epilepsy through a new data collection app for the watch. Could Apple be steering beyond Fitbit territory, repositioning the Apple Watch as an ultimate fitness tracker and serious health monitoring and assistance device? 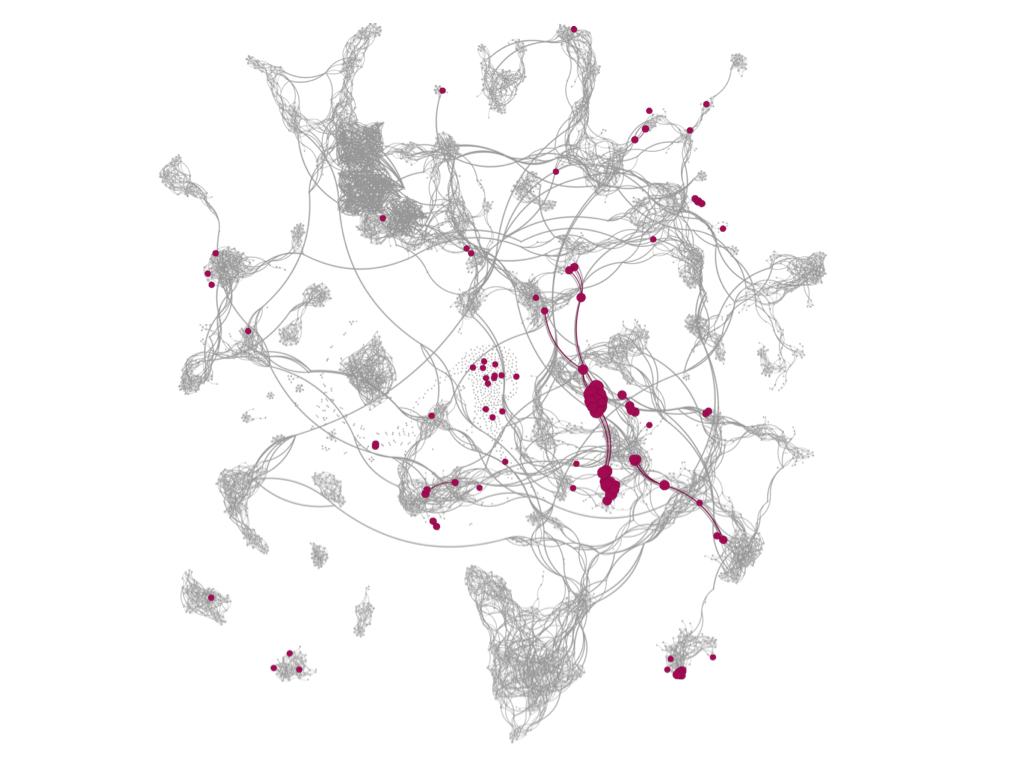 The last focus area in news data: augmented reality. The cluster around AR included articles from other clusters, so we combined them into one view to examine the key ideas.

Similar to the other two focus areas, plenty of articles pointed to a move into this space, including a report that Apple could possibly incorporate AR into the next iPhone, which would make it a competitor to the current Samsung VR gear and HTC headset.

Although the three clusters in the news network are far from each other in the map, Quid showed us a few bridging nodes where the three areas overlap. In one story in the network, Cook explains how the Apple Watch could incorporate AR experiences.

Next we wanted to compare what we learned from the news network to other datasets in Quid. In the new expanded companies dataset, we looked up every company Apple has acquired or invested in over the past ten years. This gives a hint at both Apple’s broad investment intentions and company descriptions, acquisition details, and top investors for each company. 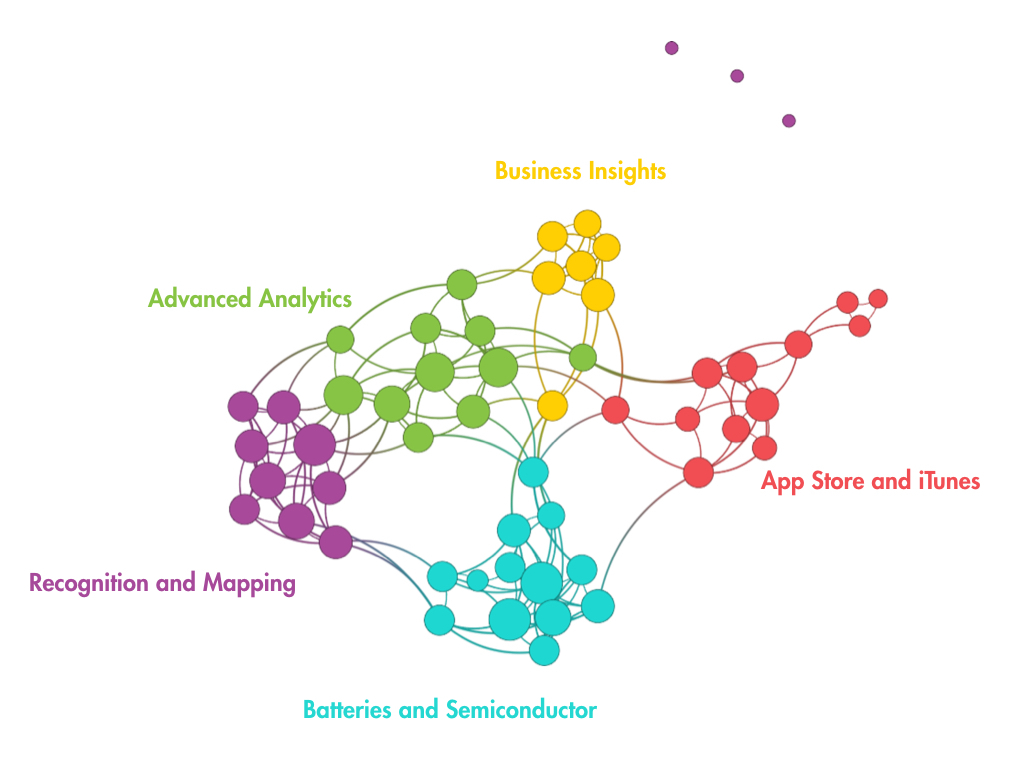 A decade of Apple investments

At left is a Quid network showing a decade’s worth of Apple investments.

Apple has acquired or invested in 55 companies since 2007, with a total spend of $6.7 billion. The network is broken out into five unique themes or clusters, depicted by color groupings, with the Batteries and Semiconductors theme accounting for a majority of the space at 23%. 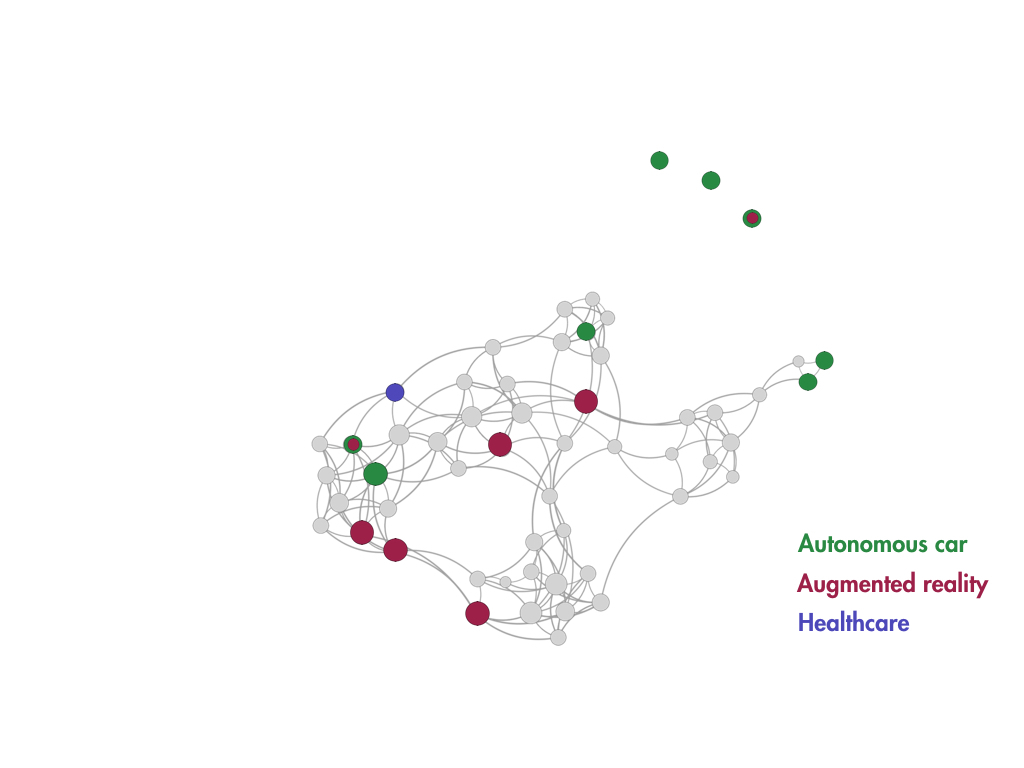 In Quid, each company description tells us whether or not they’re tied to the three focus areas from the news search (autonomous cars, health, and AR). The companies shown here are connected to one or more of those areas.

In health, Quid again brought us to Gliimpse, which Apple acquired in 2016. It was the only health-related acquisition, but significant because it would allow Apple Watch wearers to track and share their own medical records.

We learned from the news network that Apple invested in Kuaizhi (now Didi) in 2016. Didi is the biggest Chinese ride-sharing service, suggesting that Apple is not only interested in autonomous cars but also in ride-sharing services. FlyBy Media falls under both autonomous vehicles and AR/VR, due to its broad range. Apple acquired the computer vision company in 2016. FlyBy introduces new capabilities in the fields of large-scale SLAM (Simultaneous localization and mapping), indoor navigation, sensor fusion, image recognition, and 3D tracking.

We can see that six companies in Apple’s acquisitions portfolio are connected to Augmented/ Virtual Reality: FlyBy Media, RealFace, Faceshift, PrimeSense, Metaio, Matcha. Apple’s acquisition of Metaio back in 2015 is of particular interest because of the startup’s Unifeye Mobile platform, which helps to create augmented reality applications for iPhone, Android, Symbian, and WinMobile devices. PrimeSense, acquired in 2013, is a 3-dimensional sensing device that can see, track, and react to user movements outside the computer.

While Apple’s investment track record shows small moves into healthcare, the money it has directed at AR/VR and autonomous vehicles indicates a serious push into these spaces.

Next, let’s see what we can decipher after adding patent data to the mix.

Because Apple Inc. has filed a massive number of patents in the past decade, we chose to confine the timeframe from 2013 to present, which generated 6,349 patents. 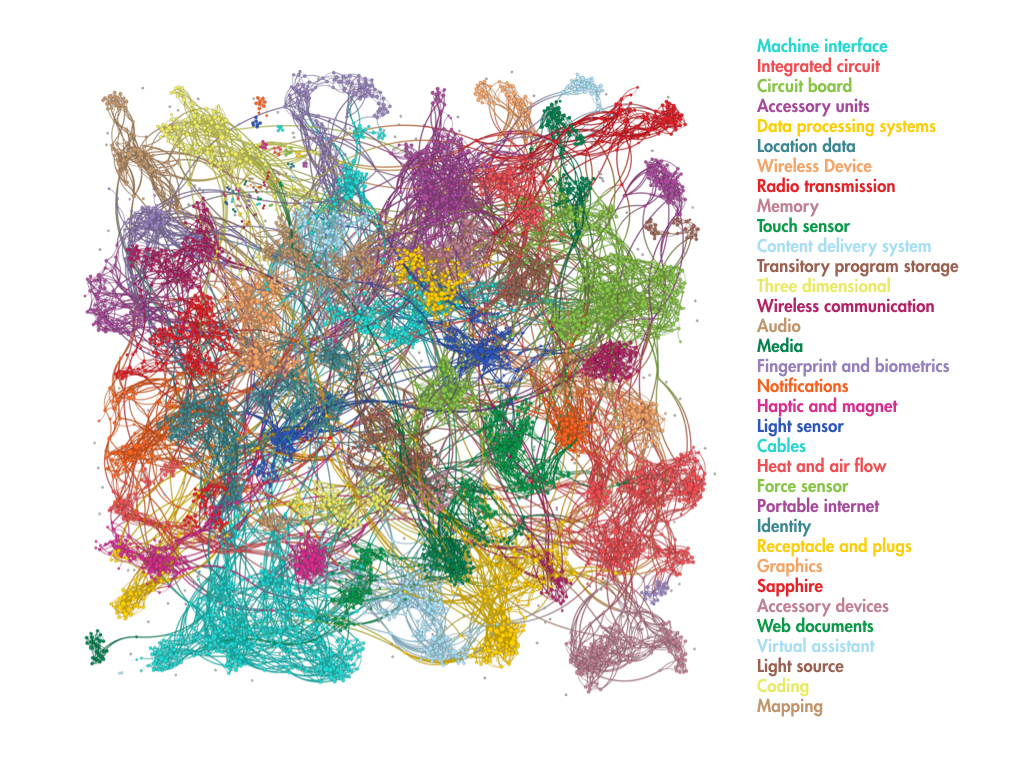 First up, augmented reality. Remember that the Companies dataset in Quid showed us that Apple did make acquisitions in this space, but news reports had few details on specific AR-related projects. 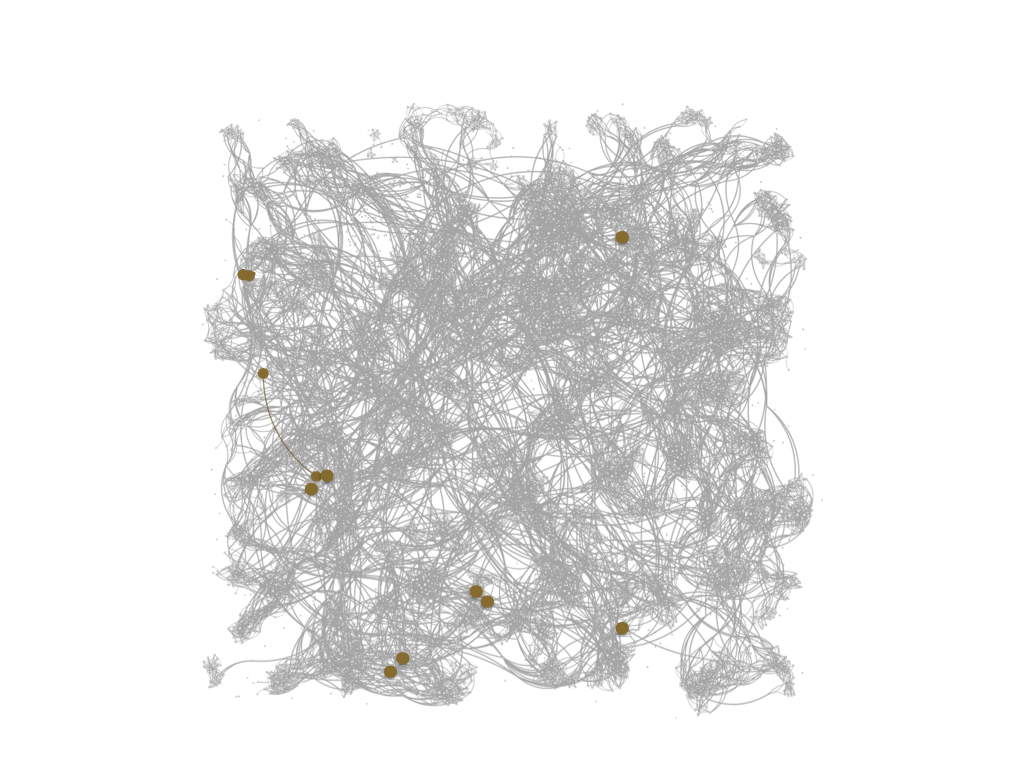 The image here is a view of all patents associated with augmented reality, headgear, and virtual reality; while the number of patents was relatively small, they do give a glimpse into the company’s internal research and development over time.

Some patents appear to focus on communication and feedback methods, while a few specifically mention AR.

The first patent is a method for generating and synchronizing interactive augmented reality displays. Another focuses on a processor, coupled to onboard motion sensor and cameras, to model computer-generated imagery representing objects depicted in video. Finally, an electronic system for adjusting display frame rates is based on variable frame-rate modes, where dynamic display content corresponds to augmented reality content overlaid on data captured from a camera. 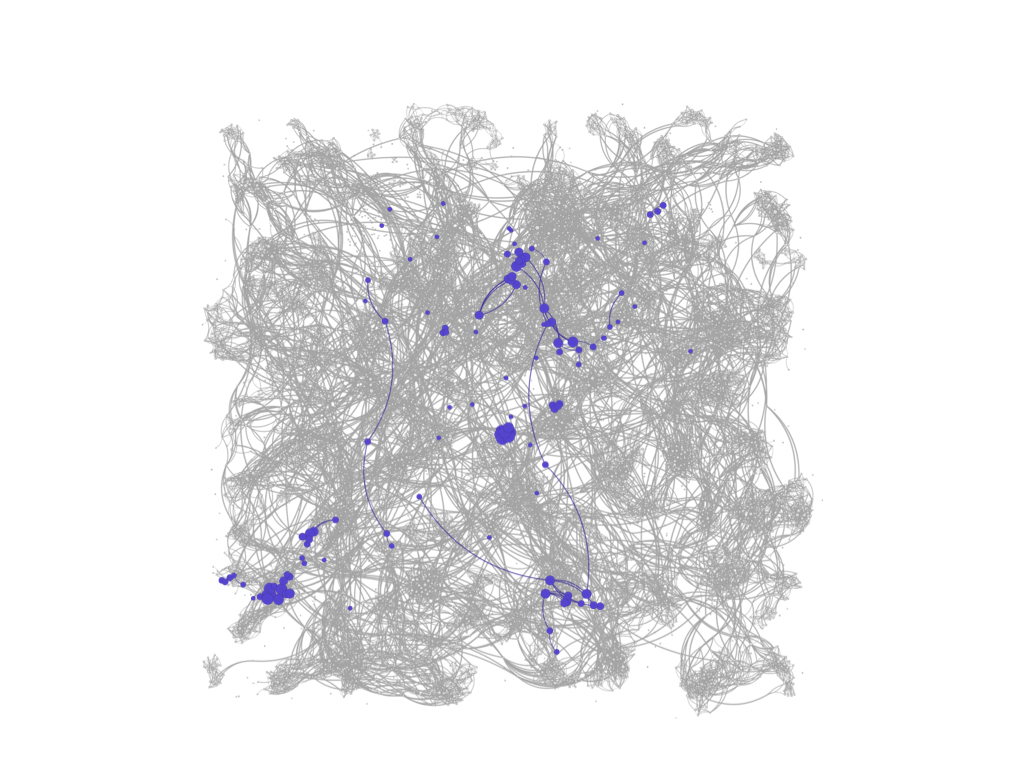 While Apple may not be acquiring many health-related companies, it is filing plenty of patents in the space — most around the Apple Watch.

A large number of patents focused on wearables and heart rate tracking. One patent was an electronic device for detecting user’s cardiac signal, tied to the news article we found. There are also several patents filed around computer-implemented methods for aggregating and sharing wellness data, which correlates to the Gliimpse acquisition. 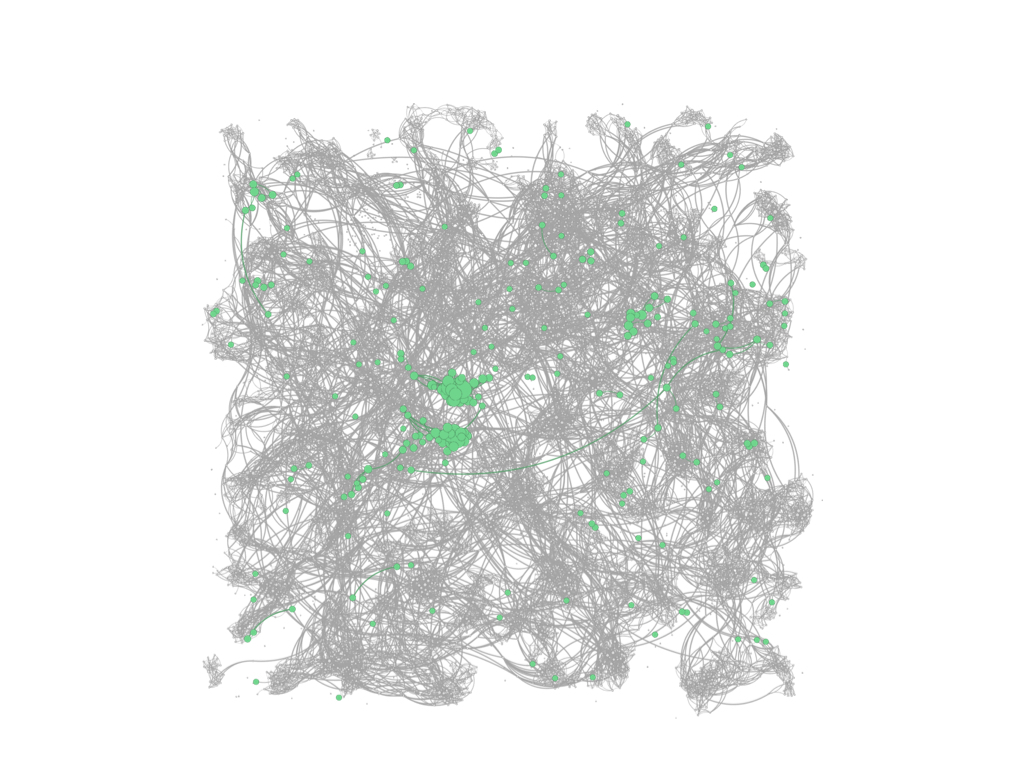 The final focus area is the autonomous car, where there appeared to be more than 200 patents explicitly tied to cars. Patents dealing with machine interfaces, integrated circuits, circuit boards, data processing, location data, wireless devices, three dimensional technology, and fingerprint clusters can all be applied to both phones and computers.

But it’s not much of a leap to see how they could also apply to car development. The same is true of patents in areas including mapping, motion detectors, mounted displays, sensors, and system and electrical components.

In Quid, each dataset revealed a unique story. And while the big-picture plans of a sprawling entity like Apple may change, our data gives strong signals that Apple is pushing into augmented reality, autonomous vehicles, and healthcare.

Whether you're an analyst aiming to predict future focus areas, a technology company looking to track a competitor's moves, or a consultant looking to size up an industry, doing a deep dive into all three datasets in Quid can help you triangulate on where any company — large or small — may be headed.