With nearly a third of the internet’s users watching an estimated billion hours of video per day, YouTube is as much a powerful content generator as it is a reflection of the values and interests of its diverse base. The company—equally known for its trending “challenge” videos and brand of celebrities, as it is for conspiracy theorists and misinformation—is immensely popular with younger viewers, but has faced criticism when it comes to regulating inappropriate content and protecting them. As social media giants like Facebook and Twitter similarly grapple with demands for greater accountability, how central are these issues to YouTube’s overall public narrative? And what other topics are shaping positive or negative perception of the company?

To better understand the issues around YouTube and its policies that are resonating with journalists and readers, Quid identified 2,378 news articles that mentioned the company from the past year. From these results, Quid then assessed the volume, sentiment, and social engagement rates of key topics, as well as the people most commonly associated with the site.

To start, the volume of coverage around YouTube and its child policies rose dramatically during the last six months, with a 108% increase compared to the previous six month period. Coverage more than doubled between October and November 2017, with news that brands pulled ads from the service after they appeared next to sexualized images of children. However, the company’s move to ban offending videos and accounts drew higher coverage rates than the controversy itself. In fact, Quid identified nearly as many articles on the removal of the “Toy Freaks” account—the bizarre and disturbing antics of a father and his two young daughters—as the ad removals. Other top stories included YouTube’s review of extremist content, backlash over vlogger Logan Paul’s video of a suicide victim in Japan, the Parkland shooter’s YouTube post, and accusations that the company improperly collects data from children. 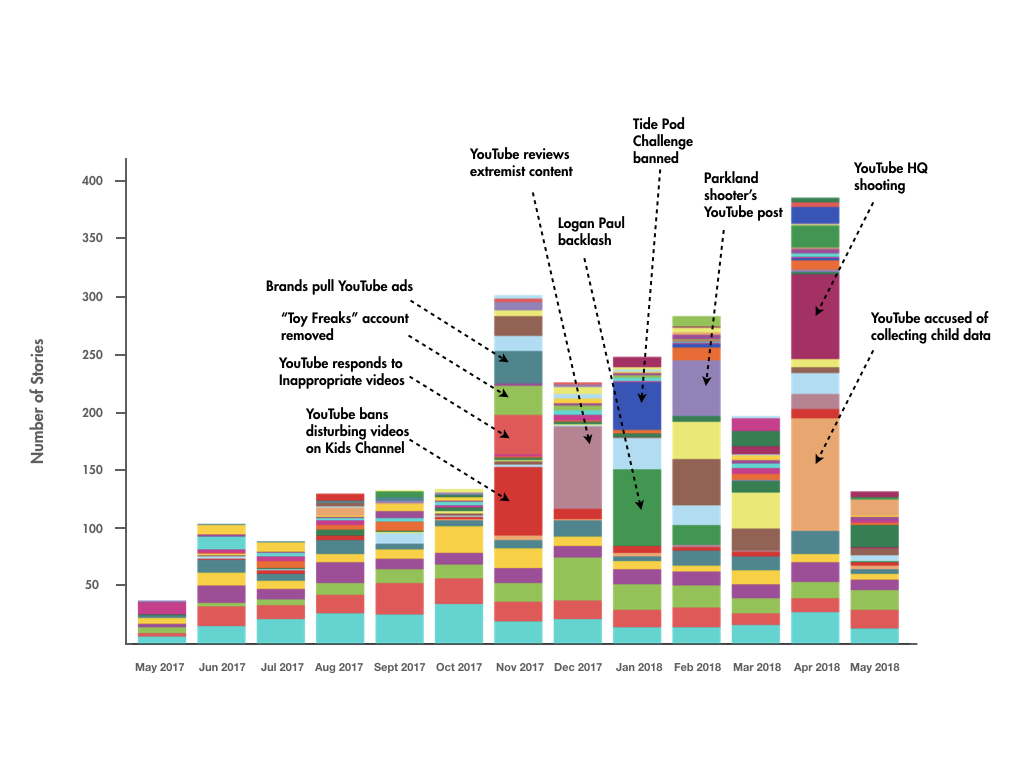 Though journalists wrote about YouTube policy actions nearly as frequently as they covered controversies involving the company, an overwhelming majority of the articles were viewed by Quid as negative or neutral. Less than 19% of all articles were viewed as positive and in the early months of 2018, more than half of all articles written about YouTube were negative. During this latter period, the company had banned videos of the Tide Pod Challenge, viewed as dangerous, and faced negative publicity over the Paul incident and the Parkland shooting. 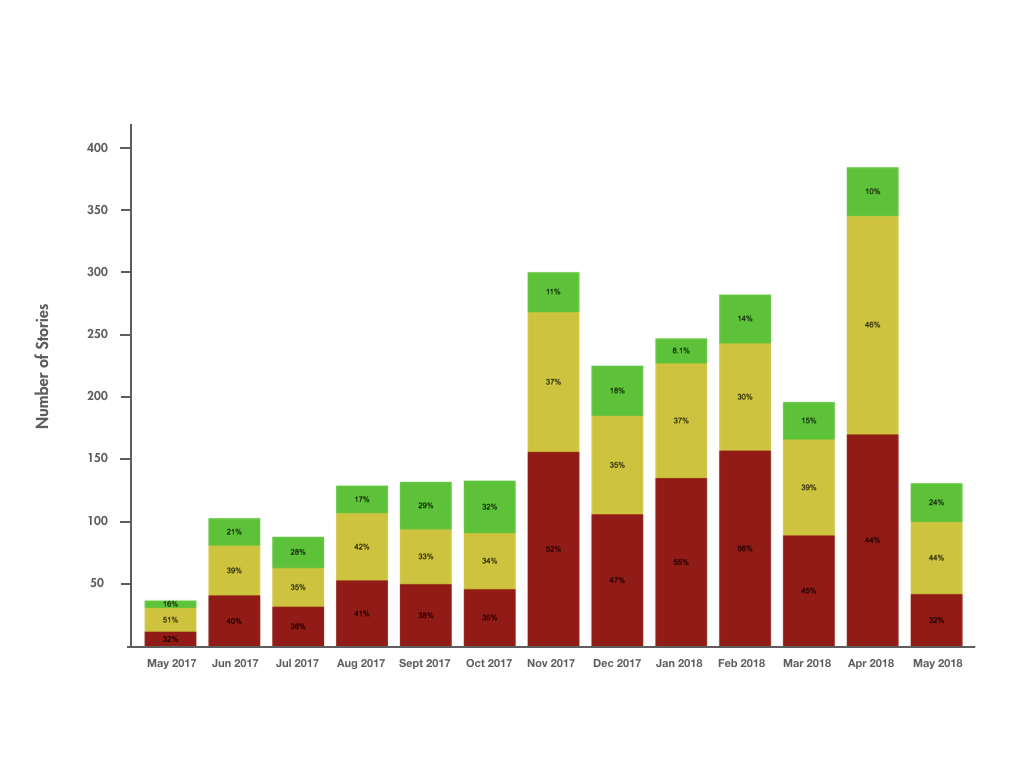 In fact, Quid found that YouTube’s indirect connections to events in the news cycle or popular culture drive often drive coverage, with emphasis on content that has been posted to the site or larger themes around social media use. Some of the largest clusters in the Quid network focus on the antics of YouTube stars or how much they earn, Trump and politics, and the ongoing debate over gun control. A cluster around cyberbullying, while sizable, mostly houses articles that discuss the issue as a persistent problem across social media platforms without specifically singling out YouTube.

Seen in the Quid visual below, stories that reflect these types of indirect connections are densely clustered along the bottom right section of the network. Topics like Education, Welfare, Pornography, and Cyberbullying, for example, are highly interwoven and central to the company’s overarching public narrative. To contrast, most news about YouTube’s direct policy actions lie on the opposite side of the network as small, tightly defined clusters. This suggests that they are generally self-contained events. 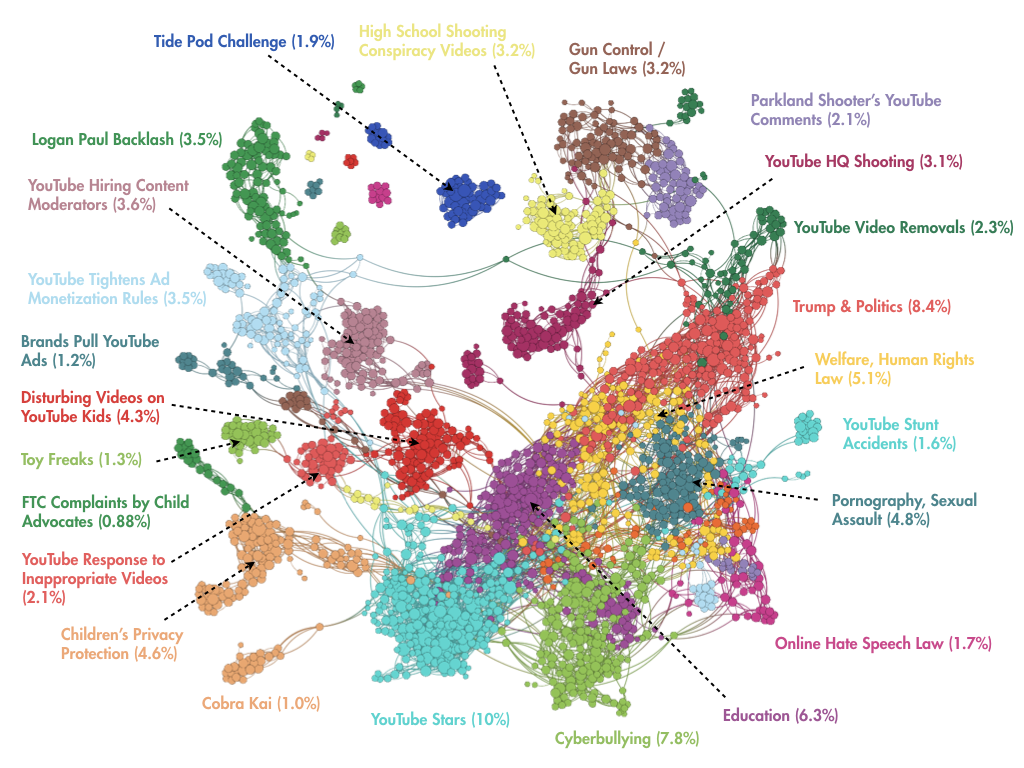 Separate from both sides and near the top of the network, a distinct set of clusters shows the recent importance of content related to mass shootings and gun control. Following the mass shooting at Stoneman Douglas High School in Parkland, Florida, for example, social engagement rates (through likes, shares, or comments) with articles mentioning YouTube spiked. Not only did news emerge that the Parkland shooter had posted about committing a mass shooting on a YouTube video, but survivors began speaking out about gun control on social media channels. Declarations that they intended to “change the laws” on gun ownership helped push social engagement rates to the highest levels seen during our one year period.

We also found that people connected to recent shootings and YouTube celebrities had an outsized influence across the company’s public narrative. Nearly as many published articles about YouTube mentioned vlogger Logan Paul as they did YouTube CEO Susan Wojcicki. Parkland shooter Nikolas Cruz and survivor David Hogg also had some of the highest publication and social media engagement rates. Other visible figures included conspiracy theorist Alex Jones; Toy Freaks dad Greg Chism; and Nasim Aghdam, the YouTube headquarters shooter. Aghdam had some of the lowest traction in published articles, but the highest engagement through social media channels. 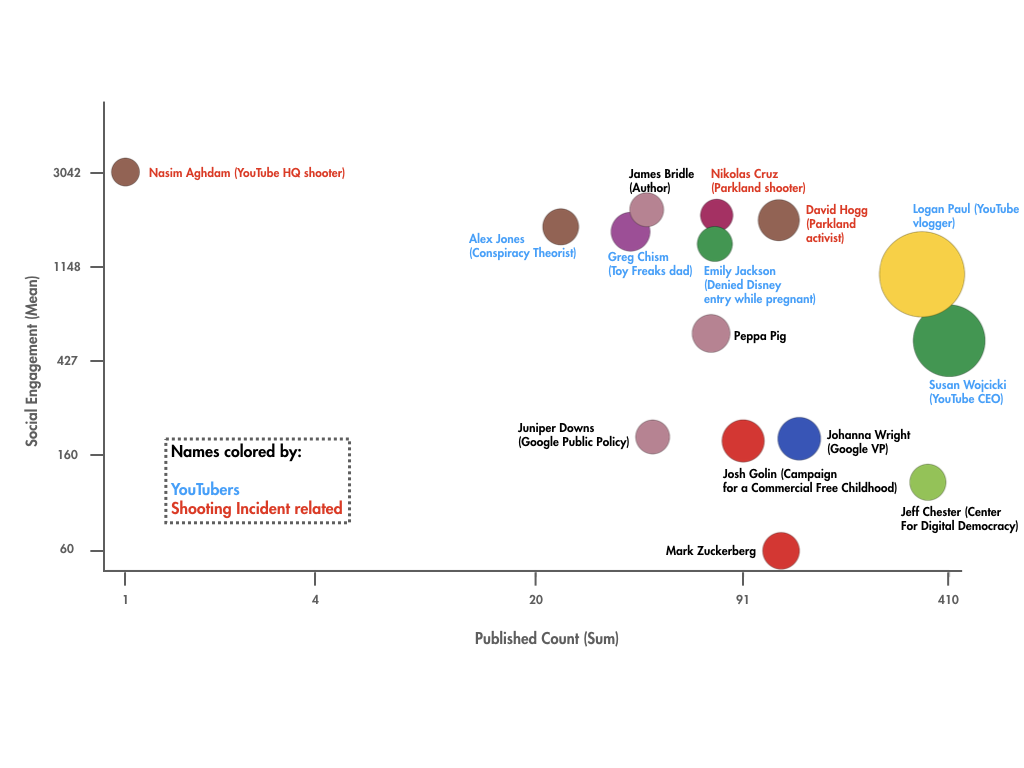 Quid allows you to gain quick insight into the issues, events, and people that are gaining traction in the media and shaping public perception of YouTube and its policies. Media coverage of the company more than doubled over the past year led by concerns over content regulation, particularly for channels targeting children, and YouTube’s response. The increased influence of social media celebrities and prolonged visibility of gun violence activism were also largely responsible. Articles commonly associated YouTube with people from both categories, including popular vlogger Logan Paul and student activist David Hogg.

Want to learn more about your company’s public narrative? Drop us a line at hi@quid.com.

Case Study Guilty by association? Here are the companies impacted by New Delhi's air crisis
Tejas Sirohi & Maggie Mazzetti
How To Understand what the world thinks and feels.
The Quid Team
Examining the News What is the future of sustainable packaging?
Quid Staff