From playful apps to city-wide bans, facial recognition has captured headlines and investor interest over the last few years. With numerous applications—including across the health, security, finance, and education sectors—companies are quickly jumping in. But recent developments, particularly in the areas of security and law enforcement, have raised important ethical questions that remain unanswered. Is this technology a security measure that will keep us safer as we become more digitally integrated, or are we merely facing another invasion of our personal privacy?

To gain a deeper understanding of the issues driving news coverage and the changing industry landscape, Quid analyzed all articles written on the topic from the last six months, as well as the nearly 1,000 companies who self-identify as working in the space.

From more than 2,500 articles written on facial recognition software during our given time period, police use of the technology represented a quarter of all coverage.

Seen below, the cluster of stories on police force use (in green) included news on the South Wales and Metropolitan Police forces (UK), as well as the FBI. Freedom of Information requests showed that the facial recognition technology used by the Metropolitan Police had a remarkable 98% error rate when used, while the South Wales Police saw 92%. Despite greater overall accuracy, the FBI has also received criticism for using drivers’ license photos from the DMV database in facial recognition searches. 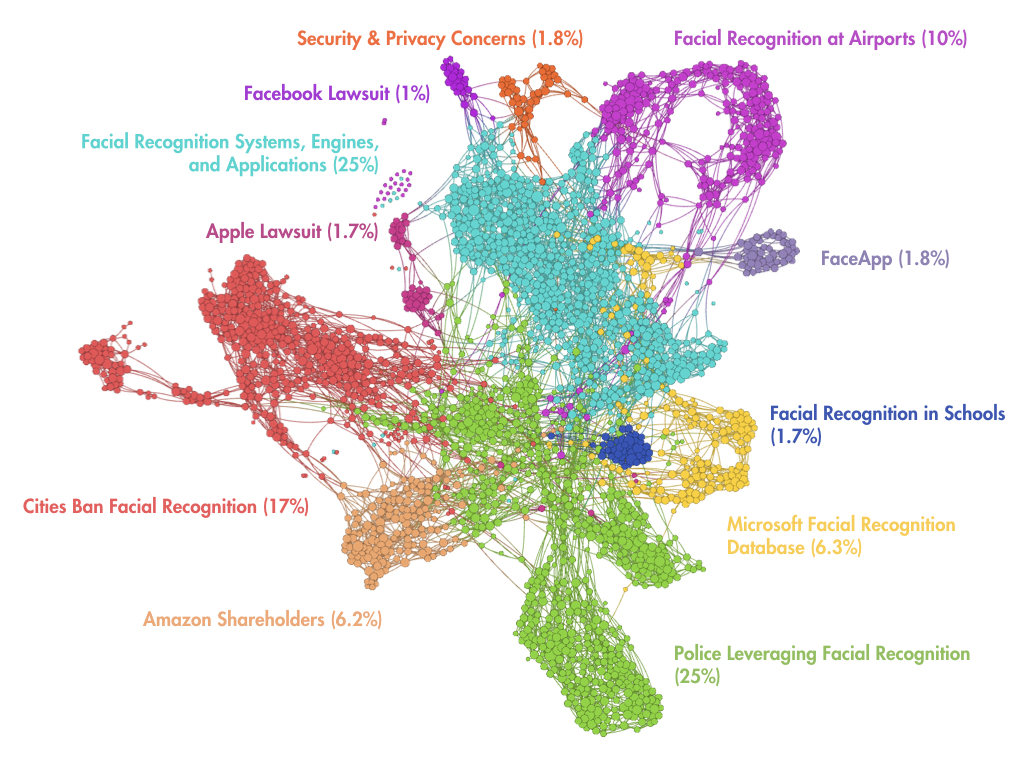 Prior to May of this year, articles written on facial recognition generally took a more positive stance with a focus on industry news and developments. However, coverage spiked in May with more stories written than the previous three months combined, buoyed by the news that cities like tech-savvy San Francisco planned to ban the use of the technology by police and other agencies. 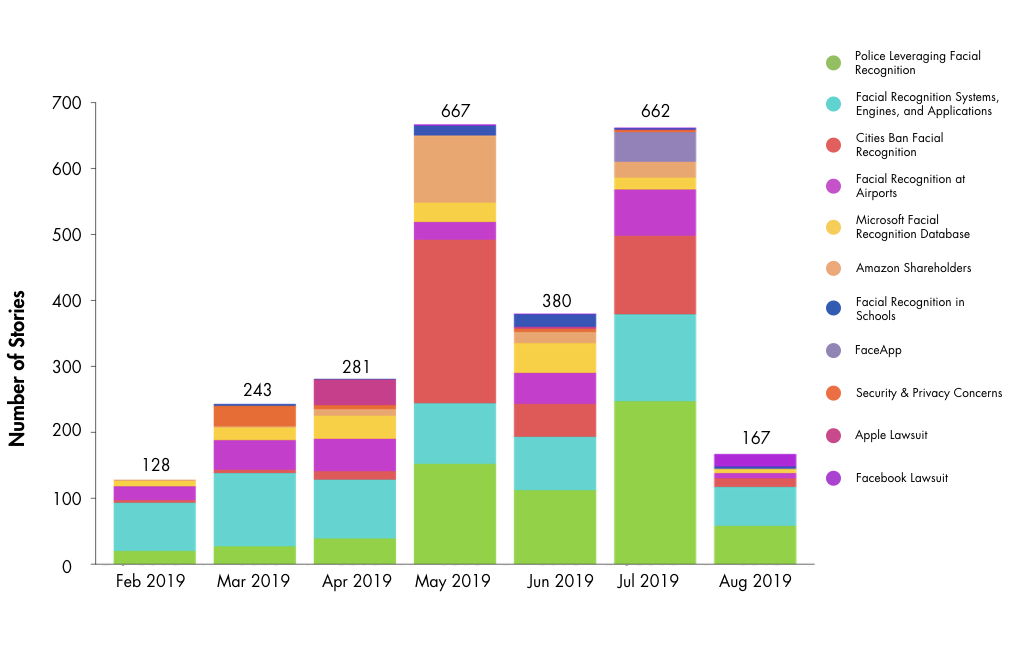 Timeline of news coverage on facial recognition from February 2019 to August 2019. Colored by cluster.

This period also marked a definite shift in tone, as the civil liberties concerns raised by these policies also began to surface in other topic areas. In that same month, for example, Amazon shareholders considered a vote to block sales of the company’s facial recognition tech to governments unless they could guarantee no risk of human rights violations. The number of articles rose around police department use and then peaked in July with headlines like UK Police Recognition Could Target ‘Literally Anybody’ and Facial Recognition Used By Police Fails To Correctly ID Suspects.

The months that followed the San Francisco ban also saw an overall decline in positive coverage. Prior to May 2019, stories that presented facial recognition technology in a positive light represented roughly half of all those written. However, this rate fell to just below a third, on average, from May to August. 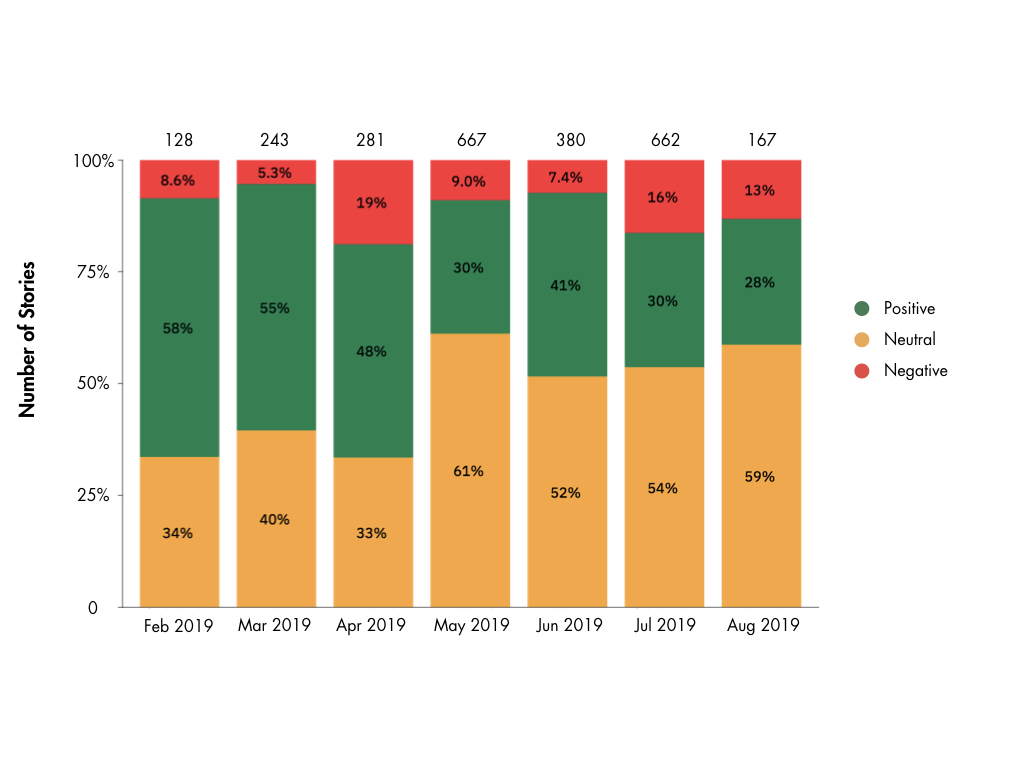 Timeline of facial recognition news coverage from February 2019 to August 2019. Colored by sentiment.

Facial recognition is a polarizing topic

When looking at the sentiment of articles written about facial recognition – whether they are written using positive or negative language –  each distinct topic cluster appears to attract largely favorable or unfavorable coverage, with few areas up for debate. Seen below, stories about police force use and the Amazon shareholders vote on restricting access to governments with poor human rights records were neutral and negative, while industry updates (Facial Recognition Systems, Engines, & Applications) were almost always positive.

One area that attracted more diverse coverage was the city bans, with some stories discussing regulation rather than outright bans, and others mentioning that even a leading body camera manufacturer had banned facial recognition technology from its product lines. 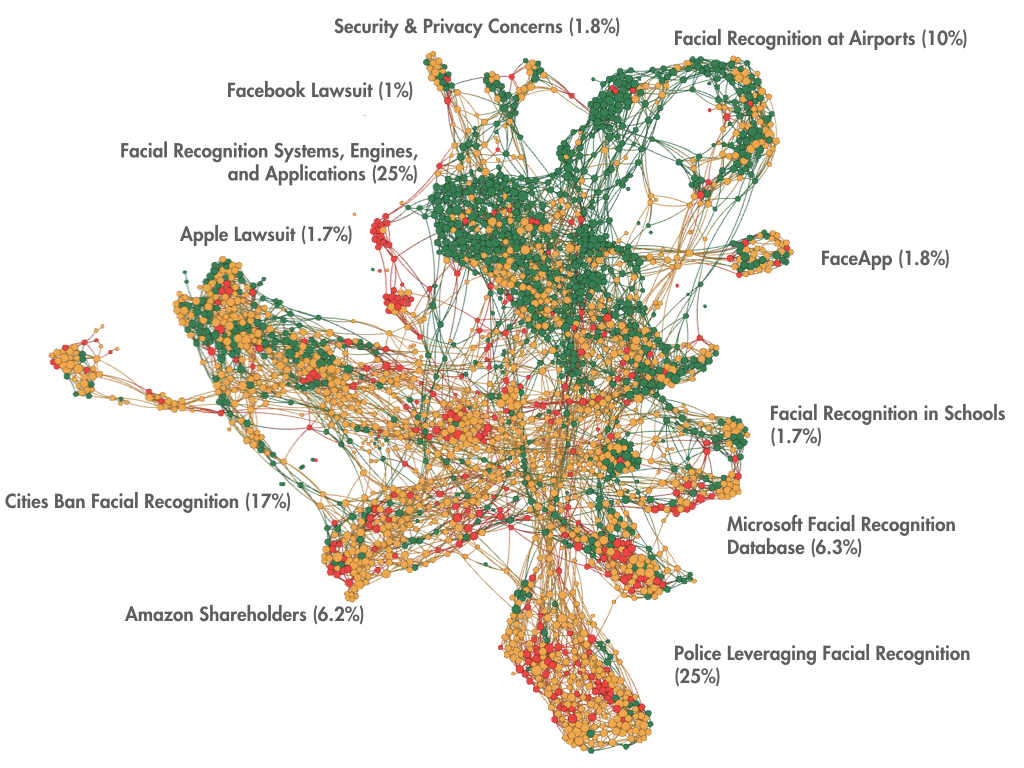 Coverage and interest varies across countries

While truly a global story, facial recognition has seen varied coverage by country.

In the UK, discussion around whether or not police forces can use facial recognition technology has dominated the narrative. Deemed a “potential threat to privacy” and a “high priority area” by the Information Commissioner’s Office (ICO), the accuracy of technology has been called into question.

In India, FaceApp news generated nearly 20% of all coverage (percentage-wise, more than all other countries combined) with several Indian celebrities taking up the FaceApp challenge and some users reporting issues in downloading the app. The use of facial recognition in airports also drew higher coverage after the introduction of a Facial Recognition System in the Rajiv Gandhi International Airport in Hyderabad and a forthcoming installation in New Delhi’s Indira Gandhi International airport.

In France, news coverage of the topic tended to skew toward privacy and security concerns, with a heavy focus on its use in schools and airports, ongoing lawsuits, and city bans. 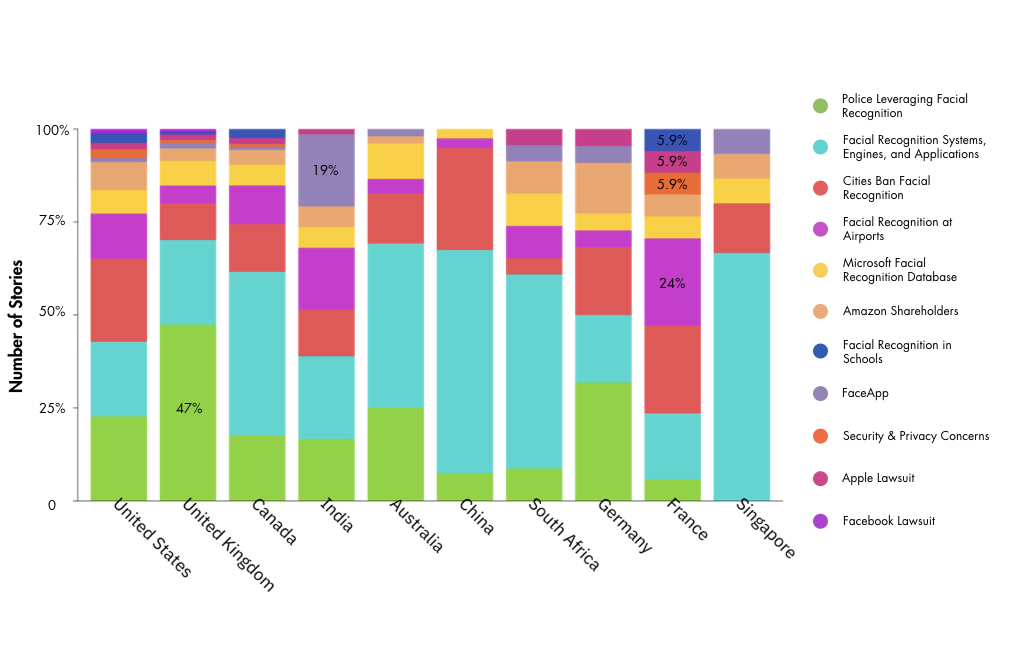 Timeline of popular news topics by country. Colored by cluster.

Top companies attracting coverage in the media around these issues are a mix of tech giants, large companies, and those that are major topics of discussion like FaceApp.

Seen below, Apple Inc. saw the largest percentage of negative coverage after a teenager sued the company for $1 billion, claiming he was wrongly arrested by security teams using Apple's facial recognition software.

In contrast, Japanese firm NEC received high rates of positive coverage for providing its facial recognition system to E.Sun bank's ATMs, delivering a security system based on facial recognition at an informal EU Summit, and signing an agreement with the Star Alliance airline network to “develop a biometric data-based identification platform.”

Reporters also wrote favorably about CyberLink after the company showcased its cross-platform AI Facial Recognition Engine, FaceMe, along with a range of smart retail, smart security, and smart city solutions. FaceMe, powered by deep neural network algorithms, recently achieved a 98.4% accuracy rate. It provides cross-platform capabilities, supports Windows, Linux, Android, and iOS, and can be integrated into edge devices for customized applications. FaceMe has also been integrated in the Ayuda service robot by Syscom Group. 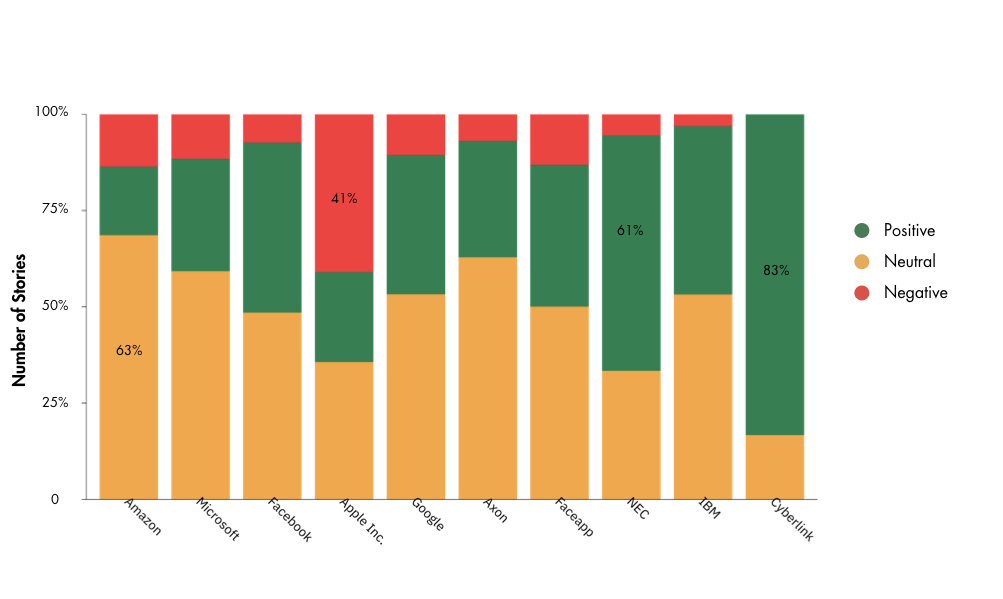 Timeline of facial recognition coverage by company. Colored by sentiment.

Are the applications and companies most visible in the media also leading the industry when it comes to growth and investment or does the space look quite different? Quid analyzed nearly 1,000 companies that report to work on facial recognition to get a bird’s eye view of the industry landscape and better understand focus areas for acquisition and investment.

The lion’s share of investment ($6.7 billion) in the facial recognition industry is going to a relatively small, but elite group of companies (to include Microsoft, Intel, and Amazon) focused on Software & IT Support Services. However, the industry has been rapidly diversifying in recent years—expanding from three distinct focus areas in the early 2000s to the 16 found today. Other top investment areas include: Security & Video Surveillance ($3.7 billion), Social Networking ($3 billion), and Store Operators, Retail Vendors, & Vending Machines ($1.6 billion).

Companies within the Store Operators, Retail Vendors, & Vending Machines category have done well for themselves, despite being the new kids on the block. These companies, on average, have the most recent founding year. One example, Yum China Holdings, Inc., owns, operates, and franchises restaurants in China and has attracted the most investment in the group with a $460 million investment in 2016. In November 2018, the company expanded the use of its "Smile-to-Pay" facial recognition payment technology to more than 300 KFC stores across the country. 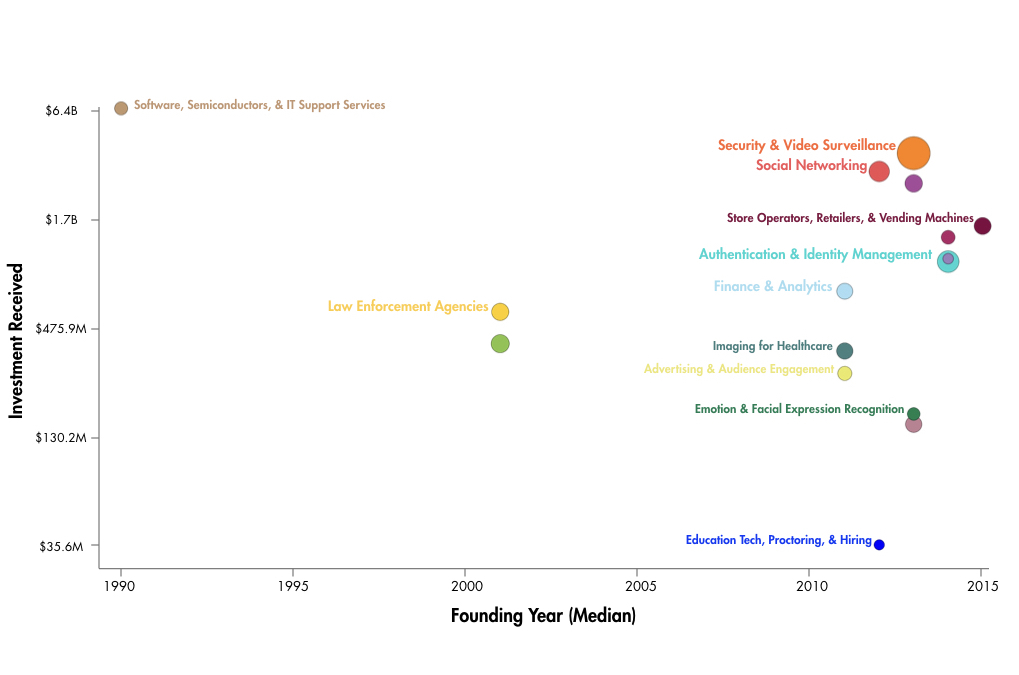 Scatterplot of the maturity of companies working on facial recognition technology. Colored by cluster.

Representing 17% of all companies in the space, Security & Video Surveillance is also a major topic driving discussion in the media. Similarly, three other areas that drew media attention—Authentication & Identity Management (9.7%), Social Networking (8.8%), and Law Enforcement Agencies (6.7%)—also fell within the top 6 largest categories, making them potentially vulnerable to prolonged negative coverage. Conversely, EdTech, Proctoring, & Hiring, which drew some coverage, especially in France, actually had an outsized presence in the news media, given its position as the smallest industry segment (1.8%).

Other notable areas that are relatively insulated from media attention included AR and VR (6%), Imaging for Healthcare (5.9%), Finance & Analytics Solutions (5.8%), and Driving Safety (2.1%). 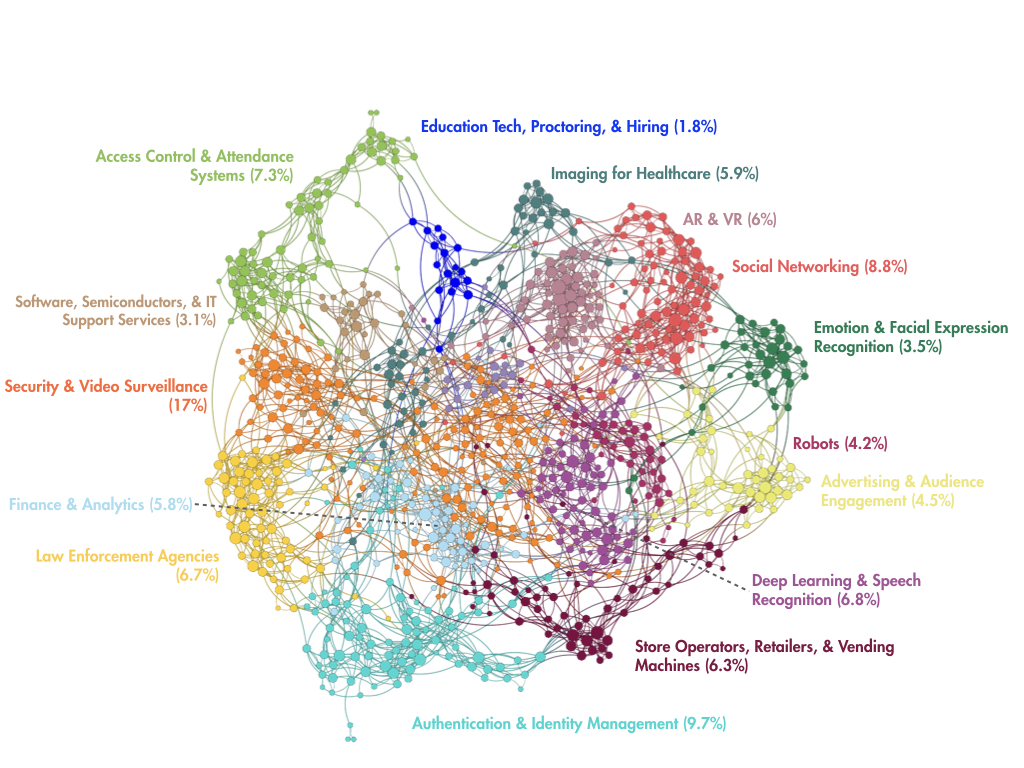 What about companies like Apple, Amazon, Facebook, and Google that were highly visible within the media narrative? Turns out that a number of them are definitely moving to expand within the industry, but few in areas that are currently attracting negative media attention.

Apple, for one, had the second highest number of acquisitions (5), including two companies in more sensitive categories such as Authentication & Identity Management and Security & Video Surveillance. RealFace is an Israeli company that develops biometric logins for mobile devices.  Apple also acquired Silk Labs, which uses AI to detect people and faces within image and audio. Alphabet, Google’s parent company, has acquired three companies working on facial recognition, including Pittsburgh Pattern Recognition, which can match people across photos and video for identity management, fraud detection, and people counting.

A number of companies have managed to maintain low media profiles despite also making moves to expand within more controversial areas. Thales, one of the world’s leading providers of advanced electronic systems and equipment for the defense and commercial aerospace industries picked up two companies involved in Authentication and Identity Management in a bid to become a global leader in digital identity and security. Thales also acquired 3M Cogent, which develops biometric identification for governments and law enforcement agencies.

Also flying under the radar is Oberthur Technologies, the most active acquirer in the industry. The former French digital security company merged with Morpho to form IDEMIA on 28th September 2017. Since then, the company has strongly focused on acquiring companies with law enforcement and security applications, including A4Vision that develops 3D face readers for airports, sporting events, and other uses, and has image storage and distribution capabilities. 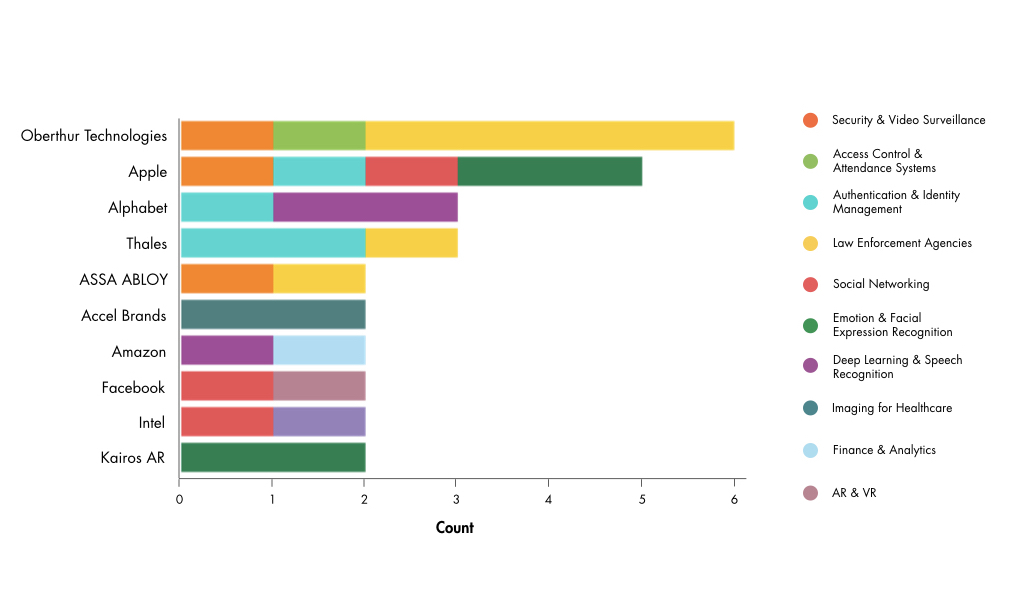 Bar chart of top acquirers in the facial recognition industry. Colored by cluster.

Facial recognition technology is finding wide applications across a number of key industries, even more than we’re hearing about in the media. Not without its controversies, particularly in the areas of privacy, safety, and civil rights, it also has shown to be effective as another layer of security for banking, healthcare, and even education. Even so, coverage has been polarizing and companies mentioned in the news only represent a handful of those who are actively working on more sensitive applications like security and law enforcement.

Want to learn more about how you can use Quid to analyze your industry? Send us an email at hi@quid.com.